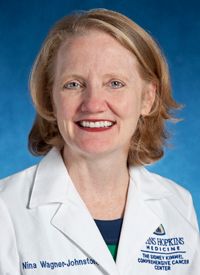 Researchers using cell-of-origin (COO) classification connected dual expression (DE) of the proteins MYC and BCL2 with poorer survival in patients undergoing chemotherapy for diffuse large B-cell lymphoma (DLBCL). However, CCO failed to identify a prognostic subgroup, the study’s primary endpoint, according to results published in the Journal of Clinical Oncology.

Lead study author Annette M. Staiger, PhD, University of Tübingen, Germany, and coauthors wrote that these findings challenge “the broad applicability of COO testing for the identification of high-risk patients.”

In RICOVER-60, patients older than 60 years (n = 949) were assigned to 6 or 8 cycles of cyclophosphamide, doxorubicin, vincristine, and prednisone every 2 weeks (CHOP-14) or the same regimen plus 8 applications of 375 mg/m2 of rituximab (R-CHOP-14). Six cycles of R-CHOP-14 was associated with significantly improved event-free survival, PFS, and OS. There was no benefit of response-adapted chemotherapy beyond 6 cycles.

In R-MegaCHOEP, patients younger than 60 years (n = 202) were treated with 8 cycles of cyclophosphamide, doxorubicin, vincristine, etoposide and prednisone repeated every 2 weeks (CHOEP-14) or to sequential high-dose therapy with 4 cycles of MegaCHOEP-21 (high-dose CHOEP repeated every 3 weeks) supported by repeated infusions of autologous stem cells.

DE status was associated with significantly inferior survival compared with non-DE within the GCB, but not within the ABC subgroup. DE status was associated with significantly inferior outcomes compared with patients with ABC-like DLBCL without DE and compared with patients with GCB-like DLBCL without DE. When researchers analyzed data from patients who were not dual expressers separately, the outcome of patients in the ABC subgroup was inferior to that of patients in the GCB subgroup (5-year PFS rate, 68% [95% CI, 52-85] vs 85% [95% CI, 74-96]; P = .04]).

Compared with nonexpressers, patients with DE status had significantly inferior survival in R-CHOP—treated GCB-like DLBCL (P <.001 for each outcome of event-free survival, PFS, and OS) and with patients who expressed BCL2 alone. Investigators did not observe that result in the ABC group.

Researchers found no significant difference between ABC-like and GCB-like DLBCL in groups without MYC/BCL2 DE for event-free survival, PFS, or OS.

“I don’t think this tells us the tool is not important—I think it is important. But I think the cell of origin is really going to interplay with double expression and double-hit,” she said.

“The findings were contrary to what we would expect if you look at the prior retrospective studies, which showed that the cell-of-origin had prognostic impact. Looking at a new modality, perhaps that isn’t the case,” Wagner-Johnston added. “Perhaps those retrospective studies were off-base. This is really important in terms of how we’re looking at design of clinical trials. It was very interesting that you had to exclude the double-expressing lymphoma patients to actually see any prognostic impact. Not surprisingly, the findings demonstrated worse outcomes for double expressers with GCB, but surprising that wasn’t the case with ABC. There’s some unique findings with the study.”

Nina Wagner-Johnston, MD, associate professor of oncology at the Johns Hopkins University School of Medicine, agreed to review the data for OncLive. She said this is one of the first studies using the Lymph2Cx assay tool and the results produced some unexpected findings and highlight the complexity of prognosticating in DLBCL.