Ryan W. Jacobs, MD, discusses the use of small molecule inhibitors in the treatment of patients with chronic lymphocytic leukemia. 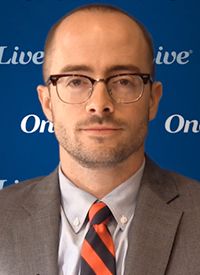 There have been major breakthroughs in the treatment of patients with chronic lymphocytic leukemia (CLL), explained Ryan W. Jacobs, MD, such as the addition of the small molecule inhibitors ibrutinib (Imbruvica), venetoclax (Venclexta), and idelalisib (Zydelig).

However, Jacobs said that until physicians have head-to-head data, ongoing discussion of emerging and clinically pertinent findings and their effect on treatment decisions is critical.

With the FDA approval of frontline ibrutinib in March 2016, Jacobs says that single-agent ibrutinib seems to “level the playing field” for those higher-risk patients who are not going to see the same results with chemoimmunotherapy.

In the relapsed/refractory CLL setting, results from the phase III MURANO trial presented at the 2017 ASH Annual Meeting showed that combination therapy with venetoclax and rituximab (Rituxan) significantly lowered the risk of disease progression or death compared with bendamustine and rituximab (BR).

“I feel like this is a real ‘game changer’ in the treatment of relapsed patients with CLL. It's the first study that has a chemotherapy-free approach compared with chemotherapy,” said Jacobs.

OncLive: How have these inhibitors impacted the treatment paradigm?

All indications have shown that when we do a workup and look at the genes of patients with high-risk prognosis using FISH analyses and IGHV analyses, these patients do worse with chemoimmunotherapy. These are the patients with 17p deletion, 11q deletion, trisomy 12, and unmutated IGHV; they have less return on historical treatments with chemoimmunotherapy but with all the same toxicities. In my practice, I am swayed to use a more novel approach like ibrutinib in these particular patients.

In the relapsed setting, I focused on showing the available data that we have and looking at comparing and contrasting the 3 different agents that we have available. There is less debate between chemoimmunotherapy and novel agents in the relapsed setting because chemoimmunotherapy did not do well for patients once they had been exposed to prior treatments.

Thankfully, we have much better treatments now with ibrutinib, venetoclax, and idelalisib. I highlighted the data that are out there for these patients, specifically the most recent publication on venetoclax and its use in combination with rituximab. It was compared with bendamustine and rituximab, and venetoclax/rituximab significantly outperformed it, not surprisingly.

It's significant in that sense. It's also significant in the sense that it's the first treatment with a new small molecule inhibitor that involves defined treatment timelines. Patients on that study were only treated with venetoclax for 2 years and rituximab for 6 months toward the beginning of treatment. Therapy was stopped in responding patients after 2 years. There has been hope for a long time that we can get away from recommendations for indefinite treatment because small molecule inhibitors are expensive and have toxicities.At Levine Cancer Institute, rates of chronic GVHD are quite low with our approach of using posttransplant cyclophosphamide. For patients who ultimately develop chronic GVHD that is refractory to steroids, ibrutinib represents the first and only approval by the FDA for this population.

How does acalabrutinib compare with ibrutinib in this setting?

That trial was designed to ultimately ween successful patients off of ibrutinib, though it's not an indefinite indication. This is, again, another group patients who traditionally had very poor outcomes without any FDA-approved options beyond steroids. This is definitely a patient group with an unmet need that now has a good FDA-approved option to try. Ultimately, we'll get our answer on the CLL side because there is a large phase III trial that has completed accrual. This trial will be a head-to-head comparison of ibrutinib and acalabrutinib in the treatment of patients with relapsed CLL. That trial might take a while to report out because these agents, as we've seen with ibrutinib and we can presume with acalabrutinib, are very good treatments. Patients do well for long periods of time.

Is acalabrutinib the sole second-generation BTK inhibitor that has demonstrated efficacy in patients with Richter’s transformation?

This might be a trial that takes many years to see any substantial differences in terms of efficacy. We might be able to differentiate toxicity sooner. What I fear is, by the time that trial gets reported out, the field will have already moved on to other interesting combinations between the BTK inhibitors and BCL-2 inhibitors that are already available—perhaps a monoclonal antibody thrown in there. These are good problems to have. In CLL, there are lots of new options and opportunities for patients who previously didn't have any.In general, single-agent BTK inhibitors in high-grade lymphomas have not been impressive. Ibrutinib has had activity in activated B-cell diffuse large B-cell lymphoma and has been looked at with combinations of either chemoimmunotherapy like RICE [rituximab, ifosfamide, carboplatin, and etoposide] or non-chemoimmunotherapy approaches, such as lenalidomide (Revlimid) and rituximab.

I have not seen the data for acalabrutinib in Richter’s transformation. Generally speaking, Richter’s transformation does not respond to [many agents]. As a first-line approach, we try to give these patients combination chemoimmunotherapy. Our preference is dose-adjusted R-EPOCH [rituximab, vincristine, doxorubicin, prednisone, and cyclophosphamide].

What are the data on the combination of ibrutinib and obinutuzumab?

There are data that PD-1 inhibitors, such as pembrolizumab (Keytruda), have activity. For patients who are refractory to chemoimmunotherapy or maybe not fit enough to tolerate those more intensive approaches, we think about PD-1 inhibition. I would not expect robust responses from single-agent BTK inhibition in this population.At this point, I have not seen any data that have convinced me that adding anything to ibrutinib is better than ibrutinib by itself. We have the HELIOS data, which looked at BR versus ibrutinib plus BR. Not surprisingly, ibrutinib plus BR was significantly better. Unfortunately, that trial did not have a comparator arm of single-agent ibrutinib.

A cross-trial comparison compared patients who received ibrutinib plus BR to a matched group in the RESONATE study, which examined single-agent ibrutinib in the relapsed setting. The curves seemed superimposable, so I've not found that chemoimmunotherapy adds much.

What is clear is that, when you add a monoclonal antibody, you quicken the response. Does that ultimately make a difference when you're not at the point of treatment discontinuation in patients treated with ibrutinib? Does speeding up the response in the long run, if the duration of response is the same, ultimately make a difference? I would have to see some pretty compelling data to convince me that it does; at this point, ibrutinib functions more in terms of long-term disease control, rather than a fast and deep response.