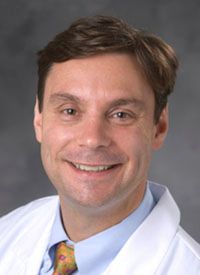 While hormonal-based therapies are a standard component of the treatment landscape of metastatic castration-resistant prostate cancer (mCRPC), other agents are available for first-line use that have the potential to improve outcomes, explains Daniel J. George, MD.

For example, drugs that should be incorporated earlier into a treatment sequence for patients, especially those who are asymptomatic or minimally symptomatic, includes the cellular immunotherapy vaccine sipuleucel-T (Provenge), radium-223 dichloride (Xofigo), docetaxel, and cabazitaxel (Jevtana).

“All of these strategies are much better tolerated when we’re proactive in treating them before those symptoms have deteriorated performance status,” said George, a medical oncologist at Duke Cancer Center.

OncLive: What did you highlight in your presentation on mCRPC?

You mentioned earlier that this poses a challenge. In what way?

George lectured on the timing and use of non-hormonal—based strategies during the 2017 OncLive® State of the Science SummitTM on Genitourinary Cancers. In an interview during the event, he spoke to the major questions practitioners are asking regarding optimizing upfront therapy for patients with mCRPC.George: For advanced prostate cancer, particularly mCRPC, there has been a tremendous amount of progress in the last 7 years. With 5 new agents now approved, all demonstrating improvement in overall survival coupled with our historical docetaxel chemotherapy, we now have tremendous flexibility and variety in how we can treat and sequence patients with mCRPC. The problem with all of that is with that variation and flexibility comes perhaps the inability to recognize when different kinds of sequences are [available]. There is a tendency to form a habit of treating everybody the same. We do this partly because in prostate cancer, for the most part, hormonal therapy is the mainstay of treatment for patients who relapse on local therapy.

What are some of these strategies?

We get into a bit of mindset of thinking that hormonal therapy is the only therapy these patients need. Interestingly, when patients become castration resistant, the most common pathway, or most common mechanism of that resistance, is still hormonal-based. It is just a thought in many of our patients to consider further, secondary hormonal therapies, with drugs such as enzalutamide (Xtandi) or abiraterone acetate (Zytiga) and to continue to use those agents. There are additional strategies besides targeting the androgen receptor pathway that improves survival in prostate cancer.One of those [strategies] should be used upfront, and that is sipuleucel-T. It is an immunotherapy. It is a vaccine, if you will—an autologous cellular immunotherapy that can help stimulate recognition of tumor antigen proteins, which are associated with prostate cancer for the immune system to engage. It has been shown to improve survival, particularly when used early in the disease course. Some of the latest work from larger registry studies suggests that that early-stage population [of patients] is really the one that get the greatest absolute benefit.

If you look at the NCCN guidelines, the first decision for patients with mCRPC with low tumor burden who are asymptomatic or minimally symptomatic is whether or not to get sipuleucel-T. That is where we like to place it—not last or later, but right up front. Patients can then transition quickly into their second-line hormonal therapy.

What evidence do we have to support this?

[We need to] recognize that, for this patient population, there are a number of patients who will develop some declining functional status. That might not be necessarily associated with the hormonal therapy; that can be associated with disease progression. Unfortunately, our practice has been to switch from one hormonal therapy to another all too often, and save the more cytotoxic strategies, such as chemotherapies or radiation-based therapies like radiopharmaceuticals, including radium-223 dichloride, for later.The best data come from our pivotal trials of enzalutamide or abiraterone in the chemotherapy-naïve setting. The median time to prostate-specific antigen (PSA) progression in both studies is about 11 or 12 months. Incidentally, the median time to decline in functional status is also about 11 or 12 months. However, patients stay on study until, on average, radiographic progression 6 months later at 16 or 18 months. On those studies, they don’t typically start chemotherapy until another year later.

Typically, overall survival for that population is shortly thereafter, suggesting the benefit to that cytotoxic therapy was really limited. This was done in a study population from around the world— Western Europe and the United States&mdash;and it was done by academic groups like ourselves. Moreover, it was done before radium-223 was available.

Therefore, where does docetaxel or cabazitaxel fit in? We believe these agents fit much earlier— either for chemotherapy in the upfront, metastatic hormone-sensitive setting instead of hormonal therapies, or in conjunction with hormonal therapies. Or, [they fit] for patients who are becoming symptomatic with visceral disease very early on.

For patients with bone-only disease, there is an option to use radium-223 for its survival benefit—not just for its pain management. [It can be given] perhaps in conjunction with those oral hormonal therapies when PSA is beginning to rise or when those symptoms are beginning to drop well before the radiographic progression occurs. We [should be] thinking of that agent as a 6-month window to treat for a survival benefit&mdash;not for pain palliation.

If you use those agents early, you can use them in sequence. We know that we can use docetaxel followed by cabazitaxel and see survival benefits. We know that radium-223 can be used after chemotherapy.