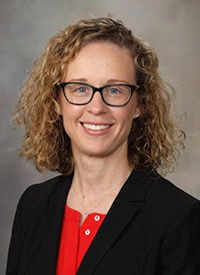 Sentinel node biopsy is a safe and effective way to identify patients with low-grade endometrial cancers, and potentially those with serous and clear cell histologies, who are either at risk of or have nodal metastasis, according to Carrie L. Langstraat, MD.

“We feel that doing sentinel lymph node [biopsy] really allows us to identify the patients who have lymph node involvement, so we can treat them appropriately without the risk of lymphedema or complications that we see with full lymphadenectomy,” explained Langstraat, who is a gynecologic oncologist at Mayo Clinic.

In an interview with OncLive, Langstraat discussed the role of sentinel lymph node biopsy in endometrial cancer.

The biggest debate prior to the use of sentinel lymph node [biopsy] was whether lymphadenectomy was therapeutic or prognostic. We wanted to identify patients who had lymph node involvement, so we could treat them with active therapy and reduce their risk of recurrence.

However, lymphadenectomy as a whole is very morbid, leading to increased time in the operating room, increased risk of blood loss, and increased risk of complications—including lymphosis in the pelvis and lymphedema&mdash;which can impact a patient’s quality of life. Lymphedema is swelling in the lower extremity, which can sometimes be mild. The majority of the time, patients would use [compression] stockings to treat that, but sometimes it could really limit their functionality.

How should patients with positive sentinel nodes be treated?

That is a big gray area at this time. We are typically presented with 3 different [scenarios]: patients who have tiny tumor cells throughout their lymph nodes, those with micrometastases that are quite small—less than 2 μm&mdash;and patients with larger macrometastases in their lymph nodes. No evidence on how we should treat these patients [really exists]. Most of us use data from other Gynecologic Oncology Group trials or from European trials that looked at patients who had stage III disease, because those who have positive sentinel nodes have stage IIIc disease. Those patients do best with chemotherapy with or without radiation therapy. As such, at this time, without better data, we should treat patients with chemotherapy with or without radiation.

What is your key takeaway regarding the use of sentinel lymph node biopsy in endometrial cancer?

At this time, our data support that sentinel node [biopsy] does identify patients who are at greatest risk for nodal metastases or those who do have nodal metastases. Most of the evidence is in low-grade endometrial cancers, but evidence in higher-risk histologies, such as serous and clear cell cancers, also exists. Sentinel lymph node [biopsy] can be used in all of those patient populations. The question then becomes how to best treat patients afterward. Right now, we should use the data we have for the treatment of patients with stage IIIc disease.