Rodney Rocconi, MD, discusses the continued exploration of antibody-drug conjugates in patients with ovarian cancer, biomarkers and agents under investigation in the space, and the ongoing research being conducted at the O'Neal Comprehensive Cancer Center. 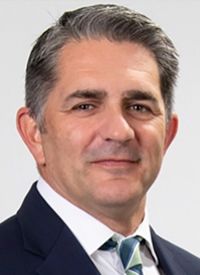 The potential upcoming FDA approval of the antibody drug conjugate (ADC) mirvetuximab soravtansine (IMGN853) could mark another step toward more personalized treatment for patients with ovarian cancer, as the treatment paradigm continues to shift toward increased use of biomarker-driven agents, according to Rodney Rocconi, MD.

“Over the past 6 years, there have been 12 new FDA approvals for ovarian cancer treatment. Looking at the prior 4 decades before that, there were only 10 agents approved. We are not only getting better therapies, but we are also providing it quickly to patients, which can only benefit them,” said Rocconi, a professor of Gynecologic Oncology, the associate director of Gynecologic Oncology, the associate director of Infirmary Cancer Care, and the director of Research at Infirmary Cancer Care at the O'Neal Comprehensive Cancer Center of the University of Alabama at Birmingham (UAB).

In an interview with OncLive®, Rocconi discussed the continued exploration of ADCs in patients with ovarian cancer, potential other biomarkers and agents under investigation in the space, and the ongoing research being conducted at the O'Neal Comprehensive Cancer Center.

OncLive®: How has the use of ADCs in ovarian cancer evolved over time?

Rocconi: ADCs, specifically in ovarian cancer, have been described as the next frontier in personalized medicine. However, [the idea of] ADCs was initially suggested more than 100 years ago, so the concept is not new. The first ADC was used in the late 1950s. Over the past 20 years, we have seen a significant increase in this field with more than 70 ADCs currently in use across all indications in medicine.

Specific to cancer, we are always in search of tumor-specific treatments that only affect cancer [cells] and completely avoid normal cells. ADCs do this through a Trojan horse type of methodology. ADCs target tumor-specific antigens via monoclonal antibodies. There are linkers to hold the toxins to that monoclonal antibody, and they are chemically stable in circulation, so they are not released to normal cells. [The toxins] are only released once they get inside and are internalized within the cancer cells. This decreases adverse effects [AEs] because there are fewer off-target effects or damage to normal cells, but it also increases the efficacy because of the targeting of the toxins.

Most of these ADCs have a bystander effect to where these toxins can leak out and affect other adjacent cancer cells in the region.

What does the current efficacy data say about the ADC mirvetuximab soravtansine?

Mirvetuximab soravtansine [was investigated] in the phase 3 SORAYA trial [NCT04296890] trial as a single agent given to 105 patients with platinum-resistant ovarian cancer that had a high folate receptor alpha [FRα] expression on their tumors. Patients had to be platinum resistant with a progression-free interval of less than 6 months and had to have prior bevacizumab [Avastin]. [Previous use of] a PARP inhibitor was allowed, and the average treatment was 1 to 3 prior lines of chemotherapy.

Efficacy from the trial was robust, as the objective response rate [ORR] was 32.4% for this cohort. That is significant when comparing that data to historical studies of similar populations, where the response rates are around 12%. Also noteworthy is the duration, as the median duration of response [DOR] was 6.9 months. When you consider that every patient recurred withing 6 months on their previous therapy, to have half the patients exceed that prior [DOR] is noteworthy for the activity of [mirvetuximab soravtansine] in patients who had tumors with high FRα expression.

If mirvetuximab soravtansine ultimately gains FDA approval, where do you see it fitting into the treatment landscape?

The data that are most mature are in the platinum-resistant ovarian cancer cohort [with high FRα expression]. That would be the patient population that would be candidates, if approved.

The MIRASOL trial is looking at mirvetuximab soravtansine vs investigator’s choice of chemotherapy, such as paclitaxel, doxorubicin, or topotecan in patients with platinum-resistant ovarian cancer with high FRα tumor expression. We hope to see improved efficacy compared with the physician choice of drugs, plus an improved DOR, which is an important end point for patients.

Ideally, we want to be greedy. We want not only the responses, but we also want fewer AEs and less toxicity. It is hoped with any ADC that targets a specific biomarker that we reduce AEs, and that is the hope from [MIRASOL] once it is completed.

Though there are no head-to-head data, how does the ADC farletuzumab ecteribulin (MORab-202) compare with mirvetuximab soravtansine?

Farletuzumab ecteribulin is another ADC with the same target, FRα. At the 2022 ASCO Annual Meeting, there were promising data presented on an expansion study, [the phase 1 Study 101 trial (NCT03386942)]. There were 2 cohorts [evaluated]: one was a low dose [of farletuzumab ecteribulin] and one was a higher dose. It did demonstrate promising efficacy in [patients with] platinum-resistant ovarian cancer.

The low dose, which was 0.9 mg/kg, had an ORR of 25% [in 24 patients], which again is a significant improvement over historical studies [that have had an ORR] of about 12%. [One patient achieved a] complete response, the partial response [PR] rate was 20.8%, and the stable disease rate was 41.7%. There was a disease control rate of 66.7%, which is noteworthy in the low dose.

Looking at the high dose, 1.2 mg/kg, in 21 patients, the ORR was 52.4%, all of which were PRs, and 43% of patients had stable disease. The disease control rate for that higher dose was 95.2%. I proceed with caution because this was an early trial with a single agent, it was non-comparative, and there was a small number of patients.

However, it was encouraging that with 2 separate agents, both with an ADC methodology, once there is a target, we are seeing efficacy and response rates that we have not seen in a tough-to-treat patient population in platinum-resistant ovarian cancer.

We have talked predominantly about FRα, but there are other targets under investigation. What does the future look like for other ADCs in ovarian cancer?

Numerous other agents that are in various levels of preclinical and early clinical trials [are moving the field forward] as we become more personalized with the specific ovarian cancer treatment that we are giving. Ovarian cancer is no longer a cookie cutter treatment algorithm, where one treatment fits all.

What is most exciting is that we are biomarker driven. That gives us more confidence as providers as we talk about choices with our patients. Instead of saying [to a patient with] recurrent ovarian cancer that the next chemotherapy in line [is the best option] because it works in a larger number of patients, [biomarker-driven treatments allow us to have] a different conversation. We can now tell a patient that on their tumor, there is an expression of a certain marker, and when it is positive, we have significant response rates [with a specific treatment].

Treatment is individualized for patients, and it helps with counseling. What we hope is that by getting more targeted, personalized therapies, there will be better responses, longer lives, more cures, and a better quality of life if we are able to reduce the AEs that we typically see with standard cytotoxic chemotherapy.

Is there any ongoing or upcoming research at the O’Neal Comprehensive Cancer Center that you are excited about?

There are a few trials that we are excited about fit that theme of personalized medicine. A [phase 2] trial [NCT04606914] is also using mirvetuximab soravtansine and carboplatin in the up-front setting for patients with newly diagnosed ovarian cancer and a high FRα expression. This is one trial that we’re excited about to get better responses with that agent in earlier [settings].

Another agent that we have looked at is gemogenovatucel-T [Vigil], an autologously derived immunotherapy. When we take a patient to surgery for ovarian cancer, we harvest part of the tumor to look at the patient’s individual tumor-specific antigens on their cancer and create an immunotherapy treatment specific to that patient.

These are all just snippets of trials that are ongoing, not only at UAB, but across the country. There are many evaluations drilling further into ovarian cancer and getting more specific treatments. That makes it exciting for our patients moving forward.