Patients with mutations in NTRK, RET, MET, HER2, and KRAS G12C have limited therapeutic options, but potentially promising agents are on the horizon. 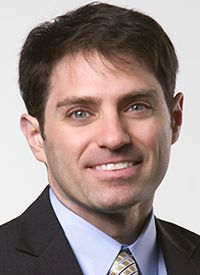 Patients with mutations in NTRK, RET, MET, HER2, and KRAS G12C have limited therapeutic options, but potentially promising agents are on the horizon, said Gerald S. Falchook, MD, MS, adding that these rare oncogeneic drivers in non—small cell lung cancer (NSCLC) are beginning to be better understood.

In a presentation during the 2018 OncLive® State of the Science Summit™ on Advanced Non—Small Cell Lung Cancer, Falchook, director of Drug Development of Sarah Cannon Research Institute at HealthONE, discussed these oncogenic drivers in advanced disease.There are 3 members in this family, Falchook explained—TRKA, TRKB, and TRKC. These are encoded by NTRK1, NTRK2, and NTRK3. TRK causes downstream activation of MAPK, PI3K, and PLCg pathways, which results in cell proliferation and increase cell survival and migration, leading to tumor growth.

“Fusions in NTRK are not common as [up to] 5000 people in the country each year, across all tumor types, have TRK fusion—positive cancers—they are not seen only in lung cancer,” said Falchook. “In lung cancer, [incidence] is in about 3% of patients. But, you will not know if a patient has it unless you are looking for it.”

In addition to NSCLC, NTRK fusions occur in pediatric highgrade glioma, cholangiocarcinoma, and papillary thyroid carcinoma. They are also seen as pathognomonic of rare cancers, such as congenital fibrosarcoma, secretory breast cancer, and mammary analogue secretory carcinoma of the salivary gland.

Larotrectinib has some of the most mature data, Falchook said. In results published in the New England Journal of Medicine, the pan-TRK inhibitor showed an objective response rate of 75% (95% CI, 61%-85%) by independent review and 80% (95% CI, 67%-90%) by investigator assessment in 55 evaluable patients.1 Additionally, there were 7 (13%) complete responses, 34 (62%) partial responses, and 5 (9%) patients with stable disease. At 1 year, 55% of patients remained progression free, and 71% of responses were ongoing.

Three-month patient follow-up data presented at the 2017 ASCO Annual Meeting comprised the first 55 enrolled adult and pediatric patients from a phase I adult trial, the phase II NAVIGATE trial, and the phase I/II SCOUT pediatric trial. Findings showed that 93% of responding patients and 75% of all patients remain on treatment or underwent surgery with curative intent.

“The drug is very well tolerated. Among the treatmentrelated adverse events (AEs), there were no grade 4 events and a handful of grade 3 events,” explained Falchook. “Thirteen percent of patients did require dose reductions; however, even with a reduction, most of them were able to maintain their tumor response. No patients discontinued treatment because of toxicity.”

In May 2018, the FDA granted a priority review to a new drug application for larotrectinib for the treatment of adult and pediatric patients with locally advanced or metastatic solid tumors with an NTRK gene fusion.RET fusions are chromosomal rearrangements that create a fusion between RET and other proteins, activating the RET receptor as well as the MAPK and EGFR pathways. These fusions occur in about 2% of NSCLC cases—usually in patients younger than 60 years old who are never smokers or former light smokers with a poorly differentiated histology and early lymph node metastasis.

“There are a lot RET inhibitors in the clinic now. The first 2, vandetanib and cabozantinib, are not ‘clean’ RET inhibitors. They are multikinase inhibitors with a lot of other targets involved,” explained Falchook. “As time has gone on, more selective inhibitors have been developed.”

LIBRETTO-001 is a phase I study of LOXO-292 in patients with RET-altered cancers (NCT03157128). The potent and highly selective RET inhibitor LOXO-292 induced an overall response rate (ORR) of 77% across RET fusion—positive cancers, according to findings presented at the 2018 ASCO Annual Meeting.3 Responses were observed with RET V804M gatekeeper mutations, which Falchook said are known to cause resistance to multikinase inhibitors. Among patients with NSCLC, the ORR was 77% (95% CI, 58%-90%).

Both duration of response and activity in brain metastases were impressive, Falchook added. The safety profile was favorable as well, with only 2 treatment-related AEs grade 3 or greater, which were alanine aminotransferase and tumor lysis syndrome.

Other toxicities included fatigue (20%), diarrhea (16%), constipation (15%), dry mouth (12%), nausea (12%), and dyspnea (11%). The maximum-tolerated dose was not reached.At least 15 MET inhibitors have entered clinical trials, according to Falchook. This driver has a key role in carcinogenesis and metastasis, which result in cell proliferation, migration, and invasion, and promotes epithelial-mesenchymal transition. MET also stimulates angiogenesis and confers resistance to apoptosis, and overexpression or amplification of MET is associated with a poor prognosis when studied retrospectively.

“There is a lot of heterogeneity with these drugs, but we do not have a winner yet,” Falchook said. “MET, in a lot of ways, illustrates the challenges in drug development, and what happens early on before a drug ever makes it to a phase III trial.”

MET can be activated in several ways, explained Falchook. First, is a mutation that causes downstream activation. Second, it is activated either by overexpression or amplification of MET. The third way is stimulation by hepatocyte growth factor (HGF) through paracrine or autocrine.

Monoclonal antibodies to both HGF and MET have been evaluated to prevent ligand-dependent activation and to induce receptor internalization and degradation. There have also been MET tyrosine kinase inhibitors (TKIs), most of which are ATP-competitive. Some of these are multikinase inhibitors, but there are some selective TKIs.

“One of the challenges is how to define MET amplifications and how to find overexpression. It is a big challenge,” said Falchook. “The pathologists are shaking their heads. We don’t have an answer yet, but we are hoping that in the future we will.”

Fluorescence in-situ hybridization, next-generation sequencing, and immunohistochemistry (IHC) are considered as techniques to help define MET amplification and overexpression. There is a low prevalence of MET alterations, and they are considered a “late event,” meaning that it may not be there at initial diagnosis, Falchook explained. This highlights the need to obtain the testing of new tissue in upfront and later lines of therapy, he added.

Another challenge is how to treat patients with this oncogenic driver. HGF and MET have a role in resistance to targeted therapies, so combinatorial approaches are being evaluated in clinical trials.

Some of the MET/HGF inhibitors in clinical trials are crizotinib (Xalkori), onartuzumab, tivantinib, cabozantinib, rilotumumab, and foretinib. These 6 are the furthest along in clinical development, Falchook noted. Three recent studies have evaluated MET inhibitors in patients with NSCLC.

First, is a phase I trial of crizotinib in patients with MET-amplified NSCLC. The safety and efficacy findings from this trial were presented at the 2018 ASCO Annual Meeting.4 Patients were eligible for evaluation if they had a MET-to-CEP7 ratio of ≥1.8.

“This certainly give us some thought that we need to look closely at the marker that we should be using to identify the right patients to be considered for a MET inhibitor,” Falchook said.

Second, a retrospective analysis presented at the 2017 ASCO Annual Meeting evaluated the impact of MET inhibitors on survival among patients with MET exon 14-mutant NSCLC.5 When a patient has a MET exon 14 skipping mutation, there is loss of binding to c-CBL, which includes decreased ubiquitination, impaired receptor degradation, and overall, results in increased MET signaling, Falchook explained. These factors led investigators to believe that targeting this pathway may be effective.

Among the patients who had a mutation but had no prior therapy with a MET TKI, the median overall survival was 8.1 months (95% CI, 5.3-NR) compared with 24.6 months (95% CI, 21-NR) for those who received a MET TKI. Finally, the phase II VISION trial of tepotinib is ongoing in patients with advanced NSCLC harboring a MET exon 14 skipping mutation (NCT02864992).Overexpression of HER2 is associated with poor prognosis in NSCLC and amplifications and mutations are usually mutually exclusive.

For patients with IHC 2+ HER2 overexpression, the ORR was 0% (95% CI, 0.0-11.9), signifying no response regardless of HER2 amplification status. For patients who had IHC 3+ overexpression, the ORR was 20% (95% CI, 5.7-43.7). The median duration of response in the IHC 3+ group was 7.3 months (95% CI, 2.9-8.3). Although not definitive, these results hint that further investigation may be beneficial, Falchook said.KRAS G12C mutations are seen in about 13% of lung adenocarcinomas. This mutation has a worse prognosis compared with other KRAS mutations, because it results in a defect in the association of GTPase-activating proteins, which reduces the hydrolysis of GTP by KRAS. Additionally, the accumulation of GTP-bound KRAS leads to enhanced proliferation and survival signaling in the tumor cells.

AMG 510 is a first-in-class small molecule inhibitor that specifically and irreversibly inhibits the KRAS G12C-mutant protein. There are no clinical data yet, but a trial is expected to open in August 2018 (NCT03600883).