The FDA has approved isatuximab-irfc (Sarclisa) for use in combination with pomalidomide (Pomalyst) and dexamethasone for the treatment of adult patients with multiple myeloma who have received ≥2 prior therapies, including lenalidomide and a proteasome inhibitor.

The FDA has approved isatuximab-irfc (Sarclisa) for use in combination with pomalidomide (Pomalyst) and dexamethasone for the treatment of adult patients with multiple myeloma who have received ≥2 prior therapies, including lenalidomide and a proteasome inhibitor.1

The approval is based on results of the phase III ICARIA-MM trial, in which adding isatuximab to pomalidomide and low-dose dexamethasone led to a greater than 40% reduction in the risk of disease progression or death compared with pomalidomide and dexamethasone alone in patients with relapsed/refractory multiple myeloma.2 Moreover, the objective response rates (ORRs) were 60.4% and 35.3%, respectively (P <.0001).

"Targeting cells has led to the development of important oncology treatments. While there is no cure for multiple myeloma, Sarclisa is now another CD38-directed treatment option added to the list of FDA-approved treatments of patients with multiple myeloma who have progressive disease after previous therapies," Richard Pazdur, MD, director of the FDA’s Oncology Center of Excellence and acting director of the Office of Oncologic Diseases in the FDA’s Center for Drug Evaluation and Research, stated in a press release. "In the clinical trial, there was a 40% reduction in the risk of disease progression or death with this therapy."

Isatuximab is administered through intravenously infusion, and is a CD38-directed cytolytic antibody that works by helping certain cells in the immune system attack multiple myeloma cancer cells.

The open-label, multicenter phase III ICARIA-MM trial included 307 patients with relapsed/refractory multiple myeloma who received ≥2 prior lines of treatment, including lenalidomide and a proteasome inhibitor.

Patient characteristics were well balanced between the 2 arms. The median patient age was 67 years (range, 36-86) and patients had received a median of 3 (range, 2-11) prior lines of therapy. Overall, 92.5% of patients were lenalidomide refractory, 75.9% were refractory to PI, and 19.5% had high-risk disease cytogenetics.

Isatuximab was administered intravenously (IV) at 10 mg/kg once weekly for 4 weeks followed by bi-weekly for 28-day cycles in combination with standard pomalidomide and dexamethasone for the duration of therapy. There were 154 patients on the isatuximab arm and 153 patients on the control arm of Pd alone. Treatment was continued until disease progression or unacceptable toxicity. The primary endpoint was PFS. Key secondary endpoints included overall response rate (ORR) and OS.

The median time to first response was 35 days with the isatuximab triplet compared to 58 days with Pd alone. The MRD negativity rate was 5.2% versus 0% with isatuximab versus Pd-alone, respectively.

Grade ≥3 treatment-emergent adverse events (TEAEs) occurred in 86.8% of the isatuximab arm compared with 70.5% of the control arm. The rates of serious TEAEs were 61.8% versus 53.7%, respectively.

The rate of TEAE-related discontinuations was 7.2% with the isatuximab triplet compared with 12.8% in the control arm. Deaths related to TEAEs occurred in 7.9% and 9.4% of the 2 arms, respectively. 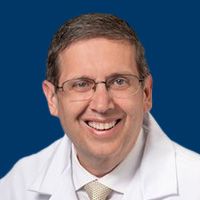