Find Joy in the Job

Michael L. Grossbard, MD, discusses what to look for when choosing a mentor and a fellowship program. 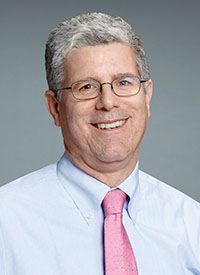 Like many physicians, Michael L. Grossbard, MD, knew he wanted to be a doctor at a young age. Grossbard’s inspiration came from his father, a hematologist/oncologist in northern New Jersey.

“I saw the joy that he got from his job and the relationships that he had with his patients,” he said. “In that way, he was a role model for me in choosing to be a physician.”

Similarly, his interest in working with fellows goes back a long way—at least 30 years to his time on the fellowship selection committees for Dana-Farber Cancer Institute and Massachusetts General Hospital.

Grossbard earned his MD at the Yale School of Medicine and went on to complete a fellowship at Dana-Farber. He became the associate director of the Hematology & Medical Oncology Fellowship Training Program at the NYU Grossman School of Medicine in July after stepping down as director. He still leads many aspects of the training program at Grossman and sits on the ASCO Oncology Training Program Committee.

He always planned to complete a fellowship before moving into academic medicine, even if he wasn’t always sure what direction that career would take. He began treating patients with cancer during his medical residency and became intrigued by the innovative novel therapies of the time.

“I thought that the intensity of experience with patients was great,” he said. “The diseases were interesting, and I thought it was a place where I would be very happy making a career. There was a great opportunity to advance the field academically.”

In this interview with Oncology Fellows, Grossbard talks about what to look for when choosing a mentor and a fellowship program.

What do you feel you gained from your fellowship experience?

I had what I would describe as a wonderful fellowship experience. I had great autonomy to take care of patients and to be intimately involved in making decisions about patients, and several terrific clinical and academic mentors. Some of the people I worked with back then—Robert J. Mayer, MD; George P. Canellos, MD—were giants in the field of clinical oncology.

On the research side of my fellowship, I was able to work with some brilliant people who were at the forefront of developing monoclonal antibody therapies early on in that field. I really treasure that time and worked with some very special people.

How do you help fellows pick a specialty?

We developed a mentoring program about 2 years ago. We start mentorship early in our program; everybody is assigned as a mentor—just a general mentor within the program, not necessarily an academic mentor—to help guide people. Then, as the training program director, I met with all the fellows multiple times during their first year of fellowship to get a sense of what they’re interested in and to tell them areas where I think there are opportunities.

Then I help to guide them to people I think are good mentors. Mentoring is a skill that not everybody has. There are many people who are very well known nationally or internationally, or who are well published, but that doesn’t necessarily make them a good mentor or career developer. I try to direct people toward [mentors] who I know are good at modeling careers.

What should fellows look for in a mentor?

Second, I look at track record, which you can’t always do for junior mentors. But for people who have been around for longer: Have they mentored people? Where have their protégés gone? Who worked for them, either clinically or doing clinical research in the lab? It’s important to look at a mentor’s track record of success as a mentor.

What should trainees look for when choosing a fellowship program?

It’s very important that fellows choose a program that is a good fi t for them, rather than just by name of program or reputation of program. It is increasingly hard, at least in the past 2 years, for people to see a program. ASCO [the American Society of Clinical Oncology] and ASH [American Society of Hematology] both recommend that [all fellowship] interviews will be done by video and not in person, so candidates don’t get to visit the place where they might work. Zoom interviews work to some degree, but there’s a wall [during virtual interviews] that is not there when you’re looking somebody in the eye.

I would encourage people to reach out to colleagues who came before them in a program, or to reach out to current fellows in a program, to really explore carefully and choose the program that is the best fit. If you’re choosing a program because it’s prestigious, but all the fellows are basic scientists, and you don’t want to be a basic scientist, then don’t do that program. It won’t be a good fit. By the same token, don’t take a purely clinical program if you have some inclination to being in the lab.

What do you hope fellows take from your program?