Max S. Topp, MD, highlights the rationale for studying bispecific antibodies in newly diagnosed diffuse large B-cell lymphoma, how the safety profile of glofitamab plus R-CHOP contributes to its potential for outpatient administration, and where future directions with this research may lead. 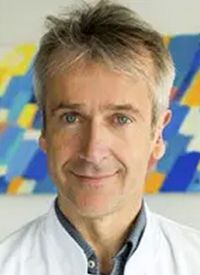 Findings from the safety run-in and expansion stages of the ongoing phase 1 NP40126 study (NCT03467373) showed that patients who received the combination experienced a complete metabolic response rate of 75.5% and an overall response rate (ORR) of 86.8%. Additionally, glofitamab plus R-CHOP was well tolerated, with 23.2% of patients experiencing grade 3 or 4 adverse effects (AEs) related to glofitamab.1

“Overall, the safety profile is favorable, and there were no specific higher-grade toxicities related to glofitamab,” Topp said in an interview with OncLive® at the 2022 ASH Annual Meeting.

In the interview, Topp, head of hematology and a professor of internal medicine, hematology, and oncology at the University Hospital of Wurzburg in Germany, highlighted the rationale for studying bispecific antibodies in newly diagnosed DLBCL, how the combination’s safety profile contributes to its potential for outpatient administration, and where future directions with this research may lead.

OncLive®: What was the goal of this trial investigating glofitamab plus R-CHOP in patients with previously untreated DLBCL?

Topp: Glofitamab has shown remarkable efficacy in patients with relapsed/refractory large cell lymphoma, [eliciting] a complete response rate around 40%. Most of these patients remain in complete remission, even at long-term follow up.

What is the mechanism of action of glofitamab?

Once a T cell engages with the lymphoma cell via this bispecific antibody, it gets activated and starts to produce cytokines and proliferate. It also leads to direct lysis of the aggressive lymphoma cell.

What were the eligibility criteria for this trial?

We looked for patients with an International Prognostic Index [IPI] score of 2 to 5, because for those patients, R-CHOP is insufficient when compared with patients with an IPI score of 0, where there’s a response and a long-time cure rate of close to 95%. We focused on the patient cohorts that clearly have room for improvement.

What key efficacy and safety data have this study revealed?

The 3 topics we [aimed to study] were efficacy, safety, and the degree to which we can give our patients R-CHOP in combination with glofitamab. In over 90% of patients, the dose intensity of R-CHOP could be applied, with most patients receiving cortisone, rituximab, anthracycline, and cyclophosphamide. The only drug where we had a reduced exposure, as expected, was vincristine, because of the development of polyneuropathy, which led to a reduction or even complete abolishment of vincristine in some patients.

AEs occurred in virtually every patient, and serious AEs occurred in 32.1% of the patients, although just 8.9% [of patients had serious AEs] related to glofitamab. [Some of] the most common AEs were neutropenia, thrombocytopenia, and infections. Importantly, the rate of cytokine release syndrome [CRS] was in the single digits. Only 6 patients developed CRS out of 53 patients, 4 with grade 1 and 2 with grade 2 CRS.

The safety profile regarding CRS is favorable and will likely allow this combination to be given during outpatient treatment. We removed the mandatory hospitalization after the safety run-in phase upon seeing the safety profile.

Regarding other AEs of interest, neurotoxicity was seen in many patients, all because of vincristine, and all leading to polyneuropathy. There were 9 serious infections, 8 from COVID-19. We lost 3 patients to COVID-19. Additionally, 1 patient had septic anemia.

What are the next steps for investigating this combination?

Currently, we are recruiting another arm with Pola-R-CHP [polatuzumab vedotin-piiq (Polivy) plus rituximab, cyclophosphamide, doxorubicin, and prednisone], because that is the recommended frontline therapy in many regions of the world. Once we have a readout of that safety profile and efficacy dataset, the next step will be to design a global phase 3 trial answering the question: Can glofitamab be added in a patient population similar to what we have been recruiting, with an IPI score of 2 to 5? We are still discussing whether it can add benefit in that population, and our primary end point [will probably be] overall survival or event-free survival. However, these are questions that we’re still discussing amongst investigators, Roche, and the sponsor.

What is your main message for colleagues?

We can safely add a bispecific antibody targeting lymphoma as a frontline therapy with low toxicity, making this a doable outpatient treatment. [This will hopefully] help many patients in the future.