Abemaciclib (Verzenio) has emerged as a promising agent for patients with hormone receptor-positive, HER2-negative metastatic breast cancer, according to Lowell L. Hart, MD. 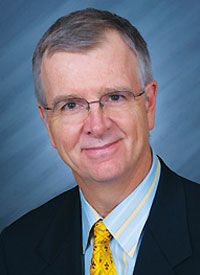 The CDK4/6 inhibitor was approved by the FDA for the frontline treatment of postmenopausal women with HR-positive, HER2-negative advanced or metastatic breast cancer in February 2018. This followed the September 2017 approval of the agent for use in combination with fulvestrant (Faslodex) in women with HR-positive, HER2-negative advanced breast cancer with disease progression following endocrine therapy.

In a presentation during the 17th Annual International Congress on the Future of Breast Cancer® East, Hart, scientific director of Clinical Research at Florida Cancer Specialists, discussed the recent data with abemaciclib in patients with HR-positive, HER2-negative metastatic breast cancer.1

The phase III randomized, double-blind MONARCH 2 trial combined abemaciclib plus fulvestrant in women who recurred or progressed on or after endocrine therapy.

Patients with clinical characteristics such as primary resistance and visceral disease had a less favorable prognosis, and often progressed within 2 years on therapy, Hart added.

"PFS results in subgroups, including those with concerning clinical characteristics, were consistent with the intent-to-treat (ITT) population," Hart explained. "Preplanned subgroup analyses of PFS were performed for stratification factors of disease site, endocrine resistance, and other potential prognostic factors that included measurable diseases at baseline, number of organs involved, age, region, race, progesterone receptor status, and an ECOG [performance] score."

The MONARCH 2 results led to the September 2018 FDA approval of the agent in combination with fulvestrant in women with HR-positive, HER2-negative advanced disease with progression following endocrine therapy.

Another use for CDK4/6 inhibitors is in the frontline setting along with an aromatase inhibitor (AI), Hart said.

"In general, most of the gurus in the field that I have talked to feel that an AI and a CDK4/6 inhibitor should be your default," said Hart. "As a default, it is hard to argue with the data."

MONARCH 3 was a phase III, randomized, double-blind, placebo-controlled trial that evaluated abemaciclib plus an AI as initial endocrine-based therapy. This study included patients with HR-positive, HER2-negative locoregionally recurrent or metastatic breast cancer. The primary endpoint of this trial was PFS, with secondary endpoints of OS, ORR, and DoR.

The PFS in both the postmenopausal subgroups of patients with liver metastases and treatment-free interval <36 months were consistent with the ITT population, according to Hart.

MONARCH 1 was the phase II, single-arm trial that led to the single-agent FDA approval in HR-positive, HER2-negative metastatic breast cancer. The study included 132 patients who progressed during or after endocrine therapy and chemotherapy. Patients received 200 mg of abemaciclib orally every 12 hours on a continuous schedule until progression or unacceptable toxicity.

Abemaciclib is the only CDK4/6 inhibitor approved across this population in combination with fulvestrant or an AI and as a single agent, Hart noted.The majority of patients on abemaciclib will experience diarrhea, and the onset of the adverse event (AE) is quick, with a median duration of 11 days.

"The side effects are a little bit different, and those who use it are probably aware that patients are going to get some diarrhea at the start—about 80%," said Hart. "In our practice, we give them all Imodium. Every patient who is on this drug should have an antidiarrheal available."

Diarrhea is often associated with dehydration and infection, so the AE management of a patient on abemaciclib is important. Hart advised to start patients on antidiarrheal therapy at the first sign of loose stools and to increase oral fluids. Patients should notify their primary care physician for next steps, as well as follow-up, he added.

The management recommendation for neutropenia as a result of abemaciclib is to monitor complete blood counts prior to the start of therapy every 2 weeks for 2 months, and then monthly for the next 2 months. For patients who develop grade 3/4 AEs, dosage may be reduced, interrupted, or delayed. Additionally, patients should report fevers to their primary care physician, Hart said.

"As with many of these drugs, you have to look out for CYP3A inhibitors," said Hart. "Strong CYP3A inhibitors increase the exposure of abemaciclib plus its active metabolites to a clinically meaningful extent and may lead to increased toxicity."

Safety information also states that a dose reduction to once daily is necessary in the case of severe hepatic impairment (Child-Pugh Class C).

"Because it is less suppressive of neutrophil count, you can take it continuously. You continuously inhibit the cell cycle progression; you’re not taking a week off," Hart explained. “In vitro studies have shown that by inhibiting that Rb [retinoblastoma] pathway, that can lead to senescence and apoptosis of cancer cell."

Hart concluded that there is good evidence that abemaciclib crosses the blood-brain barrier, although the significance of that in patients is unknown.