Constantine S. Tam, MD, discusses the key findings of the phase 3 SYMPATICO study and where this combination might fit best into a sequence of therapies.

The combination of ibrutinib (Imbruvica) plus venetoclax (Venclexta) demonstrated encouraging clinical activity in patients with relapsed/refractory mantle cell lymphoma (MCL), according to safety run-in (SRI) results from the phase 3 SYMPATICO trial (NCT03112174) that were presented during the 2020 ASH Annual Meeting and Exposition.

Investigators will next explore the combination in the ongoing, randomized phase of the SYMPATICO study, in which ibrutinib/venetoclax will be compared with ibrutinib/placebo in this patient population. A single-arm, open-label cohort is also ongoing in treatment-naïve patients, including those with TP53 mutations.

“[In this study,] we show that the combination was safe when started simultaneously, and that the PFS is quite durable,” said lead study author Constantine S. Tam, MD. “That gives impetus to the completion the randomized a portion, which will hopefully show that this combination is better than ibrutinib [alone].”

In an interview with OncLive, Tam, director of Hematology at St. Vincent's Hospital, Clinical Lead for CLL and Low-Grade Lymphoma at Peter MacCallum Cancer Centre/Royal Melbourne Hospital, and a professor of hematology at the University of Melbourne, Australia, discussed the key findings of the phase 3 SYMPATICO study and where this combination might fit best into a sequence of therapies.

OncLive: In the SYMPATICO study, what was the rationale for combining ibrutinib plus venetoclax in MCL?

Tam: We know that ibrutinib and venetoclax are both active as monotherapy in patients with MCL, and we have previously shown in a phase 2 study that the combination of the 2 drugs, at full dose, is active and provides a high CR rate and a high MRD clearance rate. SYMPATICO is an international, phase 3 study set up to determine whether the combination of ibrutinib plus venetoclax is better than ibrutinib by itself in relapsed/refractory MCL.

The abstract [presented as the 2020 ASH Annual Meeting and Exposition] is what we call the SRI portion, where patients are treated on a non-randomized basis. The purpose of the SRI schedule is to demonstrate that the simultaneous start of ibrutinib and venetoclax from day 1 is safe. In our previous phase 2 study, we gave patients 1 month of ibrutinib before we started the combination. The rationale for giving the combination, right from day 1, is that it may minimize the risk of MCL resistance.

For the [SRI phase], we looked at establishing whether the combination is safe when [both drugs are] given simultaneously. There are [also] secondary end points, including remission rates, MRD clearance rates, and PFS.

What did the findings presented at the 2020 ASH Annual Meeting and Exposition show?

We treated 21 patients in the SRI cohort. Of those 21 patients, 15 were high-risk for TLS by virtue of a large tumor burden, or impaired renal function, [while] 6 [patients] were low-risk for TLS. Essentially, the simultaneous start of the 2 drugs is feasible and is associated with an acceptable rate of toxicity. Importantly, of all the patients—including the 15 high-risk patients—there was only one episode of TLS.

Based on those data, we concluded that the simultaneous start of ibrutinib and venetoclax is feasible, which leads to the randomized portion where patients receive the 2 drugs simultaneously.

The other important finding was that we looked at the response rates in this group of patients, and pleasingly, there was no difference between high- and low-risk patients. Across all patients, we have an ORR of 81% and a CR rate of 62%. Individually, these drugs give a CR rate of about 20%. [These findings] suggest that the combination is quite active. In addition, there were 11 patients with detectable MRD at baseline, and all of those patients achieved MRD clearance.

At 18 months, the PFS rate was 75% which, once again, is higher than one would expect for ibrutinib or venetoclax monotherapy.

Was there anything about this study that surprised you?

Only in a nice way. As I mentioned, we had 15 patients who are at high-risk for TLS, and because the combination is so potent, a theoretical concern was that [you will get] a lot of TLS when you start both drugs on day 1. It was pleasantly surprising that only 1 patient had laboratory TLS.

Where do you think this combination might fit into the sequence of therapy?

We're hoping that this study will show that the ideal second-line therapy should be a combination of ibrutinib or venetoclax after relapse. Also, for a special group of patients who have a TP53 mutation, where we know that chemotherapy outcomes are poor, this is potentially a combination that may be very active in the frontline setting. In fact, this study has a randomized arm testing this secondary hypothesis. It is using the combination in patients who are either unfit for chemotherapy, or who are not suitable chemotherapy by virtue of their mutations. This is a third arm of the study that has not been reported to date.

Dr. Till on the Potential to Utilize CAR T-Cell Therapy Earlier in MCL 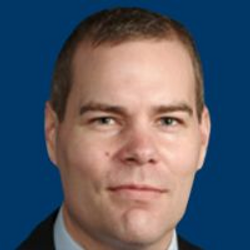