Roy S. Herbst, MD, PhD, helped usher in the age of targeted therapy and immunotherapy in lung cancer, turning an almost hopeless disease into a condition that can be treated and even cured. 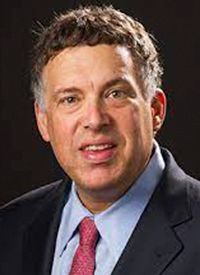 From a young age, Roy S. Herbst, MD, PhD, was fascinated by physiology. He was an avid learner and successful student in many academic subjects, but he had a singular passion for science that grew stronger throughout his childhood and young adult life.

Discovering the intricacies of the human body shaped his educational trajectory. As a high school student in New Rochelle, New York, he was selected to participate in a science honors program at Columbia University. On Saturday mornings, Herbst and his classmates traveled to the Columbia campus, and sometimes, in Herbst’s case, to Columbia University Vagelos College of Physicians and Surgeons.

“I was very fortunate...So many people would say, ‘Why would someone spend their Saturday morning in class?’ But it was an enrichment class,” Herbst reflected. In this program, Herbst and his peers studied in a range of scientific disciplines, from endocrinology to the histories of medicine and physics. These classes were “early experiences that got me very interested in medicine and physiology,” Herbst said.

When it came time to choose a college, Herbst was drawn to study at Yale University because of its established connections in the medical field. As an undergrad, he made every effort to get involved in scientific opportunities, recalling “nervously” venturing to the School of Medicine, about 4 blocks from the main campus, to interview for a chance to work with animal models or gene expression.

It was also at Yale that Herbst first combined medicine with his passion for volunteer work, something he’d already pursued in his community while growing up.

Herbst became the head of the Emergency Room Team and the Patient Volunteer Corps at Yale, positions that gave him hands-on experience with prioritizing patient needs.

Recognizing the multifaceted lives of patients and giving back is “very much part of cancer research now,” he noted. His early experiences with science rooted in community outreach sharpened his focus, propelling him to use the resources at his disposal to continue making cancer care patient centered and directly reflective of real community needs.

Herbst attributes many of his opportunities and much of his success to his “critical” mentors, who helped him streamline his motivations and ultimately carve a path in lung cancer. They taught him the value of combining hypothesis-based research with compassionate, patient-focused care, a philosophy that forms the foundation for his work to this day.

“The thing I’m most proud of is the dozens of people I’ve worked with...all the people who have developed treatments in all cancer areas, but specifically lung cancer...who are now leaders in the field,” Herbst said.

As a college student, Herbst worked in the laboratory of his thesis advisor, David C. Ward, PhD. At the time, Ward, a molecular biologist, was developing in situ hybridization to measure gene expression. The work gave Herbst firsthand experience with developmental mutations and formed the backbone for his scientific understanding of cancer.

Ward encouraged his protégé to continue his education at what is now Weill Cornell Medicine.

The head of Herbst’s program there was Ralph L. Nachman, MD, a well-known hematologist who would later become the chair of medicine at Cornell. Making hospital rounds with Nachman introduced Herbst to the cancer treatment environment before he ever even started on the medical school curriculum. During these rounds, Herbst found he was “very enamored by [the challenge of] cancer,” especially the real-life cases of lymphoma that he saw.

After earning his medical degree, Herbst pursued a medical oncology fellowship at Dana-Farber Cancer Institute. He wound up working in lung cancer mostly by default. “I pretty much got the job at Dana-Farber because no one else wanted it, it was so grim,” he remembered.

However, as he advanced through his fellowship, Herbst saw progress unfold. He eventually realized that he and his colleagues were making a difference for their patients. That knowledge still motivates him today.

Like so many young physicians who’ve worked at Dana-Farber, Herbst was influenced by the institution’s legendary fellowship director, Robert J. Mayer, MD, the 2015 Giants of Cancer Care® award winner for gastrointestinal cancers. He credits Mayer with sparking his interest in translational research. Other mentors who helped him grow in this specialty included Arthur T. Skarin, MD, a prominent lung cancer specialist, and the legendary Emil “Tom” Frei III, MD.

After he’d spent a lifetime on the East Coast, The University of Texas MD Anderson Cancer Center recruited the young investigator in 1997. There, he worked with 2 more Giants of Cancer Care® award winners, Waun Ki Hong, MD, and John Mendelsohn, MD. Hong and Mendelsohn both encouraged Herbst to get involved in the earliest studies of inhibitors of epidermal growth factor (EGFR). Herbst found himself present for the birth of targeted therapy for lung cancer.

“I was probably one of the very first handful of people who gave EGFR inhibitors to a patient and saw tumors melt away,” said Herbst, a memory which he claims as one of the most fascinating achievements of his career.

Herbst went on to become a pioneer of EGFR-targeted therapies. He was instrumental in developing drugs such as gefitinib (Iressa), which showed remarkable first-line efficacy at the forefront of EGFR mutated non–small cell lung cancer (NSCLC) treatment. He also helped launch the investigations of erlotinib (Tarceva) and cetuximab (Erbitux), therapies that helped signal “the dawn of targeted therapy for lung cancer in the adjuvant metastatic setting.” Thanks to Herbst’s innovations, EGFR is now widely recognized as a reliable predictive biomarker in lung cancer treatment.

Just as bodies are complex networks of interconnected systems, Herbst’s career journey has led him down different pathways that have ultimately converged at the position he currently holds as the director of Yale Cancer Center and Smilow Cancer Hospital Center for Thoracic Cancers.

However, this position, constantly in flux with the evolving scientific state of lung cancer, also reminds him to stay humble. “I’m still learning, 40 years [later],” he emphasized. Just as when he began his Yale career as a student, he still holds himself to strict standards of open-mindedness and a willingness to change and grow with the latest facts and resources. He cites that attitude as the most direct path toward constantly improving lung cancer treatment.

Herbst takes even greater pride in the vast network of connections at his disposal at Yale. “It’s pretty amazing to be here, having been a student, and now back as one of the senior faculty, and having the opportunity to use the resources and the teams and the people to combat cancer,” he said.

Herbst takes every chance he gets to use his leadership position to connect with people, spending his days meeting with other department chiefs, collaborating with the dean, and influencing students and fellows. He remembers the gratitude and amazement he felt as a student at institutions that afforded him the chance to use a wealth of knowledge, resources, and mentors.

“I was going to be able to help people with their disease with all this science,” he said. “When I went into the field 30 years ago, for advanced metastatic disease, all we had was chemotherapy.”

Herbst’s contributions to multimodality therapies, including “the immunotherapy revolution,” have continued to carve a path toward improved lung cancer treatment. He and his colleagues were some of the first clinical investigators to describe PD-1 and PD-L1 adaptive immune response in early trials. From there, Herbst was a lead investigator in the KEYNOTE 010 trial, which contributed to FDA approval of pembrolizumab (Keytruda) in PD-L1–positive NSCLC. It marked the first approval for a checkpoint inhibitor in frontline lung cancer treatment.

He is currently a study chair for the Lung Cancer Master Protocol (Lung-MAP), an umbrella trial exploring targeted therapies in NSCLC at hundreds of sites across the United States. Since its inception, Lung-MAP has expanded to evaluate 12 novel therapies in patients with all types of NSCLC. The trial is a remarkable example of how vast the lung cancer treatment paradigm has become. A major motivating factor for Herbst as he heads this umbrella trial is "the idea that we can bring drugs to patients...in a very targeted and focused way."

Herbst’s passion for mentorship and accessible cancer care extends to his work with the Bristol Myers Squibb Foundation and the American Association for Cancer Research’s Robert A. Winn Diversity in Clinical Trials Award Program. Although the lung cancer field has seen remarkable advances, Herbst knows they are not true victories unless everyone can participate in and benefit from the research and treatments. He plans to increase the program’s outreach efforts to make cancer care more inclusive and medical institutions more representative of the communities they serve.

Herbst met the woman who would become his wife shortly after moving to Texas. They married in 1999 and had a daughter a few years later. All 3 were happy to stay in Houston, where the warm climate appealed to his wife’s South African roots.

When Herbst’s career brought him back to Connecticut to become the chief of oncology at Yale Cancer Center and a professor of medicine at Yale University, his wife and daughter were initially wary. Trading year-round warm weather for frigid New Haven winters seemed like a bad exchange.

Now, however, the whole family enjoys the charm their current hometown has to offer. Herbst spends his days at Yale, his wife is in practice as a psychologist, and their daughter is in her final years of high school. Together with their Goldendoodle, they actively enjoy the “small but strong” community they’ve found in New Haven, a nice college town with great pizza, abundant arts and entertainment, and, of course, an exceptional university.

Of all the places he has ventured over the course of his career, New Haven always rises to the top. “It was a small amount of time, but those college years are very formative....I would say right now my home really is in New Haven, given that I had such a wonderful time as a college student here,” he said. “I love the university, the intellectual environment, the friends, and the different things to do...and I’ve had great success in my research while here.”

Herbst is proud to have accomplished all that he has in lung cancer, both in the research realm and in the clinic. He balances his research endeavors with a true patient-focused practice and is acutely aware that his influence in the lung cancer community stretches far and wide.

“I’ve really enjoyed working in this field. It’s been great,” he said. “I’ve seen the field of lung cancer going incredibly well with the progress we’ve made over the years.”