Mitchel Hoffman, MD, explains the use of surgery and neoadjuvant chemotherapy in ovarian cancer. 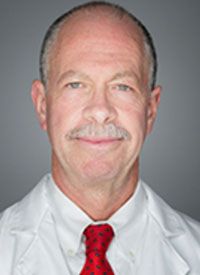 Neoadjuvant chemotherapy could potentially become the standard-of-care regimen for patients with advanced ovarian cancer, but more research is necessary, according to Mitchel Hoffman, MD.

“With advanced disease, neoadjuvant chemotherapy with the surgery followed by more chemotherapy is evolving into a standard-of-care approach. Sometimes, if a patient has a complete response clinically, then they can have the surgery laparoscopically,” said Hoffman, a gynecologic oncologist at Moffitt Cancer Center.

In an interview during the 2019 OncLive® State of the Science Summit™ on Ovarian Cancer, Hoffman explained the use of surgery and neoadjuvant chemotherapy in ovarian cancer.

OncLive: How has the goal of surgery in ovarian cancer evolved?

Hoffman: Ovarian cancer surgery has a 40-year history. [Ovarian cancer is] a disease that extends widely through the belly cavity. When you open a patient with the typical advanced ovarian cancer, it doesn't really look like a surgical disease. It's spread [throughout the abdomen], not like a lump in the breast that you can cut out. It's like somebody threw glue, marbles, and golf balls into the belly. Where do you even start?

Some brave surgeons started to take pieces of [the cancer] out. After, they would use chemotherapy on those patients. [Surgeons] found that if they were able to remove a fair amount of that disease and then give chemotherapy, patients seemed to [have better outcomes].

Over the past 20 years, because that evidence has accumulated, surgery has gotten more and more impressive. It started out as a very extensive pelvic operation. Surgeons started to notice that they were leaving [cancer] in the upper abdomen because the disease extends all over the place. Surgeons started to extend the surgery to wherever the cancer went, including removing [cancer] around the diaphragm and the liver. Very extensive surgeries were being done and better outcomes were reported.

Over the past 15 years, we realized that, if we gave [patients] chemotherapy before we operated, it was a little easier to do the surgery and you had a better chance of getting all [the cancer] out—maybe with less extensive surgery. A few phase III trials done since 2010 have shown that this looks like a very good approach. These trials compared patients who appeared to be appropriate for either upfront surgery or neoadjuvant chemotherapy followed by surgery. Patients were randomized between the two approaches; results showed that the approach of chemotherapy first was noninferior to [upfront surgery] and was associated with a lower risk of complications.

As a result, some national guidelines were created to say that neoadjuvant chemotherapy is a good approach. This led to working on better patient selection. Some patients aren't good candidates for surgery anyway and so they get chemotherapy, while others can be operated on upfront.

Could you expand on the eligibility criteria for these two approaches?

Some of these patients come in and they're obviously not in good condition. In that case, we know right away that this is not a patient worth taking to the operating room. The cancer extends through the belly cavity and it takes a toll on patients. Their intestinal function starts to decline, they can't eat, and they become malnourished and dehydrated. Some patients have deep vein thrombosis, pulmonary embolism, or a variety of other symptoms that happen to them as the result of this advanced disease. Those patients have deteriorated to the point where we say this patient isn't ready for the operating room and we'll calm the disease down with chemotherapy first.

Some patients are selected for surgery by doing CT scans and biopsies. Sometimes, patients undergo laparoscopy surgery to have a closer look. If everything tells us that this patient is fit for surgery—the cancer looks pretty localized and we're going to do a reasonable job of getting it out&mdash;then we're going to select that patient to have upfront surgery.

What ongoing research or debates may add to these questions on upfront surgery and neoadjuvant chemotherapy?

However, there is still criticism of these trials. The overall survival in some of them hasn't been as good as [what was] reported [in others], and the operative time was shorter. Those studies were picked apart in that way. I don't think anybody means these studies are not valid. Those are just criticisms. There's some validity to what's being said; these are phase III, well-done trials that overall provide good data. However, we should still listen to those criticisms and reevaluate the selection process of patients.

The TRUST trial (NCT02828618) is trying to address the surgical quality. They've laid out rules for who can [perform] the surgery. How many operations have they done? How is their optimal debulking rate? When you look at the list of institutions [included on the list], they're all excellent, but there are a lot of excellent institutions that aren't included. The systemic therapy they're using in that trial is different than other studies. [However], I don't think [this trial] is going to settle the controversy.

Ovarian cancer is not a surgical disease for the most part. There are patients with stage I disease, but it's usually not a disease that you can handle surgically. Surgery is a complimentary part of the process. The success or failure of ovarian cancer pretty much always relies on the effect of the systemic treatment. I don't think surgery is going to be part of the answer for ovarian cancer. It's going to rely on things like prevention, perhaps early detection, and better systemic therapies.