Key Trials Showcase the Utility of Neratinib in HER2+ Breast Cancer

Michel Velez, MD, provides perspective on the clinical experience with neratinib in patients with early-stage HER2-positive breast cancer as well as promising data that may lead to an indication in the metastatic setting.

Given the number of prophylactic interventions that are now available, counseling patients with early-stage HER2-positive breast cancer on the benefit of extended adjuvant therapy with neratinib (Nerlynx) or considering its use in those with central nervous system metastases could be beneficial, said Michel Velez, MD.

“We know that neratinib has value in the extended adjuvant setting,” said Velez. “Now we know there is activity in the metastatic setting—especially in patients who have been previously treated with trastuzumab (Herceptin), pertuzumab (Perjeta), and ado-trastuzumab emtansine (T-DM1; Kadcyla).”

In an interview with OncLive, Velez, a medical oncologist at Holy Cross Hospital, provided perspective on the clinical experience with neratinib in patients with early-stage HER2-positive breast cancer as well as promising data that may lead to an indication in the metastatic setting.

OncLive: Where does neratinib fit into the paradigm of HER2-positive breast cancer?

Velez: Neratinib is a highly potent anti-HER2 therapy; it's a pan-HER inhibitor. The agent been FDA approved for a couple of years in the extended adjuvant treatment of HER2-positive breast cancer. These days, the data are stronger in the estrogen receptor (ER)—positive, HER2-positive patient population. However, we believe there is some signal of activity in the ER-negative, HER2-positive population as well, especially if you start those patients early on. Currently, the agent is indicated after 1 year of trastuzumab-based therapy in the extended adjuvant setting.

Could you discuss the efficacy we have seen with neratinib?

I usually discuss neratinib with all my patients. The biggest [magnitude of benefit] we've seen with neratinib is in the ER-positive, HER2-positive patient population, especially those with node-positive disease. The hazard ratios there are impressive. [The agent is also beneficial] in patients with larger tumors. Patients with 4 or more positive lymph nodes have a hazard ratio less than 0.5. We have to consider these patients [when thinking about neratinib]. Young patients seem to benefit more.

[We shouldn’t discount] neratinib’s value in patients with ER-negative, HER2-positive disease, especially if they’re treated early on. If they have enough disease that would put them at high risk, you should consider using neratinib within the first 6 months of completing adjuvant therapy with trastuzumab.

What specific trials have demonstrated the benefit of neratinib?

The pivotal study was the phase III ExteNET trial. Now, we have definitive 2- and 5-year data on invasive disease-free survival in which the agent is showing a benefit in the intent-to-treat population. Data from the 5-year analysis showed that the benefit was maintained.

More recently, we have data from the phase III NALA trial in the metastatic setting. Here, we also saw the benefit of neratinib versus the combination of capecitabine and lapatinib (Tykerb), which is a regimen that has been around for some time. We know neratinib has significant central nervous system (CNS) activity, so we have trials that have looked at [neratinib] with overall response rates that are usually beyond 40%. That’s not a trivial number. The third-line space is often an orphan space where we don't know what to do after patients progress after T-DM1. We hope for an endorsement from the FDA soon and maybe from the EMA in Europe.

We should consider [neratinib] in patients with CNS disease; it's endorsed by the National Comprehensive Cancer Network (NCCN) guidelines. However, it can be difficult to find because it's under the CNS portion of the NCCN guidelines and not so much under the breast portion of the guidelines. There are enough data to tell us that there is activity [in this space]. Ultimately, you have to look at the subgroup analysis and see where your patients fit in. In the metastatic setting, if you have patients with CNS disease, you already have access to neratinib. Hopefully, we will get more access after the regulatory reviews.

How does neratinib differ from some of the other anti-HER2 drugs on the market?

Neratinib is a small molecule which allows for more CNS penetration. It's an irreversible pan-HER inhibitor, so it not only targets HER2, but also HER1 and HER4; that may help in overcoming some pathways of resistance. The agent seems to work well with anti-estrogen therapy. Neratinib may have a complimentary effect with anti-estrogen therapy, based on the signal we saw in the ExteNET trial. The fact that neratinib is an oral small molecule makes it very appealing.

Some of the other drugs that are highly effective such as trastuzumab, T-DM1, and pertuzumab are larger molecules. These agents haven't proven their efficacy in the CNS; that's the main difference. Neratinib differs from trastuzumab; we have trials of extended trastuzumab in the adjuvant setting for 2 years that showed no efficacy. We have trials of other TKIs as well, such as lapatinib. However, adjuvant lapatinib didn't seem to have any effect. Neratinib, on the other hand, has proven its value and shown an absolute benefit in the extended adjuvant setting.

How does the phase II CONTROL data compare with the data from the ExteNET trial?

The incidence of grade 3 diarrhea was about 40% in the ExteNET trial. The trial did not include prophylaxis, so the diarrhea was managed reactively and not proactively. The purpose of the CONTROL trial was to figure out a strategy to control and decrease the severity of diarrhea. Different arms have been tested. There is the loperamide-only arm, which shows some efficacy. There was a combination of budesonide and colestipol, which showed an even greater improvement in controlling grade 3 diarrhea; there was a reduction of over 50%.

Now, investigators are looking at an escalation arm which looks the most promising. We are familiar with the concept of escalation with other drugs. With some of the TKIs in renal cell carcinoma and even lung cancer, we find that they have to escalate the drug. It's going to prove to be a valuable strategy with neratinib as well. In my practice, the aggressive use of loperamide has worked well, but I know I have other options. The escalation option may be one that will allow us to be comfortable and take away those first few weeks of difficulty.

Is there a preferred intervention strategy?

My preferred strategy is to be aggressive with loperamide. I tell my patients to start taking loperamide with the first dose of neratinib, and that is in line with the [protocol] from the CONTROL trial in which patients take 4 mg of loperamide 3 times daily for the first 2 weeks and then twice daily for the remaining 6 weeks until they complete 2 months of treatment.

If that approach fails to control their diarrhea, I tell them to escalate and take 2 tablets every 4 hours while they're awake until they have no bowel movement for about 24 hours. Don't be afraid of increasing the dose of loperamide up to every 4 hours, and then wait until the patient has not had any bowel movement for about 24 hours. At that time, they can stop loperamide and resume the medication. Usually that approach works well.

I have not had to use colestipol or budesonide in my practice. If patients still have some issues, I tell them to hold the medication and then I tend to resume the dose at the same level.

What has the overall clinical experience been with managing diarrhea?

It's been something that I can predict; diarrhea is predictable. Diarrhea tends to happen in the first few days after patients start neratinib; it's also usually confined to the first month of treatment. As soon as patients get through the first month, they seldomly have any other complaints and eventually go to an every-3-month schedule.

I usually don't hear many complaints once they move into that every-3-month schedule. As long as I can manage diarrhea within the first 4 weeks, that is usually successful and patients go on to complete the whole 1 year of treatment. It's just a matter of knowing that you can predict it; diarrhea is going to happen early. Know that if you're aggressive, you can overcome it. Then, give your patient the confidence that they're going to be able to get through the first few weeks, after which it is going to be much easier. We're going to have to be the coaches who get our patients through the first 4 weeks of treatment.

What has the patient experience been with this agent?

As long as patients know what to expect, it'll be an easier experience for them. I tell them that we need to be aggressive from the start, that we cannot let our guard down. Patients should know that if it is to happen, all we have to do is stop the drug, let them recover, and then re-challenge them later. I have had very few patients discontinue neratinib because of the diarrhea. Many patients are able to complete the 12 months of therapy without any serious adverse events (AEs).

What other AEs should your colleagues be aware of?

I've had some patients who have experienced some mild to moderate nausea. I have seen gastrointestinal AEs, but for the most part. I have not seen a lot of fatigue [with neratinib]. The AEs are usually either nausea or diarrhea. [For nausea] I would give what you would normally give whether it's ondansetron, prochlorperazine, or metoclopramide—anything that works for the patient. Then with the diarrhea, be aggressive with loperamide, and if that doesn't work you can always escalate with your anti-diarrheal prophylaxis or treatment.

What are the next steps that should be taken with neratinib?

We should wait for the review of the data in the metastatic setting. Hopefully, we’ll have that approval for our patients in the near future. Also, we’ll have to wait for that last escalation cohort of the CONTROL trial. It's a nice concept, and it will give comfort to clinicians who are not comfortable using neratinib. It seems like the incidence of diarrhea is going to be very little. It's important for us to discuss neratinib with all of our patients. Patients with breast cancer need to know what their options are; they are the ones who should decide whether they think neratinib is something they're willing to take—whether the benefit is 4%, 5%, or more than that.

Based on the data from ExteNET and the subgroup analysis, there are definitely some patients who will benefit from neratinib the most. We now have data from the phase III KATHERINE trial in the adjuvant setting with ado-trastuzumab emtansine (T-DM1; Kadcyla). Patients with residual disease are at very high risk; they have residual disease after highly effective therapy for 4.5 to 6 months. Those patients, even after T-DM1, remain at risk. Their risk doesn't go down to 0 after treatment with adjuvant T-DM1. You have to evaluate patients on a case-by-case basis and decide which of those patients with residual disease are high risk.

Although we don’t have any data after adjuvant T-DM1, you should still consider neratinib. Many of these patients are young and had a lot of disease at presentation. If they have residual disease following highly effective therapy, you cannot assume the risk of recurrence is 0, because it's not. 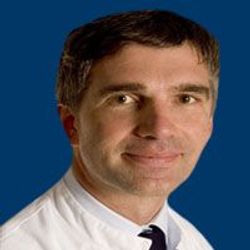 Marvels in Medicine: Dr. Slamon on a Career of Drug Development in Oncology

Dr. Meisel on Sequencing Considerations in First- and Second-Line HER2+ Breast Cancer
x