Maintenance therapy with carfilzomib, lenalidomide, and dexamethasone led to a significant improvement in progression-free survival vs lenalidomide alone in patients with newly diagnosed multiple myeloma who underwent autologous stem cell transplant after induction therapy, according to an unplanned interim analysis of the phase 3 ATLAS trial. 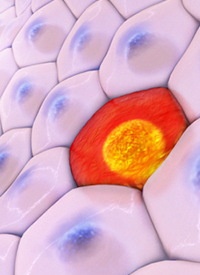 Maintenance therapy with carfilzomib (Kyprolis), lenalidomide (Revlimid), and dexamethasone (KRd) led to a significant improvement in progression-free survival (PFS) vs lenalidomide alone in patients with newly diagnosed multiple myeloma who underwent autologous stem cell transplant (ASCT) after induction therapy, according to findings from an unplanned interim analysis of the phase 3 ATLAS trial (NCT02659293). However, treatment with the KRd combination made no difference in overall survival (OS).

“In this interim analysis of the ATLAS study, we showed that minimal residual disease [MRD]–directed and risk-adapted treatment with carfilzomib, lenalidomide, and dexamethasone for 8 to 36 cycles might offer a PFS benefit compared with lenalidomide alone as maintenance therapy after ASCT in patients with newly diagnosed multiple myeloma,” the study authors wrote in the publication.

To be eligible for enrollment in this trial, patients at least 18 years of age had to have newly diagnosed multiple myeloma and completed any type of induction followed by single ASCT. Patients had to have stable disease or better and received transplant within 100 days, initiated induction 12 months before enrollment, had an ECOG performance status of 0 or 1, an absolute neutrophil count of at least 1 × 10⁹ cells/L, a platelet count of at least 70 × 10⁹ platelets/L, adequate liver function, and creatinine clearance of at least 50 mL/min or serum creatinine lower than 2 mg/dL.

Patients in the lenalidomide arm received 10 mg of oral lenalidomide for the first 3 cycles and then at the best tolerated dose (≤15 mg for 28 days in 28-day cycles until disease progression or unacceptable toxicity). After 36 cycles, patients in both treatment arms received lenalidomide maintenance.

To minimize the risk of financial and treatment-related toxicity, patients in the KRd arm without detectable MRD after cycle 6 and standard-risk cytogenetics proceeded to lenalidomide maintenance as of cycle nine.

Patients discontinued therapy if they had disease progression, unacceptable toxicity, were noncompliant with the study protocol, withdrew consent, or required alternative therapy.

All patients received prophylactic herpes zoster and venous thromboembolism for the duration of treatment. Other concomitant medications were permitted at the investigator’s discretion.

The unplanned interim analysis was triggered because 59 (61%) of the anticipated 96 events occurred for the primary analysis. Patients will continue to undergo follow-up until the primary analysis, at which point the last enrolled patient will reach 4 years of follow-up.

Thirty-five patients in the ITT population of the KRd cohort had standard-risk disease and MRD negativity and were switched to lenalidomide maintenance after cycle 8.