A girl who grew up in a small South Dakota town, Julie M. Vose, MD, MBA, grew into a dynamo who revolutionized lymphoma treatment and led the most prominent oncology organization in the world. 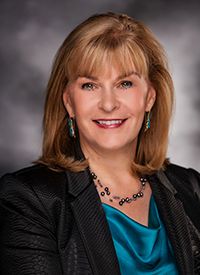 With a pathologist for a father and a nurse for a mother, it is safe to say that Julie M. Vose, MD, MBA, was interested in the sciences, and medicine in particular, at a young age.

“I grew up in a medical family and started down that path pretty early in my life,” Vose remembered. “I worked in my dad’s lab when I was in high school, and later in college, and got interested in laboratory medicine and cancer. And I was going to be a pathologist, but my father told me not to do that. So, I got interested in oncology and eventually decided to go into that instead.”

Vose grew up in Mitchell, South Dakota, a town of about 15,000 people, west of Sioux Falls. She enjoyed the camaraderie of the small-town atmosphere and cherished knowing most of the neighboring families and their children.

After high school, Vose chose to stay close to home and attend the nearby South Dakota State University (SDSU) in Brookings. Majoring in medical technology, Vose counted her time at the university as a valuable steppingstone that prepared her for her destiny in medicine. She said that the background knowledge gained via her medical technology degree made her first 2 years in medical school much easier due to a great amount of overlap.

After graduating from SDSU in 1979, Vose moved on to medical school at the University of Nebraska Medical Center (UNMC) in Omaha. She enjoyed doing research—she admits that her clinical and interpersonal skills were not quite honed yet. The most important lesson Vose learned in medical school was to stay persistent and to continue to push through roadblocks, something she has carried with her for the rest of her career.

During her time at UNMC, Vose also spent time working with James O. Armitage, MD. She credits her time with Armitage as a crucial step on her path into oncology, and into lymphoma clinical care and research in particular.

Armitage is the Joe Shapiro Professor of Medicine and a professor in the Division of Oncology & Hematology at UNMC. Armitage is also the 2018 recipient of the Giants of Cancer Care® award for lymphoma for his expertise in treating non-Hodgkin lymphoma (NHL), Hodgkin disease, and chronic lymphocytic leukemia (CLL), as well as for playing a critical role in the development of bone marrow transplantation. He was also a former ASCO president in 1997.

“I was interested in cancer cells and looking at them underneath the microscope,” Vose explained of her decision to ultimately go into oncology. “But beyond that, I wanted to take care of patients.. So, oncology presented a way to combine my interest in cancer with helping people. I got interested in hematology because I kind of just enjoyed looking at blood cells in the microscope.”

Vose also really values the female role models under whom she worked during her fellowship, identifying Anne Kessinger, MD, and Margaret A. Tempero, MD, the 2020 Giants of Cancer Care®award winner for gastrointestinal cancers, as mentors who played large roles in molding her early career. Kessinger, who contributed extensively to the field of stem cell treatment in oncology and pioneered the apheresis process, was honored with professor emerita status by UNMC in 2018.

After completing her residency in internal medicine, serving as chief resident, and completing an oncology/hematology fellowship at UNMC, Vose officially began her long career with the institution as an assistant professor of medicine in 1990. She became an associate professor of medicine in the hematology and oncology in 1994 and was awarded tenure by the university in 1997.

In 1997, Vose also stepped into her first major leadership role at UNMC, serving as vice chair of the Department of Internal Medicine, a role she held until 1999. From 1998 to 2003 she was a professor of medicine in the Oncology/Hematology before moving into her current role as the division chief and the Neumann M. and Mildred E. Harris Professor in the Division of Oncology & Hematology at UNMC.

Throughout her career, Vose has been a vital member of research teams focused on translational research aimed at improving and expanding therapy options for patients with Hodgkin lymphoma and NHL. She contributed to the phase 1/2 trial that examined brentuximab vedotin (Adcetris) plus nivolumab (Opdivo) in patients with relapsed/refractory Hodgkin lymphoma. Among 91 patients the overall response rate (ORR) was 85%, including a 67% complete response (CR) rate, and a 3-year overall survival rate of 93%.

These results improved upon those achieved with single-agent brentuximab vedotin in a phase 2 study, in which patients with relapsed or refractory Hodgkin lymphoma achieved an ORR of 72% and a CR rate of 33%.

In 2011, Vose earned her MBA from the University of Colorado in Boulder. She considers it an important step in her development as a professional and a leader. Vose noted that before finishing the program, she was not well versed in the business and interpersonal skills needed to deal with the hospital and university administration locally or with national institutions. The program, specially tailored to health care providers, greatly improved her management skills and helped her to better understand the complexities of the business end of the health care world, Vose said.

“[The project encompasses] 23 centers throughout North America, where we collaborate together to do genomic analysis on specimens,” Vose explained. “Then we look at the clinical outcomes specifically related to prognostic variables, the treatment they have received, and long term outcomes.

“We will continue to use those specimens and use that analysis of the genomic analysis for several more years in different research projects.”

Vose served as the American Society of Clinical Oncology (ASCO) president from 2015 to 2016, an honor that she continues to hold very dear. She valued the travel opportunities that came with the position and was able to continue to hone her networking and public speaking skills. Getting more junior faculty involved with ASCO in terms of professional development opportunities was something she took particular pleasure in.

“Definitely my biggest accomplishment was being ASCO president,” she said. “It is a huge honor [to be one of] only 58 presidents of ASCO ever. That is a pretty small club, and something that very few people get to do.”During her time as ASCO president, Vose had the special honor of meeting with then–Vice President Joseph R. Biden when he spoke at the 2016 ASCO Annual Meeting as part of his Cancer Moonshot initiative. Vose was able to spend some one-on-one time with the current president (with a Secret Service agent in tow, of course).

“He was very open and sincere,” Vose recalled. “And because of the experience with his son, he really wanted to try to improve cancer research as much as possible. That’s why he formed the Moonshot program.”

Overall, Vose counts her time spent pioneering new treatments for lymphoma as some of her most impactful work. She singled out her early clinical research on Bruton tyrosine kinase (BTK) inhibitors, as an area that she really enjoyed helping to develop.

“When BTK inhibitors were first being used, we did not really know what to expect,” Vose recalled. “[What we saw was] patients with huge lymph nodes having their lymph nodes shrink over a matter of days or a week. At the same time, the lymphocyte count in the blood went way up. We did not really know what that meant. Basically, it was mobilization of the lymphocytes, and then they are destroyed by the body. We have learned, over time, that actually [indicates] success of the treatment.”

Newer treatments in the lymphoma and hematology space are also piquing Vose’s interest, particularly chimeric antigen receptor (CAR) T-cell therapies. The potential of the technology in malignancies other than blood cancers intrigues Vose, too.

“Twenty years ago, [CAR T-cell agents] were a figment of our imagination,” Vose said. “And now, they are reality. [It shows that] lots of [ideas we have] today, we may not [be able to bring to fruition] today, but we might be able to do so 10 years from now.”

Vose has published more than 400 papers in her career and continues to be involved in clinical trial research in addition to treating patients with NHL, Hodgkin lymphoma, and CLL. She also currently serves as a codirector of the James O. Armitage Center for Hematological Malignancies Research, named after her mentor.

The Armitage Center keeps track of data for patients with lymphoma, such as biopsies and clinical and outcomes information, Vose explained. Long-term data on thousands of patients treated with a multitude of different therapies are used to contribute to various publications. The center also houses specimens that are used in genomic research to identify new hematologic malignancy subtypes.

Vose appreciates the mentorship roles that she now holds and is fulfilled by helping other clinicians and students advance their careers in the family-like environment that she tries to foster in her division. She also encourages others to get involved in leadership roles as she has, knowing their professional and personal value.

Taking Time to Enjoy the Ride

In her personal life, Vose is very fond of traveling, an appreciation that she says was developed at a young age. Following her father’s early retirement, Vose’s parents took the family on exotic vacations to places like Nepal and Tibet, which she recalls as being 2 of her favorite destinations back then. She recalls being fascinated with just how different those regions—which were then quite untouched by Western-style development—were from anything she’d experienced to that point.

That persistent travel bug has led to Vose visiting all kinds of destinations in Asia, South America, Africa and Europe. She has visited 6 of the New Seven Wonders of the World and plans a trip to Machu Picchu in the not-too-distant future to complete the set.

Vose also got married in the past year. Her husband has 2 children and the new family enjoys gathering together to play board games. In Nebraska, college football is king, and all 4 family members are rabid Nebraska Cornhuskers fans

They make it a point to watch every game either at Memorial Stadium—said to be the third largest city in the state on game days—or on television.

“Getting married in the last year, during a pandemic—that was an interesting experience,” Vose remarked. “But I’m proud of now having a family and being able to share some of these wonderful things with them.

An avid artist, Vose spends some of her free time working on projects; watercolor, pen, ink, and acrylics are her primary media. To stay active, she runs and plays pickleball with friends.

Vose loves living in Omaha. She finds it very similar to the environment she valued so much back home in Mitchell. She appreciates the friendly people and ease of access, even if the winters can sometimes be a bit daunting, she admits.

“I hope to continue to help more physicians reach their goals in research, clinical practice, and academics,” Vose said, in discussing her future. “And to make people’s lives as good as I can, both for my faculty and for my patients. I want to try to work on a lot of these clinical trials and get new therapies for patients, to cure as many of them as possible with good quality of life and good outcomes. Personally, I look forward to doing more traveling, spending more time with my family, and seeing the world.”