Transcript: Michael A. Davies, MD, PhD: I think that the results that we’ve seen with ipilimumab and nivolumab in patients with brain metastases are remarkable. In both the CheckMate204 study published in the New England Journal of Medicine and the ABC study published in The Lancet Oncology, ipilimumab and nivolumab had intracranial response rates between 45% and 60%. Again, to your point, what was also impressive about it was the fact that in contrast to what we saw with dabrafenib and trametinib, almost all of those responses are lasting for at least 1 year and potentially even longer.

One of the things to keep in mind is that those patients who were enrolled in those studies weren’t on steroids. And so in the real world, where we see patients with cerebral edema who are on steroids, we actually don’t have data for immunotherapy. In the ABC trial, those patients actually were not allowed to have had previous radiation to the brain. For a patient who meets the criteria we saw in those trials, I do think that ipilimumab-nivolumab looks like the standard of care for patients who have brain metastases. But I think we’re also learning ab&shy;out how we handle patients, again, who are on steroids, who need sort of quick control. The disease control rate was much better with dabrafenib-trametinib than it was with the immunotherapy regimens.

Axel Hauschild, MD: Caroline, where do you still see a role for BRAF and MEK inhibitors in the brain metastases patient population? What is a clear signal for you to go with the BRAF-MEK regimen first, and not the immuno-oncology combination?

Caroline Robert, MD, PhD: I tend to prescribe a BRAF-MEK regimen when a patient’s case is very catastrophic, like when the patient is going to die within the following weeks. Sometimes I’m afraid that ipilimumab-nivolumab doesn’t have time to work. Maybe I should change? I don’t know.

Axel Hauschild, MD: So you’re not giving it for 3 months, achieving a nice response, which is very quick, and then switching to some sort of maintenance treatment with the immune checkpoint blockade?

Caroline Robert, MD, PhD: No, we don’t do that outside of a clinical trial. I know some colleagues do that, but I don’t think we learn anything from it. I think for a patient who is responding, you change. Especially in this situation, sometimes it can be very severe for the patients not to respond. He was responding, and you changed the therapy. All of a sudden, things go bad and there is toxicity. If you don’t address the question and bring some response…I would not do that.

Merrick I. Ross, MD: Is there experience yet with the flip-dosing of ipilimumab-nivolumab in brain metastases, or not yet?

Axel Hauschild, MD: Not yet.

Merrick I. Ross, MD: The 511 trial didn’t have any patients with brain metastases.

Caroline Robert, MD, PhD: No, but in your hospital, you do an intrathecal injection of anti—PD-1 [anti–programmed cell death protein 1] in brain metastases. Do you have preliminary data on that?

Dr. Thomas on the Safety Profile of Lifileucel Plus Pembrolizumab in Advanced Melanoma 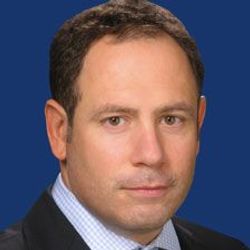