In recent years, advancements in the treatment of patients with metastatic melanoma have proceeded in 2 areas: targeted therapies and immunotherapies.

In recent years, advancements in the treatment of patients with metastatic melanoma have proceeded in 2 areas: targeted therapies and immunotherapies. There are now multiple choices in both modalities and, for targeted therapies, the options include dual inhibitor combinations.

OncLive: What factors do you consider when determining the optimal frontline treatment for this patient with metastatic melanoma?

Jeffery S. Weber, MD, PhD, recently sat down with OncLive to discuss treatment considerations for 3 cases of patients with metastatic melanoma. Weber, deputy director of the Laura and Isaac Perlmutter Cancer Center, co-director of the Melanoma Program, and head of Experimental Therapeutics at NYU Langone Medical Center, discussed these cases during a live, case-based peer perspective event.Weber: The factors are what the disease burden is and what the pace of the disease is. I think those are the 2 most important factors. With a patient with a BRAF mutation, the biggest factor would be how much disease do they have at the baseline—their disease burden and their LDH, which is really one and the same&mdash;and what is the pace of the disease, how fast is it growing. 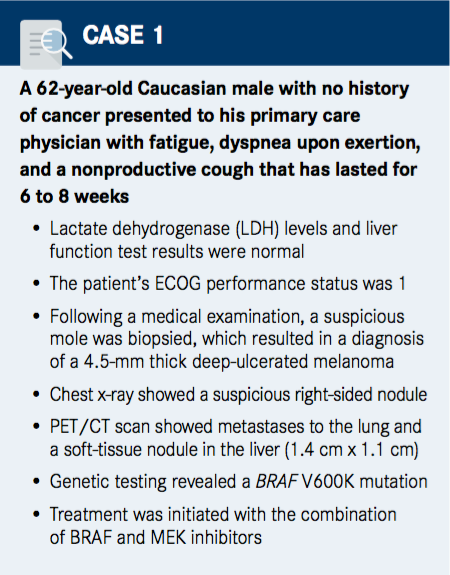 How might this patient’s moderate disease burden impact his potential for a response to targeted therapy?

It’s well known from a number of studies, including studies recently presented at the European Society for Medical Oncology (ESMO) meeting, that the LDH burden and the number of sites of disease have a clear impact on your ability to have long-term survival with the use of BRAF/MEK inhibition.

How durable a response to the targeted therapy combination would you anticipate for this patient, based on his LDH level, age, and sites of disease?

What impact have BRAF/MEK inhibitors had on the management of metastatic melanoma since their initial approval in January 2014, and how has this changed practitioner attitudes toward molecular testing of melanoma?

When testing is indicated, which mutations should be assessed?

If required, what would your second-line therapy be in this patient who received frontline BRAF and MEK inhibitors?

If you look at the slides from the presentation of Carolyn Robert, MD, PhD, if you have a normal LDH and 3 or fewer sites of disease, the survival at 2 to 3 years is greater than 50%, implying that those patients will do very well long term. It may constitute the tail of the curve that we can see with targeted therapy, so those patients will have a prolonged duration of response, which is excellent.A normal LDH patient with a relatively low disease burden—that is, modest disease burden plus a few sites of disease&mdash;is a patient who can do very well in the long term. You’re anticipating a response duration of years, with a potential plateau on that survival curve.Clearly, it has had a significant impact in prolonging survival where, for all the BRAF-mutated patient population, we’re talking a median survival of over 2 years. That would be compared with a decade ago when your chemotherapeutic survival was probably no more than 10 months, so that’s a significant increase. It’s also a significant increase over ipilimumab (Yervoy) alone, where you’re talking maybe 15 months, and it’s certainly caused us to routinely, in all patients with stage III and IV disease, test for BRAF mutations. In most academic centers, there will be a genomic panel that is obtained.We always look for BRAF V600E and BRAF V600K, we usually look for NRAS, and often we will look for KIT if it’s mucosal or acral lentiginous melanoma.If this is a patient who went on BRAF/MEK inhibitors, usually in a low-burden patient we would go to a PD-1 drug alone. 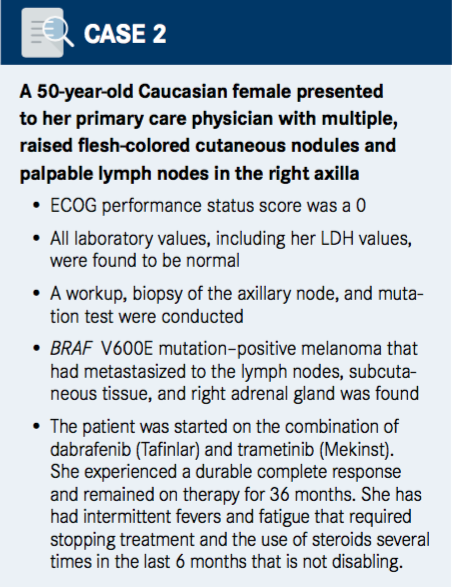 What factors do you consider when determining treatments for patients like this who are BRAF mutated?

Is the durable response for this individual typical for a patient with a low disease burden? Would it be safe to tell the patient to stop therapy if she is in stable, complete remission?

The factors to think about are disease burden, LDH, and the desire of the patient to deal with toxicity, because that is often a big issue. This is a patient who was intermediate, meaning there was an intermediate disease burden, although the LDH was normal and they could have gone either way. You could have reasonably put someone like this on BRAF/MEK inhibition, or you could have put them on immunotherapy. It all depends on the patient’s individual choice that makes the difference.With BRAF/MEK inhibition, it’s always tough to decide when to stop therapy. With almost all targeted therapies of this kind in solid tumors, you should basically treat them until they progress.

How do we factor in this patient’s LDH, sites of disease, and age in predicting the likelihood of achieving a durable response, as she experienced?

I would not feel comfortable telling someone like this, if they were tolerating the drug well, to stop treatment. Durable response would not be atypical for someone with a low disease burden, or a moderate disease burden and a normal LDH who has what looks like just a modest amount of total disease.Usually the younger patients will have V600E, rather than V600K, which means they have a greater chance for a long-term response. And, with the low LDH and the modest disease burden, those are the patients who will do well long term. 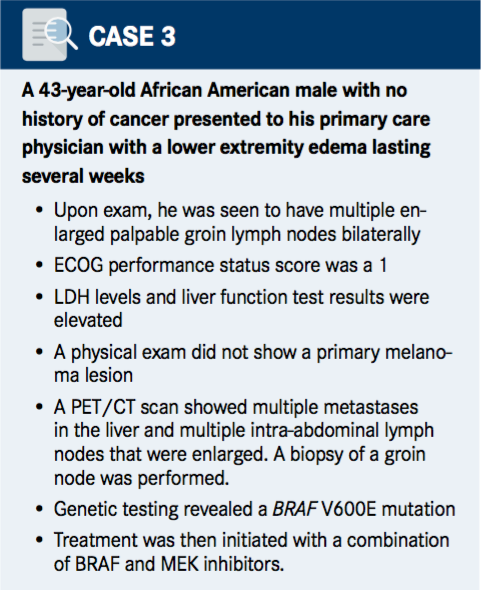 What factors do you consider when determining the initial treatment for patients like this who are symptomatic, have a high LDH and disease burden, and have a BRAF mutation?

Would you consider switching to immunotherapy after achieving a good response?

In a patient like this who is symptomatic, most people would agree that you would be committed to going with BRAF/MEK up front, though some would consider an ipilimumab/ nivolumab (Opdivo) combo up front because you can see deep and rapid responses.Absolutely. The dirty little secret is that a lot of doctors will give 8 weeks of BRAF/MEK and, hopefully before they develop a resistance, will then switch to immunotherapy. Usually, it would be nivolumab and carry on from there after that initial induction of BRAF/MEK.

Interestingly, if you could reintroduce BRAF/ MEK, if there was a long interval where you had no evidence of progression, say on the immunotherapy and then 6 months, a year later, you could switch back to immunotherapy—that’s still an open question.