Neoadjuvant Apalutamide Does Not Interfere With Robotic Prostatectomy

Intense androgen receptor inhibition with neoadjuvant apalutamide (Erleada) did not complicate robotic prostatectomy surgical outcomes, according to an analysis of the phase 2 NEAR trial (NCT03124433) presented at the 2021 European Association of Urology Annual Congress.

“Neoadjuvant androgen deprivation therapy has been previously reported to complicate prostatectomy; [however, data on the effect of] neoadjuvant apalutamide prior to robotic prostatectomy has not been described,” Xin Yan Yang, MBBS, said in a presentation of the data. “We did not encounter any difficulty because of the neoadjuvant therapy, there was no excessive blood loss and there were desmoplastic changes in the tissue that made the surgery more difficult than usual,” said Yang, a medical officer and resident at Singapore General Hospital in Thailand.

The NEAR trial enrolled 25 patients with biopsy-proven, organ confined prostate cancer. Patients with intermediate- to high-risk disease as defined per D’Amico criteria were recruited. Neoadjuvant apalutamide was administered at a dose of 240 mg daily for 12 weeks, after which all patients underwent robotic radical prostatectomy with pelvic lymph node dissection. Yang noted in a discussion that investigators did not perform the surgical technique any differently than their routine procedure for this patient population and began with a bilateral seminal vesicle dissection.

Neoadjuvant apalutamide resulted in a statistically significant reduction in serum prostate-specific antigen (PSA) levels over a 12-week duration of treatment (P < .0001). After prostatectomy, there was a further reduction in PSA levels also deemed significant (P = .001). Moreover, mean quality-of-life scores based on the European Organization for Research and Treatment of Cancer Quality of Life Questionnaire Version 3.0 were not significantly reduced (P = .08).

After prostatectomy, 40% of patients had grade 3 or higher disease per the International Society of Urological Pathology (ISUP) guidelines and all patients had at least stage pT2c disease. The mean nodal yield was 24 (range, 4-49) and 73% of patients had negative margin status. Positive surgical margins were found in 3 patients (27%).

Data from the NEAR trial was compared with outcomes from prospective analysis of a multiracial Asian population of patients from a single institution who were underwent prostatectomy without neoadjuvant apalutamide (n = 725). Findings showed that perioperative outcomes of estimated blood loss (EBL), length of stay (LOS), catheter time, and complication rates, prostatectomy with neoadjuvant apalutamide produced similar outcomes.1,2

Yang presented a case study of a 71-year-old Chinese male with no past medical history. The subject had D’Amico high-risk disease, with a preoperative serum PSA of 43 µg/L. The patient also had a Gleason score of 4+4 via biopsy (ISUP grade 4), with clinical T3b bilateral disease.

The subject’s multiparametric MRI showed significant disease involving both prostatic lobes, with possible right extracapsular extension and involvement of the root of the right seminal vesicle and neurovascular bundle.

Surgery began with a posterior dissection, delivering both seminal vesicles and the left vas deferens. The rectoprostatic fascia was incised and the rectum was dissected free. The surgical planes of dissection were preserved despite 12 weeks of neoadjuvant apalutamide, with no increase in tissue desmoplastic reaction.

Upon histological examination of the specimen, ypT3bN1 and ISUP grade 4 disease was present, Yang reported. Of the 47 lymph nodes, 2 were positive for adenocarcinoma. The postoperative PSA level at 4 weeks was under .03 µg/L.

“Perioperative outcomes are comparable to a historical series without neoadjuvant therapy,” Yang concluded who noted that “neoadjuvant apalutamide is well tolerated but associated with a reduction in libido.” 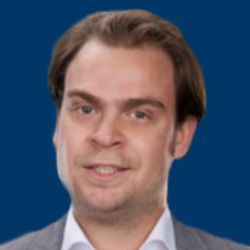