Neoadjuvant Checkpoint Inhibition Shows Promise in TNBC, But Is Not Ready for Clinical Use

Although phase 3 data suggest that the addition of checkpoint inhibitors to neoadjuvant chemotherapy could improve pathologic complete response rates for patients with early-stage triple-negative breast cancer, immature data and the risk of long-term toxicity indicate that the therapy is not ready for primetime 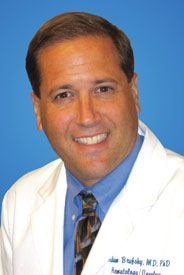 Although phase 3 data suggest that the addition of checkpoint inhibitors to neoadjuvant chemotherapy could improve pathologic complete response (pCR) rates for patients with early-stage triple-negative breast cancer (TNBC), immature data and the risk of long-term toxicity indicate that the therapy is not ready for primetime, said Adam M. Brufsky, MD, PhD, in a virtual presentation during the 38th Annual Miami Breast Cancer Conference®, an event hosted by Physician’s Education Resource®, LCC.1

“We have to wait for [additional data] before we can make a decision [on neoadjuvant checkpoint inhibition]. We have to be careful, in anything we do, of chasing the bright, shiny object,” said Brufsky, medical director of the Magee-Women’s Cancer Program, co-director of the Comprehensive Breast Cancer Center, and associate director for clinical investigations at the University of Pittsburgh Medical Center Hillman Cancer Center.

The phase 3 KEYNOTE-522 trial randomized patients with newly diagnosed TNBC (n = 1174) 2:1 to receive 200 mg of neoadjuvant pembrolizumab (Keytruda) every 3 weeks (n = 784) or placebo (n = 390).2All patients received 4 cycles of carboplatin plus paclitaxel followed by 4 cycles of doxorubicin or epirubicin plus cyclophosphamide. Following surgery, adjuvant pembrolizumab was continued for 9 cycles or until disease recurrence or unacceptable toxicity.

Event-free survival (EFS) and pCR were dual primary end points for the study; pCR was defined as ypT0/Tis ypN0 disease.

“PD-L1 appeared to be a biomarker of response in that the PD-L1–[positive] group had more of a benefit in both arms [with pembrolizumab compared with the PD-L1–negative group],” said Brufsky, who is also a professor of medicine and associate chief in the Division of Hematology/Oncology at the University of Pittsburgh School of Medicine.

“In some people, [the hypothyroidism] is long term,” said Brufsky. “A lot of women who [develop] breast cancer have hypothyroidism. [Pembrolizumab] is potentially turning a subclinical hypothyroidism into something that is clinically significant.”

Notably, on February 9, 2021, the FDA’s Oncologic Drugs Advisory Committee (ODAC) unanimously voted 10 to 0 against the approval of pembrolizumab in combination with chemotherapy as neoadjuvant treatment for patients with high-risk, early-stage TNBC.3 The vote deferred regulatory action on the submitted biologics license application for the regimen.

The ODAC group determined that the survival findings of the KEYNOTE-522 trial were immature and required longer follow-up.

The phase 3 IMpassion031 trial utilized a similar design to the KEYNOTE-522 study. Patients with TNBC whose primary tumor was greater than 2 cm and who had known PD-L1 status (n = 333) were randomized 1:1 to 840 mg of intravenous (IV) atezolizumab (Tecentriq) every 2 weeks plus IV nab-paclitaxel (Abraxane) at 125 mg/m² every week for 12 weeks followed by continued atezolizumab plus doxorubicin at 60 mg/m² and cyclophosphamide at 600 mg/m² every 2 weeks for 8 weeks, which was then followed by surgery, or placebo plus the chemotherapy regimen, also followed by surgery.4

“Again, 2 things are being told to us here,” Brufsky said. “One is that PD-L1 appears to be a predictive biomarker for response to chemotherapy. Two [is that patients] are getting additional benefit on top of that by using a checkpoint inhibitor.”

Regarding safety, more treatment-related serious AEs were observed with atezolizumab vs placebo at 23% vs 16%, respectively.

The phase 3 NepTRIPaPDL1 trial randomized 280 patients with high-risk TNBC 1:1 to receive area under the curve 2 of neoadjuvant carboplatin plus 125 mg/m2 of weekly nab-paclitaxel and 1200 mg of atezolizumab every 3 weeks for 8 cycles or carboplatin/nab-paclitaxel alone followed by surgery.5

Additionally, the NeoTRIPaPDL1 study evaluated the expression and dynamics of stromal tumor infiltrating lymphocytes (TILs) and intratumor TILs and their association with pCR.

“In this study, we saw very few differences in pCR rate, which is interesting. Why this seemed to occur in this trial and not the others is [unknown]. There could have been imbalances in TILs…for reasons that are not quite clear. [However, these data] again tell us that either PD-L1 staining and/or TILs are very important predictive markers for response to chemotherapy,” Brufsky said.

The key messages from these data suggest that the chemotherapy backbone and whether anthracycline-based therapy or cyclophosphamide is selected factors into how much benefit patients derive from the addition of neoadjuvant checkpoint inhibition, Brufsky explained.1

Additionally, although baseline PD-L1 status and TIL status was not found to be predictive of benefit from neoadjuvant checkpoint inhibition, Brufsky “contends it is predictive potentially of the benefit to the chemotherapy.”

Notably, the ongoing, randomized, phase 3 GeparDouze/NSABP B-59/GBG96 trial (NCT03281954) is evaluating the use of neoadjuvant atezolizumab plus chemotherapy followed by surgery and atezolizumab or placebo plus chemotherapy followed by surgery and placebo in patients with TNBC.6 The results of this study may shed additional light on the clinical utility of neoadjuvant checkpoint inhibition, Brufsky explained.

Until then however, “given the long-term toxicity with irreversible hypothyroidism and the immature survival data, do not currently use checkpoint [inhibitors] in daily practice. However, we have a disease that is tough to treat and, even with standard chemotherapy, a certain percentage of people will relapse. There clearly appears to be benefit here, and scientifically we need to understand why PD-L1 and TILs give a higher pCR [with the addition of checkpoint inhibitors] compared with standard chemotherapy,” Brufsky concluded.