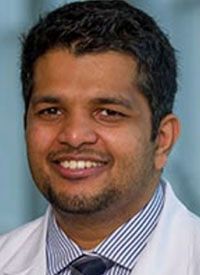 With a variety of available options for diffuse large B-cell lymphoma (DLBCL), pushing effective therapies into the up-front setting can improve event-free survival (EFS) rates and potentially help patients avoid costlier treatments down the line, according to Praveen Ramakrishnan, MD, MS. The second-line and beyond settings are also expanding with CAR T-cell advances that can bolster outcomes in patients with relapsed/refractory disease.

“DLBCL has seen an explosion of many treatment choices for patients in the frontline setting, and also in the second-line, third-line, and beyond settings with all these new agents,” Ramakrishnan said in an interview with OncLive®.

In the interview, Ramakrishnan discussed the evolution of DLBCL treatment, the implications of the phase 3 POLARIX (NCT03274492), ZUMA-7 (NCT03391466), and TRANSFORM (NCT03575351) studies, and how emerging bispecific T-cell engagers (BiTEs) and antibody-drug conjugates (ADCs) may increase treatment accessibility beyond the limitations of CAR T-cell therapy for patients at various disease stages.

Ramakrishnan is an assistant professor in the Department of Internal Medicine at UT Southwestern Medical Center in Dallas, Texas.

OncLive®: Could you summarize the recent treatment advances that the field of DLBCL has seen?

Ramakrishnan: The past 2 years have been [eventful] for DLBCL. This is an apt time to get educated about the big advances that have happened in our field over the past 2 years.

Many new medications have been approved for DLBCL in the relapsed setting. For example, the ADC polatuzumab vedotin-piiq [Polivy] in combination with bendamustine and rituximab [Rituxan; BR] is approved in the third-line setting and beyond. Loncastuximab tesirine-lpyl [Zynlonta] is another ADC. Tafasitamab-cxix [Monjuvi] plus lenalidomide [Revlimid] is also a combination in the second-line setting and beyond for DLBCL.

The study that made the headlines, the POLARIX study, looked at polatuzumab vedotin in the frontline setting in combination with R-CHP [rituximab plus cyclophosphamide, doxorubicin, and prednisone]. This is the first study that has shown an improvement in progression-free survival [PFS] compared with our standard of care [SOC], which is R-CHOP [rituximab plus cyclophosphamide, doxorubicin, vincristine, and prednisone]. The POLARIX combination is still not FDA approved, but it will hopefully be approved soon, and it has implications in our practice.

The [phase 2] L-MIND study [(NCT02399085) is investigating] tafasitamab and lenalidomide, and the [phase 2] LOTIS-2 study [(NCT03589469) is looking at] loncastuximab tesirine. Other options are also available for relapsed/refractory DLBCL.

Cell therapies like CAR T cells have [also had an effect] in our field. [The 2021 ASH Annual Meeting and Exposition had] 3 studies looking at CAR T cells in the second-line setting for DLBCL. The ZUMA-7 and TRANSFORM trials led to the approvals of axicabtagene ciloleucel [axi-cel; Yescarta] and lisocabtagene maraleucel [liso-cel; Breyanzi] in this disease in the second-line setting. The [phase 3] BELINDA study [NCT03570892] was not a positive trial.

The current algorithm for treating DLBCL [includes] CAR T cells and other options. As the field is getting crowded, [the question is:] How are we going to sequence these treatments for our patients?

Another important drug class is BiTEs. These are also going to be important agents in our therapeutic armamentarium for DLBCL outside of cell therapy with CAR T cells.

To recap, [we have seen] first-line advances [with the POLARIX regimen, and advances in the] second line and beyond with the new immunotherapies tafasitamab, loncastuximab tesirine, and polatuzumab vedotin. [As seen in pathbreaking studies,] CAR T cells in the second-line setting will be practice changing, [with the pivotal data] that have come out since December 2021. Bispecific antibodies are also likely to become available for our patients in the future.

What top data were seen in the POLARIX study, and what implications might that study have on practice going forward?

The general views on this study among oncologists are varied, but nobody can deny the fact that this is the first study that has ever shown a PFS advantage over our SOC, which is R-CHOP. R-CHOP has been our standard since the late 90s, since rituximab came out.

This is a large, multi-center, international, collaborative study mainly done in Europe, with a few sites in America. It was a well-balanced study that specifically looked at patients with higher-risk large cell lymphoma and an [International Prognostic Index (IPI) score] of 2 or more. Patients were randomized to get either polatuzumab vedotin plus R-CHP or R-CHOP.

We saw a 6.5% PFS advantage [with polatuzumab vedotin]. The main question we have is: Are we going to prevent 1 in 5 patients with large cell lymphoma from having a relapse and prevent them from having to go through CAR T cells or stem cell transplant in the future?

The other big point is that adding a new drug always comes with skepticism. Is it going to have more toxicity? The toxicity profile of adding polatuzumab vedotin was similar to adding vincristine to R-CHOP. It is safe, and effectiveness-wise, R-CHOP is such a [difficult] regimen to beat, which is why we only saw a PFS advantage.

Skeptics may worry about having an overall survival [OS] advantage in the future. That is still to be seen. What we are seeing [currently] is this is a safe and effective regimen that is improving PFS, the first study of its kind to have demonstrated this.

When looking at the subgroup analysis of this study, certain biologic subtypes of DLBCL may benefit more from polatuzumab vedotin. For example, the activated B-cell subtype of DLBCL seems to have a slight edge, and there may be some biological explanations as to why it is responding more than germinal center B-cell-type disease. Will all-comers with large cell lymphoma with an IPI score of 2 or more who meet the study inclusion criteria [benefit from] polatuzumab vedotin plus R-CHP? Is this going to be our SOC?

There is more to be seen, but this is a welcome addition, especially for patients who don’t have good salvage options. Especially regarding CAR T cells and BiTEs, we at academic institutions are privileged and our patients are lucky to have access to these agents, but other centers, counties, and cities don’t have enough access to these expensive cellular therapies. Using a more effective up-front regimen may prevent [patients] from having to go through these more costly treatments in the future.

What are the implications of CAR T products based on ZUMA-7, TRANSFORM, and BELINDA?

These are the most exciting data to have come out of the [2021 ASH Annual Meeting and Exposition]. These were awaited trials. [ZUMA-7 and TRANSFORM were 2] positive trials that showed an advantage in terms of EFS and PFS for patients with DLBCL who were either primary chemotherapy refractory or who relapsed within the first year after initial treatment.

These patients were randomized to either receive CAR T cells or standard salvage chemotherapy and transplant. Treatment with CAR T cells showed nearly a quadrupling of EFS and a similar advantage in terms of PFS. In these studies, the follow-up is [still] short, [although] TRANSFORM is already showing a tendency toward improved OS. These studies have led to the approvals of liso-cel and axi-cel as second-line options for patients who meet the trial criteria, meaning they are either primary chemotherapy refractory or they have disease relapse within the first year after [initial] treatment.

Regarding BELINDA, there are multiple reasons why it was a negative trial, including patient selection and the delay in manufacturing the product. Unfortunately, there was a long wait period for patients to receive CAR T cells on that study, and they were subjected to more chemotherapy due to that wait, so they possibly selected out the highest-risk patients.

In your view, what may treatment sequencing look like with all these options?

Some situations are black and white, and some situations are more gray. For example, our up-front choices as of right now remain chemoimmunotherapy options, like R-CHOP or dose-adjusted R-EPOCH [rituximab plus etoposide phosphate, prednisone, vincristine sulfate, cyclophosphamide, and doxorubicin hydrochloride] for more aggressive variants of large B-cell lymphoma like double-hit lymphoma.

The question is: Can polatuzumab vedotin plus R-CHP be incorporated into the up-front setting? Off-trial, we have started using it in select patients who [resemble those who benefitted most] in the trial. Will that [combination] get approved in the future? The answer is possibly yes.

With [current] up-front strategies in advanced-stage large cell lymphoma, 60% of patients are cured. But unfortunately, 30% to 40% of patients will relapse. If those relapses are going to happen, [they will happen] mostly within the first 2 years.

If patients are going to relapse within the first 12 months, the first decision point is: Can that patient receive CAR T cells? If so, then at that point, based on availability, they should have the option to go for either liso-cel or axi-cel, per the labels. Clinical trials will always be our first choice at every point along the treatment algorithm. However, outside of a clinical trial, for first relapse within the first year of treatment, CAR T-cell therapy is the [best] option.

For relapse that happens beyond a year or 2, we still have autologous stem cell transplant [ASCT] as an option. If these patients demonstrate chemotherapy-sensitive behavior, meaning they go through salvage chemotherapy and have a good response, we at UT Southwestern believe that ASCT still has a role in this disease. Many retrospective registry analyses have shown that ASCT, our time-tested strategy in chemotherapy-sensitive second-line and beyond large cell lymphoma, [is still effective].

For patients who are ineligible for CAR T cells and transplant, we think about our new strategies like tafasitamab plus lenalidomide, polatuzumab vedotin plus BR, loncastuximab tesirine, and the bispecific antibodies, which look extremely promising, especially for patients in the third-line setting and beyond.

What main message should colleagues know about the DLBCL arena?

This is an exciting time to be a lymphoma physician. For DLBCL, which has not seen major advances over the past decade, the past 2 to 3 years have been rewarding with all the effort from investigators across the world developing these new strategies, which are biology-based.

The advances in cell therapy are giving our patients a second chance at a cure. With CAR T cells, we are moving the needle up further, although there is still work to be done because we are not curing all patients who relapse with large cell lymphoma. In the future, [the best sequence will become] clearer as we understand more of the biology and which treatments to choose for which patients at what time. Making the right choices will become slightly more defined in the coming years.

Similar advances are happening across the lymphoma spectrum. In DLBCL in the upcoming years, we may have some more answers. CAR T cells may move up to the frontline setting. We are also going to be a part of clinical trials exploring CAR T cells for very high-risk large cell lymphoma in the first-line setting. The existing dogmas and our standards of care are likely to change in the future.

What ongoing research in DLBCL at UT Southwestern are you excited about?

We have several trials looking at newer bispecific antibodies. We have several trials looking at allogeneic CAR T cells. We are exploring other engineered cells like natural killer cells in clinical trials. We have multiple options for patients who either fail CAR T cells or are not able to access CAR T cells outside of a trial. And then we have options for them to participate in trials. We are also engaged in [studying resistance mechanisms and investigating] combination strategies with CAR T cells to help them persist longer and work better for our patients.