Mosunetuzumab, a novel bispecific antibody, generated durable responses in patients with highly refractory non-Hodgkin lymphomas, including complete remissions in 22.2% of those who had previously received chimeric antigen receptor T-cell therapy. 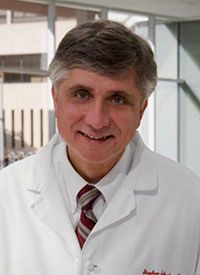 Stephen J. Schuster, MD, director of the lymphoma program at Abramson Cancer Center at the University of Pennsylvania

Mosunetuzumab, a novel bispecific antibody, generated durable responses in patients with highly refractory non-Hodgkin lymphomas (NHLs), including complete remissions (CRs) in 22.2% of those who had previously received chimeric antigen receptor (CAR) T-cell therapy, according to study results presented at the 2019 American Society of Hematology Annual Meeting.1

The agent represents a promising therapy for patients whose disease has recurred after receiving CAR therapy or is progressing too rapidly to be treated with personalized gene therapy, said lead investigator Stephen J. Schuster, MD.

“Unlike CAR T-cell therapy, mosunetuzumab is an off-the-shelf immunotherapy product that can be given to patients without having to genetically modify their T cells,” Schuster, director of the lymphoma program at Abramson Cancer Center at the University of Pennsylvania (UPenn) in Philadelphia, said in a statement.

Mosunetuzumab is a humanized antibody that contains 2 antigen-recognition sites: CD3, a T-cell surface antigen, and CD20, a tumor-associated antigen exclusively expressed on B cells.2 “In binding to the T cells, it’s capable of inducing T-cell activation and, when engaged with a B cell, it will cause a death of the target cell and eliminate those cells,” Schuster said at a press briefing.

He also said the process of producing and obtaining insurance approval for CAR therapy delays treatment by several weeks. “A month or 2 months doesn’t sound long but it’s an eternity when you have a patient with a very fast-paced disease,” he said.

“To be able to use the cellular immunotherapeutic approach [with mosunetuzumab] rapidly in patients who need this approach because traditional immunochemotherapy is no longer working is, I think, a very important aspect,” Schuster added. An off-the-shelf product that has alternative B-cell targets to CD19, which the approved CAR T cell products address, is necessary.”

At the briefing, Schuster reported efficacy results for 191 evaluable patients treated with mosunetuzumab monotherapy during the ongoing phase I/Ib dose-escalation GO29781 study (NCT02500407) in late-line relapsed/refractory B-cell NHLs. The data are from Group B of the study, in which patients received mosunetuzumab intravenously with stepped-up dosing on days 1, 8, and 15 of cycle 1, and then as a fixed dose on day 1 of each subsequent 21-day cycle (maximum 17 cycles).

Notably, patients who previously received CAR T-cell therapy also responded to mosunetuzumab. Among 18 evaluable patients in this cohort, the ORR was 38.9% (n = 7), including a 22.2% CR rate (n = 4). Investigators also observed an expansion of lymphocytes, including residual CAR T cells in 2 of 8 patients, and CRs with and without CAR T-cell expansions.

Schuster described a 58-year-old woman with relapsed/refractory follicular lymphoma (FL) who had 8 prior lines of systemic treatment that included CD19-directed CAR T-cell therapy. The patient achieved a CR after 3 cycles of mosunetuzumab therapy and remains in CR after more than 8 months.

“This not an ongoing therapy forever,” Schuster said. “This is a therapy that patients receive until they’re in remission and then it’s discontinued. Three-quarters of the remission patients are off therapy.”

In the population evaluable for safety, the study has enrolled 270 patients; the median age is 62.0 years (range, 19-96), and 61.2% had a baseline ECOG performance score of 1. The safety population comprises 66.7% with aggressive NHLs, including diffuse large B-cell lymphoma (DLBCL), transformed FL, mantle cell lymphoma, and 31.5% with FL and other indolent NHL types. The median number of prior system therapies was 3 (range, 1-14). In terms of prior therapies, 28.5% had received autologous stem cell transplantation and 71.9% were refractory to their last prior therapy.

Of 30 patients who had received prior CAR T-cell therapy, 22 (73.3%) were refractory to that therapy. This group had received a median 5 lines of prior systemic therapies (range, 3-14).

In the safety analysis, the incidence of all grades of CRS was 28.9% among all participants (N = 270) and 26.7% among those who previously received CAR therapy (n = 30). The majority of these events were of grade 1 or 2 severity, occurred mostly in cycle 1 of therapy, and had a median duration of 2 days (range, 1-59). There were 3 grade 3 CRS occurrences in the total population (1.1%) and 1 in the prior CAR cohort (3.3%). A total of 8 patients received tocilizumab (Actemra) as supportive care and most CRS events (96.6%) were resolved by the clinical cutoff date.

In addition to the refractory setting, Schuster sees potential for mosunetuzumab to be used either before or after CAR T-cell therapy. He noted that 3 of 4 patients in the GO29781 study responded to retreatment with mosunetuzumab, including 1 person who remains in CR.

“It suggests that over time, there was some diminution of the immune response and then the ability to restimulate it,” he said. “It’s not something that we’ve seen with CAR T cells.”

Additionally, Schuster said, treatment with mosunetuzumab does not preclude subsequent CAR treatment. “This could be a bridging approach that doesn’t require chemotherapy that actually stimulates and invigorates T cells and [that] then [can] be used to make a CAR T-cell product,” he said.

Mosunetuzumab, which is being developed by Genentech, also is being studied in combination therapies. In addition to the monotherapy arm reported at the conference, the GO29781 trial will have an expansion phase in which patients receive mosunetuzumab in combination with the PD-L1 inhibitor atezolizumab (Tecentriq), according to the ClinicalTrials.gov website. The international trial aims to enroll 665 participants.

In another phase I study, mosunetuzumab is being evaluated in combination with polatuzumab vedotin-piiq (Polivy), CD79b-directed antibody-drug conjugate with and without bendamustine and rituximab (Rituxan) in patients with relapsed/refractory DLBCL and FL (NCT03671018).