Clara D. Bloomfield, MD, the 2015 Giants of Cancer® award winner for Myeloid Neoplasms and a revolutionary physician-scientist, died March 1 at the age of 77. 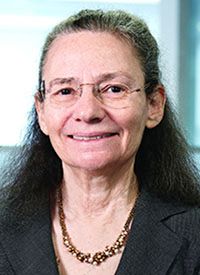 Clara D. Bloomfield, MD, the 2015 Giants of Cancer® award winner for Myeloid Neoplasms and a revolutionary physician-scientist, died March 1 at the age of 77. The Ohio State University Comprehensive Cancer Center—Arthur G. James Cancer Hospital and Richard J. Solove Research Institute (OSUCCC–James), where she was a former director and longtime senior advisor, issued a news release announcing her death on March 3.

The university is planning to hold a ceremony honoring Bloomfield and her work at a later date.

“The cancer community has lost a great friend and leader, a true pioneer in her field. We are all saddened by this loss,” Hal Paz, MD, MS, executive vice president and chancellor for health affairs at Ohio State and CEO of the Wexner Medical Center, said in a news release. “The James Cancer Hospital and Solove Research Institute would not be the fine institution it is today without the many trailblazing contributions made by Dr Bloomfield.”

Bloomfield was the first to demonstrate that chemotherapy could be curative for adults with AML. Physicians at the time thought the disease was incurable, especially for the elderly. She also found that biomarkers can be used to select treatment and predict outcome in adults with AML and lymphoma, a precursor to personalized medicine.

“When I started, the average survival for one type of AML, acute promyelocytic leukemia, was two weeks. Now, 90% are cured,” Bloomfield said to OncLive® in 2015. “I think that’s possible for the rest of AML and we just need to work on it.”

She first identified several now-classic chromosome changes in leukemia and lymphoma, such as the Philadelphia chromosome in acute lymphoblastic leukemia and the rearrangement of 16q22 in AML. She was considered by most to be the world’s authority on how chromosome changes influence treatment and outcome in adult acute leukemia. Her work led to genetics being included in the diagnosis of acute leukemias in the 2001 World Health Organization classification and the National Comprehensive Cancer Network guidelines.

Bloomfield earned her medical degree at the University of Chicago, before moving to the University of Minnesota for her second-year medicine residency and a fellowship in medical oncology. While she was still a fellow, Minnesota tapped her to lead its Leukemia/Lymphoma Service, and she later became the university’s first female full professor of medicine. In 1989, she became professor and chair of the Department of Medicine at Roswell Park Cancer Institute, 1 of the first women to hold that position, and chief of the Division of Oncology at the State University of New York at Buffalo.

She was named director at the OSUCCC—James in 1997, becoming just the third woman to lead a National Cancer Institute (NCI)—designated center. She would become one of OSU’s most decorated investigators, serving as a Distinguished University Professor and as a senior member of the OSUCCC–James advisory committee and the OSU President’s and Provost’s Advisory Council.

“Ohio State’s cancer program is fortunate to have benefited from Dr Bloomfield’s scholarly expertise and leadership skills for so many years,” OSUCCC—James director Raphael Pollock said in a news release. “She will be remembered as a pioneer in the study of hematologic malignancies—particularly acute myeloid leukemia&mdash;whose research led to breakthroughs that have improved treatments and enhanced quality of life for many patients with these diseases.”

“Perhaps more important than her scientific accomplishments was her approach to her work. Her outstanding scholarship, devotion to excellence, passion for mentoring and relentless pursuit of the unvarnished truth are legendary,” Richard L. Schilsky, MD, ASCO executive vice president and chief medical officer, said in a news release. He and Bloomfield worked together for decades in the Cancer and Leukemia Group B (CALGB). “Few people in our field are so accomplished and so respected to be known by first name only. Clara was certainly 1 and we will miss her deeply.”

She was named a Giant of Cancer Care in 2015 in recognition of her efforts as a scientist, a physician, and a pioneering woman in a field dominated by men.

Bloomfield was the first woman to chair the NCI Division of Cancer Treatment Board of Scientific Counselors. She mentored more than 100 women who have served as professors at prestigious universities or as scientists in leadership positions at the NCI or in industry.

“I was able to see that women were put on important national committees and have gotten awards,” she said in 2015. “When I chaired the ASCO program committee, I made it 52% women.”

Mike Hennessy, Jr, president and CEO of MJH Life Sciences™, called Bloomfield “a true innovator” who left an indelible mark on the world of medicine.

“OncLive® and Giants of Cancer Care® would like to extend our deepest condolences to Dr Bloomfield’s family, friends, and loved ones,” Hennessy said. “Her influence will live on in the hundreds of physicians she inspired and the thousands of people who are alive today thanks to her discoveries.”