Only Modest Benefit Seen With Taselisib in PIK3CA-Mutant Breast Cancer 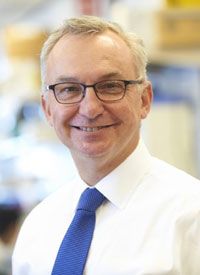 Treatment with taselisib (GDC-0032) in combination with fulvestrant (Faslodex) provided a modest progression-free survival (PFS) benefit of 2 months compared with fulvestrant alone in patients with estrogen receptor (ER)—positive, PIK3CA-mutant locally advanced or metastatic breast cancer, according to results from the phase III SANDPIPER trial that was presented at the 2018 ASCO Annual Meeting.

“These results are positive, but I think we all would agree that they are modest. This is a challenging combination from the point of view of tolerability, but I do think that this establishes proof of principle that this is a bona fide target,” said lead study author José Baselga, MD, PhD, the physician-in-chief at Memorial Sloan Kettering Cancer Center in New York.

PI3K signaling has been indicated as a driver of tumor growth, proliferation, and survival in breast cancers. Baselga noted that PIK3CA mutations are frequently observed in patients with hormone receptor—positive, HER2-negative breast cancerapproximately 40% in patients with advanced ER-positive tumorsmaking it an attractive therapeutic target.

Taselisib is a potent and selective PI3K inhibitor that has shown sensitivity against the PI3K-alpha mutant isoforms and enhanced activity in PIK3CA-mutant tumors and cell lines in previous preclinical and clinical studies.

SANDPIPER is a double-blind, placebo-controlled, randomized phase III study that enrolled 516 postmenopausal women with ER-positive, HER2-negative locally advanced or metastatic breast cancer harboring a PIK3CA mutation (NCT02340221). All patients had disease recurrence or progression during or after aromatase inhibitor therapy and had received no more than 1 prior chemotherapy regimen for metastatic disease and no prior fulvestrant or PI3K/mTOR inhibitors.

Baselga noted that SANDPIPER is the first placebo-controlled, randomized study that has evaluated the efficacy and safety of a mutant-selective PI3K inhibitor, taselisib, when added to endocrine therapy in a biomarker-defined population.

Patients were randomized 2:1 to receive either 4 mg daily of taselisib in combination with 500 mg of fulvestrant (n = 340) or fulvestrant plus placebo (n = 176). Stratification was based on visceral disease, endocrine sensitivity, and geographic region. PIK3CA mutations were assessed using the central cobas PIK3CA mutation test.

An additional portion of the study enrolled patients without PIK3CA-mutant tumors and these patients were randomized 2:1 to the same regimens; however, results of this cohort were not presented at the ASCO meeting.

ORR with the taselisib combination was 28% compared with 11.9% with taselisib alone (P = .0002). With added stable disease, the CBR was 51.5% versus 37.3%, respectively. In the taselisib arm, patients achieved a DoR of 8.7 months compared with 7.2 months with fulvestrant alone. OS data were still immature at the time of data cutoff.

When looking at patient outcomes according to their geographic region, the investigators observed benefit from the addition of taselisib in participants from the United States, Canada, Europe, Australia, and Asia. However, there was no added benefit from taselisib in patients from other countries across the world, which Baselga described as “interesting food for thought.”

The most common AEs observed with the addition of taselisib were gastrointestinal toxicities. Diarrhea of all-grades was seen in 60.1% of patients in the combination arm compared with 19.7% with fulvestrant alone, and hyperglycemia in 40.4% of patients versus 9.4%, respectively.

“Although [taselisib] is powerful against alpha [isoform], it also hits delta and gamma. The side effects we see that are limiting our patients staying on are mostly delta and gamma,” Baselga commented during the question-and-answer portion of the session. “I do think that in the case of breast cancer, what we need to do is to work on more specific alpha inhibitors that will be safer because I think the negative factor here is actually the side effect profile that is based on the non-specificity against the other isotopes.”

For future research, Baselga is looking to more selective PI3K inhibitors that would reduce the off-target effects seen in the significantly increased toxicity from added taselisib in this trial.

ASCO expert Harold J. Burstein, MD, PhD, of the Dana-Farber Cancer Institute, commented on the results of the SANDPIPER trial, saying that “it’s a modest step forward but an important step forward because it does suggest we can effectively target the pathway, and hopefully this is something we can build on.”