Pembrolizumab in combination with several chemotherapy partners led to a statistically significant and clinically meaningful improvement in progression-free survival compared with chemotherapy alone as a first-line treatment for patients with locally recurrent, inoperable, or metastatic triple-negative breast cancer whose tumors expressed PD-L1. 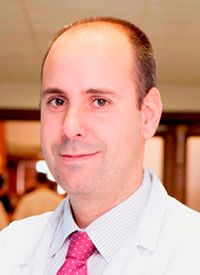 Pembrolizumab (Keytruda) in combination with several chemotherapy partners led to a statistically significant and clinically meaningful improvement in progression-free survival (PFS) compared with chemotherapy alone as a first-line treatment for patients with locally recurrent, inoperable, or metastatic triple-negative breast cancer (TNBC) whose tumors expressed PD-L1 (combined positive score [CPS] of 10 or higher), according to results of the phase 3 KEYNOTE-355 trial (NCT02819518) that were presented during the 2020 ASCO Virtual Scientific Program.1

Moreover, in the intent-to-treat (ITT) population, the median PFS with pembrolizumab combined with chemotherapy was 7.5 months compared with 5.6 months with chemotherapy alone, leading to an 18% reduction in the risk of death (HR, 0.82; 95% CI, 0.69-0.97). Statistical significance was not tested in this patient population.

"Pembrolizumab and chemotherapy demonstrated a statistically significant and clinically meaningful improvement in PFS as compared with chemotherapy alone for the first-line treatment of metastatic TNBC with a PD-L1 CPS of 10 or higher tumors," lead study author Javier Cortes, MD, head of breast cancer and gynecological cancers at Hospital Universitario Ramon y Cajal in Madrid, Spain, and clinical investigator in the Breast Cancer Research Program at Vall d'Hebron Institute of Oncology in Barcelona, Spain, said in a presentation during the meeting.

"The inclusion of taxanes and a known taxane platinum-based regimen permits assessment of the clinical benefit of pembrolizumab in combination with several [used] chemotherapy partners. A trend toward improved efficacy with PD-L1 enrichment was observed in patients treated with pembrolizumab and chemotherapy," Cortes added. "These findings suggest a role for the addition of pembrolizumab to standard chemotherapy for the first-line treatment of [patients with] metastatic TNBC."

The results are from an interim analysis conducted by an Independent Data Monitoring Committee (IDMC), which showed that the addition of pembrolizumab to nab-paclitaxel (Abraxane), paclitaxel, or carboplatin/gemcitabine showed a statistically significant and clinically meaningful improvement in PFS compared with chemotherapy alone in this patient population. In February 2020, the IDMC recommended that the study continue without changes, in order to evaluate overall survival (OS), which is the other primary end point of the trial.2

Pembrolizumab has been evaluated in metastatic TNBC and has demonstrated durable antitumor activity and manageable safety in the KEYNOTE-0123, KEYNOTE-086A4, KEYNOTE-086B5, and KEYNOTE-1196 studies. In these trials, treatment with single-agent pembrolizumab led to objective response rates (ORRs) of 18.5%, 5.3%, 21.4%, and 9.6%, respectively. Improved clinical responses were observed in patients with higher PD-L1 expression, and responses were more durable with pembrolizumab monotherapy than those elicited with chemotherapy.

Moreover, in the neoadjuvant setting, pembrolizumab plus chemotherapy demonstrated a pathologic complete response (pCR) rate of 60% in the KEYNOTE-173 trial.7 Based on these data, the FDA granted a breakthrough therapy designation in October 2019 to pembrolizumab and chemotherapy as a neoadjuvant treatment for patients with high-risk, early-stage TNBC. The phase 3 KEYNOTE-522 trial also showed that patients with newly diagnosed, operable, stage II/III TNBC, regardless of PD-L1 expression, benefited from pembrolizumab with a pCR rate of 64.8% versus 51.2% with placebo, representing an absolute difference of 13.6 percentage points (95% CI, 5.4%-21.8%; P = .00055).8

In the two-part, randomized, phase 3 KEYNOTE-355 trial, investigators evaluated pembrolizumab in combination with investigator's choice of either nab-paclitaxel, paclitaxel, or gemcitabine/carboplatin compared with placebo plus 1 of the 3 chemotherapy agents in patients with previously untreated locally recurrent inoperable or metastatic TNBC.

Patients must have been at least 18 years old, had central determination of TNBC and PD-L1 expression, completed treatment with curative intent at least 6 months prior to first disease recurrence, had an ECOG performance status of 0 or 1, a life expectancy of 12 weeks or longer from randomization, adequate organ function, no use of systemic steroids, no central nervous system metastases, and had no active immune disease.

In part 1 of the open-label study, investigators evaluated the safety and tolerability of pembrolizumab in combination with 1 of the chemotherapy regimens in 30 patients.

Patients were stratified by chemotherapy given on study, PD-L1 tumor expression (CPS of 1 or higher vs CPS of less than 1), and prior treatment with the same class of neoadjuvant/adjuvant chemotherapy (yes vs no).

The coprimary end points of the trial were PFS and OS in patients with PD-L1—positive tumors and in the ITT population. Secondary end points were ORR, duration of response, disease control rate, and safety.

Overall alpha was controlled at one-sided 0.025 and was split among PFS (0.005), OS (0.018), and ORR (0.002). The prespecified plan allowed the alpha from successful hypotheses to be passed to other hypotheses, Cortes said. PFS was assessed using a hierarchical strategy, and the final PFS assessment was performed at a second interim analysis, with a data cutoff date of December 11, 2019.

"We should take into account that the sample size was very [small], the trial was not designed to look at this subgroup, and we had widely overlapping confidence intervals," Cortes noted with regard to these data.