Erika P. Hamilton, MD, discussed several studies in the HER2-positive breast cancer space and the sequencing challenges that have emerged.

“We have a lot of options for HER2-positive breast cancer now,” said Hamilton. “It's very interesting that some of our options that we have historically used for metastatic disease, such as pertuzumab (Perjeta) in the first-line setting and ado-trastuzumab emtansine (T-DM1; Kadcyla) in the second-line setting, are being pulled up into the neoadjuvant and adjuvant settings.”

For example, initial findings from the phase III KATHERINE trial showed a 50% reduction in the risk of invasive disease recurrence or death with the use of adjuvant T-DM1 in patients with residual HER2-positive early breast cancer after neoadjuvant trastuzumab (Herceptin) and chemotherapy (HR, 0.50; 95% CI, 0.39-0.64; P <.0001).1 These data led to the approval of T-DM1 for this patient population. It was initially approved by the FDA for the treatment of patients with metastatic HER2-positive breast cancer who previously received trastuzumab and a taxane, either alone or in combination.

Moreover, she adds, a handful of novel therapies continue to be investigated in the metastatic setting.

“It's really a free-for-all and we have a lot of new agents. [I’m interested] to see how we end up sequencing those in the metastatic setting,” Hamilton added. “As some of our agents get used earlier, novel agents for [metastatic] HER2-positive disease is a big need.”

The phase III NALA trial, which looked at HER2-positive breast cancer in the metastatic setting, showed a 24% reduction in the risk of progression or death with the combination of neratinib (Nerlynx) and capecitabine (Xeloda) versus lapatinib (Tykerb) and capecitabine in patients who had received ≥2 prior lines of HER2-targeted therapy (HR, 0.76; 95% CI, 0.63-0.93; log-rank P value = .0059).2 These data resulted in a supplemental new drug application submitted to the FDA in July 2019. Additionally, the FDA granted an orphan drug designation to neratinib for patients with breast cancer that has metastasized to the brain.

In an interview during the 2019 OncLive® State of the Science Summit™ on Breast Cancer, Hamilton, the director of the Breast Cancer Program at Sarah Cannon Research Institute, discussed several studies in the HER2-positive breast cancer space and the sequencing challenges that have emerged.

OncLive: What was the significance of the KATHERINE trial data?

Hamilton: KATHERINE was a trial that took patients who had neoadjuvant chemotherapy and did not have a pathologic complete response—meaning patients still had cancer left at the time of surgery. They either received their completion year of trastuzumab or T-DM1 for 1 year.

We saw was an 11% improvement in disease-free survival [with T-DM1]. This is a much higher benefit than we have seen with some other drugs, such as neratinib or pertuzumab in the adjuvant setting. T-DM1 is certainly a great drug, but if we give our chemotherapy in a neoadjuvant fashion, we can pick out that very high-risk population that would benefit from additional therapy. Other trials usually pick out high-risk population—maybe based on size, initial diagnosis, or nodal status—but a lot of those patients respond well to the treatment we give them and probably convert themselves into a good prognosis.

Could you highlight the findings of the ExteNET trial of neratinib in the adjuvant setting?

ExteNET was a study with adjuvant neratinib, and we found that there was a benefit in all-comers. However, that benefit was really driven by the patients who were both hormone receptor—positive and HER2-positive. [Neratinib] is an option to continue after the 1 year of adjuvant trastuzumab.

Moving onto metastatic disease, what activity was seen with neratinib in the NALA trial?

NALA comprises relatively recent data that combines capecitabine with neratinib. It was a great trial with good progression-free survival (PFS). A lot of us are very excited about neratinib because it crosses into the brain as well, which makes it good for patients who have brain metastases. In HER2-positive breast cancer, a little less than 50% of our patients will ultimately develop brain metastases. We're seeing this increase as [overall] treatment gets better and these women are living longer with metastatic disease. Unfortunately, the brain is a sanctuary site and many patients develop brain metastases.

Margetuximab is another agent being studied in metastatic disease. Could you highlight the data that have been reported thus far?

This margin of benefit was even a little bit greater for those who had a CD16A-F allele, allowing us to predict who might get more benefit from that. There was a press release recently about margetuximab, which stated that there is now an improved median overall survival (OS) by about 1.9 months for the all comers and almost 4.5 months’ improvement of OS for patients with a certain CD16 allele, which represents about 85% of the population.

How is tucatinib currently being explored in breast cancer?

Tucatinib is a drug that I have worked with for a long time—since 2014—in our phase I unit. It's a special drug in the fact that it's an oral TKI, not unlike capecitabine or lapatinib. What's unique about [tucatinib] is that it's only a blocker of HER2, meaning it doesn't block EGFR or HER1. A lot of times our adverse events of rash and diarrhea, that we see with neratinib and lapatinib, come from that EGFR blockade. Tucatinib, on the other hand, tends to be very attractive from a tolerability standpoint.

With the emergence of all of these new therapies, how do you determine sequencing for each patient?

That is an interesting question and I don't know that there's one right answer right now. Historically, taxane with trastuzumab and pertuzumab has been our first-line metastatic regimen. T-DM1 has been our second-line standard and third-line treatment has really been up in the air. We have capecitabine and lapatinib. Margetuximab and trastuzumab deruxtecan (DS-8201) are [on their way to being approved]. Additionally, capecitabine in combination with tucatinib is [likely going to be approved].

There are a lot of agents and exactly how those all settle out remains to be determined and will probably will be individualized on a case-by-case basis. All of these agents are going to get play as more people receive pertuzumab and T-DM1 in the neoadjuvant and adjuvant settings. We may not recycle those drugs in the metastatic setting, depending how long it has been since patients received them last.

Dr. Pegram on Considerations for Treatment Selection in HER2+ Breast Cancer 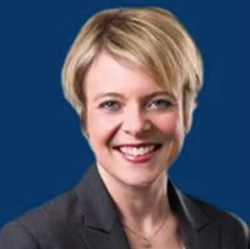