Edward Messing, MD, discusses how treatment with gemcitabine following transurethral resection of bladder tumors reduced the risk of recurrence by 34% in patients with non-muscle invasive disease. 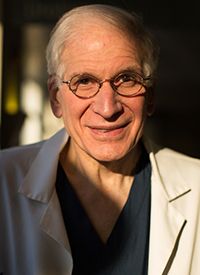 Administering chemotherapy after transurethral resection of bladder tumor (TURBT) reduces the risk of recurrence, according to a paper presented at the American Urological Association’s 2017 Annual Meeting by lead author Edward Messing, MD.

A study was conducted in patients with low-grade non-muscle invasive disease to evaluate the impact of one installation of gemcitabine (2 gm plus 100 ml of saline) versus saline alone (100 ml). After TURBT, 406 eligible patients were followed quarterly with cystoscopies over 2 years, then semiannually for 2 years. The primary endpoint was time to recurrence.

Results showed that there was a 34% reduction in the risk of recurrence in the gemcitabine arm compared to saline alone (HR, 0.66; 95% CI, 0.48-0.90; P = .010). Very few muscle invasive events or deaths occurred in the patient population, and there were no grade 3 adverse events.

This procedure has been done with mitomycin in Canada and Europe for over 20 years, Messing says, but the availability and pricing of this chemotherapy drug has hindered it from being adopted across the United States. By using gemcitabine, a cheaper and more widely available alternative, Messing believes this procedure will become the standard of care.

In an interview with OncLive, Messing, professor and chairman of Urology, professor of Oncology at the University of Rochester, discussed his paper and the potential of post-TURBT gemcitabine becoming the standard of care.

OncLive: Please provide some background on the rationale for this study.

Messing: This is a treatment for bladder cancer, the second most common urologic malignancy—there will be almost 80,000 new cases this year in the United States. At least half of these are low-grade, non-muscle invading bladder cancers, and they recur frequently, but they do not usually become more invasive or life threatening.

It has been known for 25 years that if you scrape the tumors out in an operation called TURBT, which is done through a cystoscope, and then you put in chemotherapy afterwards, you can reduce the likelihood of these tumors recurring. These are part of guidelines around the world, but no one in the United States is doing this. And really none of the big studies have never been done in America.

The most commonly used agent, mitomycin, which is a chemotherapy drug, has been fraught with problems, such as drug availability, and it is quite expensive. Because of the peculiarities of how Medicare works, the drug is more expensive than Medicare approves, so whoever dispenses it loses dollars each time. So, when I give it to a patient in Rochester, New York, we pay $250. It makes no sense, but that is the way it is. It is also fairly toxic, it is usually tolerated okay, but there is a definite high incidence of scarring and calcifications forming in the bladder and if it leaves the bladder, it can cause tremendous scarring outside of it. So, for those reasons, it has not been used widely in the United States.

What was the design of this study?

We wrote a paper about that a decade ago. We thought maybe we could try gemcitabine, which is used frequently for metastatic bladder cancer and locally advanced aggressive bladder cancer, systemically as an IV drug. We did a study with 406 eligible patients, randomized to receive gemcitabine at 2 gm and 100 cc of saline or 100 cc of saline alone and then were followed for 4 years. Recurrence had to be diagnosed by a biopsy—it had to actually be a positive histology.

The intent-to-treat group, which included all comers, included some people that actually had more aggressive bladder cancer and also, the study drug was never given to about 15% of the patients, due to the extent or depth of the scrape-out. In this group, gemcitabine reduced the risk of recurrence by about 34%, and in the group that we really wanted to get—newly diagnosed or occasionally recurrent low-grade bladder cancers&mdash;it reduced the chance of recurrence by 47%, which is pretty dramatic drop.

It is something that is easy to do; the drug is available and it is very well tolerated. There was no difference in risk—no life-threatening or lethal events and very few serious events. The patients did much better with gemcitabine than with saline, and it was a very safe and easy drug to give. And, it is readily available…So, we think it should become the standard of care for treating these patients, which represent about half of the people who get bladder cancer.

We have not done the cost analysis yet, but we are going to do it and it will significantly reduce overall costs of treating bladder cancer, which is important, since bladder cancer is the most expensive to treat cancer over the lifetime of a patient.

How do you think this paper will be interpreted by urologists and community oncologists?

I think that the paper will say that the competitor, mitomycin, is fraught with availability issues, it is very expensive, and that it is more toxic. This was not a head-to-head study—mitomycin, in any of the studies published, has never been this effective. You can’t compare the outcomes of one study versus another, but you can say that gemcitabine is a clearly available product, and mitomycin isn’t, from a practical point of view. I think that if they read the paper, they will say, “Yes, this is what we should do.”

I think that everyone wants to do something, and the competitor methodology, called fluorescent cystoscopy, or narrow-band imaging—which has nothing to do with putting medicine in the bladder, it allows you to see more tumors and destroy them&mdash;is also used by almost no one in the country. So, you are left with something that people aren’t doing but will hopefully get in the habit of doing it because it is safe and easy to do.

Is there anything else that you would really like to highlight about this study?

Well I am not on that panel, but I think that once the paper is published, it will be clear that this is worth doing, and safe and easy to do. I think it will be in the updated guidelines the next time the AUA does a guideline. Hopefully this year or next year.

I think, and everyone at SWOG thinks, this is what people should be doing. Skipping my bias, once I knew the statistics of the study about 6 months ago, it is without question better than its competitors and should be done. You can’t look someone in the eye and say that you could reduce the risk of their tumor recurring by almost half and not do it.

SWOG is going to do other studies, but this is going to be the standard and we may then add additional treatments.