Precision Medicine: The Next Paradigm Shift in MCL

The field of lymphoma has undergone a dramatic paradigm shift from the use of chemotherapy to targeted therapy to immunotherapy, and now, to cellular therapy, said Michael Wang, MD, who added that the future landscape will be driven by precision medicine in which mechanisms of resistance are well understood, particularly in aggressive subtypes, such as mantle cell lymphoma (MCL).

"In a few years, we will see that the cellular therapies can only cure about one-third to half of patients. I believe we’re going to welcome the precision medicine multi-omics era where we’ll use technology, such as RNA-Seq, DNA-Seq, protein-omics, epigenetic sequencing, and biological studies to determine resistance mechanisms in each tumor," said Wang.

In an interview with OncLive, Wang, professor in the Department of Lymphoma and Myeloma at The University of Texas MD Anderson Cancer Center, discussed these paradigm shifts in lymphomas and the research efforts driving precision medicine in MCL.

OncLive: Could you discuss the evolution of therapy in lymphoma?

Wang: I’ve been working at The University of Texas MD Anderson Cancer Center for 20 years, and during this time I have witnessed therapies in lymphoma evolve from chemotherapy, to targeted therapy, to chemotherapy-free therapy. Now, we’re using CAR T-cell therapy.

Chemotherapy, as we know, is very toxic. Chemotherapy attacks every cell in the body, not only the lymphoma cells. Chemotherapy has dramatic short-term and long-term consequences. In the short-term, chemotherapy [leads to] bone marrow suppression and low cell counts. Patients can get infections, bleed, and require constant transfusions. In the long-term, patients can develop a secondary malignancy after about 7 to 10 [years] or even longer after completing chemotherapy. Treatment-related secondary malignancies are universally and rapidly lethal [in oncology].

In order to reduce toxicity, we use targeted therapies. For example, [we can use] ibrutinib (Imbruvica), which [binds to] BTK in the cytostome in the B-cell receptor pathway. This single oral pill is able to induce better responses than combination chemotherapy with 5 drugs. We don’t need to use a catheter [to deliver the treatment] and the patient’s blood counts barely decrease. The patient doesn’t have to go to the hospital.

These treatments are not curative for all patients, particularly those with MCL which we know is an aggressive subtype of lymphoma. Could you shed light on the importance of investigating mechanisms of resistance to these therapies?

Some patients will relapse after chemotherapy, targeted therapy, and immunotherapy. Patients are in remission for 1 to 2 years, after which [the disease will] inevitably come back. What are we going to use in a patient who has many mutated genes and has a [depleted] immune system?

No matter what we use for high-risk patients, be it chemotherapy, targeted therapy, or immunotherapy, patients continue to relapse. We’re not curing the majority of patients. Now, we’re using cellular therapies, such as CAR T-cell therapies, CAR natural killer cell therapies. We have shown that in these very refractory tumors that are resistant to chemotherapy, targeted therapy, and immunotherapy, we can rescue a subset of patients. Some of these patients may even achieve long-term remissions and potential cure.

Therapy in lymphoma has migrated from chemotherapy to targeted therapy to immunotherapy, and now we’re in the cellular therapy era. If patients stop responding to these therapies, we’ll be able to use science and technology to determine the Achilles heel of the tumor, so that we can attack it with precision and [save] patients.

MCL is a very distinct subtype of B-cell lymphoma. Many patients with MCL are rapid progressors. Ibrutinib [is approved. I led that effort] in an international clinical trial, [and conducted research with] acalabrutinib (Calquence), and venetoclax (Venclexta). Venetoclax is a BCL-2 inhibitor. [At The University of Texas MD Anderson Cancer Center], we looked at patients who initially responded to venetoclax and ibrutinib and then became resistant to these agents. [This research will bring us one step closer] to precision medicine and help us [shed light on] the genes [that are responsible for acquired resistance to these drugs, which we may be able to target in the future]. 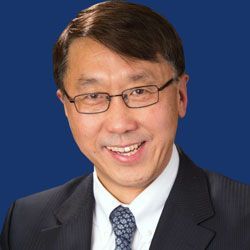