Bone metastases in metastatic castration-resistant prostate cancer can invade a range of sites in the skeleton where they precipitate a spectrum of pathological processes that increase morbidity, negatively affect quality of life, and decrease survival.

Bone metastases in metastatic castration-resistant prostate cancer (mCRPC) can invade a range of sites in the skeleton where they precipitate a spectrum of pathological processes that increase morbidity, negatively affect quality of life, and decrease survival. Not surprisingly, new treatments and treatment paradigms are being developed aimed at reducing the incidence of these events.1

A recent review summarized the pathophysiology of bone pain as, “components of neuropathic, inflammatory and ischemic pain, arising from ectopic sprouting and sensitization of primary afferent sensory nerve fibers within prostate cancer-invaded bones.” It further asserted that metastases arises and is perpetuated by virtue of the cross talk between the osteoclasts and osteoblasts and other factors involved in the bone microenvironment. 5 This multifactorial pathophysiology makes it challenging to manage and an imperative to avoid.1

A recent preclinical study has highlighted an unreported mechanism that promotes the growth of bone metastases in prostate cancer.7 Using a mouse model they showed that following injection of prostate cancer cells into the intramedullary cavity of the tibia, tumor growth increased pressure within the mouse tibia. In vitro experiments subsequently revealed that pressure applied to osteocytes facilitated prostate cancer growth and invasion, and this was mediated in part by an upregulation of CLL5 and matrix metalloproteinases in osteocytes.

Impact of Bone Pain on Survival and Quality of Life

These findings implicate osteocytes, responding to the increased pressure generated by tumor growth, in the orchestration of the metastatic niche within the bone in patients with prostate cancer.7 This again emphasizes the clinical imperative to reduce the incidence of bone metastases in prostate cancer.Several studies have assessed the impact of bone pain on survival and quality of life. A retrospective analysis examined 599 patients from three randomized controlled trials conducted from 1992 to 1998.8 Patients in this analysis had progressive CRPC adenocarcinoma of the prostate and an ECOG performance status of 0 to 2. The Brief Pain Inventory (validated scale) gauged the impact of pain on selected daily activities and quality of life (QOL).

They found a median pain interference score of 17, and a statistically significant association between pain scores and the risk of death. Comparing men with low (<17) and high (≥17) pain scores, respectively, the median survival times were 17.6 versus 10.2 months (P <.001). When comparing the same two cohorts, median times to bone progression were 6.7 months and 3.8 months, respectively (P <.001).

Additionally, a study from 2002,9 found that skeletal-related events (SREs) have clinically meaningful and significant impact on health-related QOL, with physical, emotional, and functional wellbeing all declining after pathologic fractures and radiation therapy. Significant declines in preference and utility scores were noted after fractures and radiation. Pain intensity only declined after radiation treatment, but not after other SREs.

Moreover, another study identified an association between skeletal morbidities and patient reported outcomes and survival.10,11 The trial recruited 643 patients, and they received either zoledronic acid or placebo for 15 months. Patients with no SREs at 6 months (landmark) had significantly greater survival at 360 days post landmark (49.7% vs 28.2%; P = .02).

Health-related QOL measures in the post landmark period, including pain, were worse in patients who experienced SREs during the landmark period.There are currently a number of treatments that are approved for the management of patients with mCRPC and bone metastases. They include osteoclasttargeting agents, zoledronic acid and denosumab, and radiopharmaceuticals such as ß-particle emitters, strontium-89 chloride and samarium Sm-153 lexidronam, and the α-particle emitter radium-223 (Xofigo).1A phase III trial of zoledronic acid (a bisphosphonate) versus placebo in 643 patients with mCRPC and bone metastases, without severe bone pain, showed that fewer patients taking zoledronic acid dosed at 4 mg every 3 weeks for 15 months experienced SREs versus placebo (33% vs 44% P = .021); however, survival was not significantly different between the groups. At 24 months of follow-up, zoledronic acid treatment reduced the risk of SREs by 36% versus placebo. Bone pain was also reduced in patients treated with zoledronic acid compared with placebo.1,10

A phase III trial was conducted on denosumab (a monoclonal antibody against a key activator of osteoclastic resorption, RANKL) versus zoledronic acid (Table 1).12 The primary endpoint was time to first on-study SRE. Overall survival (OS) and investigator-assessed overall disease progression and PSA levels during the study were among key exploratory endpoints.

The study recruited patients with mCRPC and bone metastases who had no prior treatment with bisphosphonates. A total of 1904 patients were randomized, 950 to denosumab and 951 to zoledronic acid. The median time to the first SRE was 20.7 versus 17.1 months for denosumab and zoledronic acid, respectively (HR, 0.82; 95% CI, 0.71-0.95; P = .008). OS and investigator reported disease progression were not significantly different between the groups. Changes in median PSA concentrations and bone pain were also similar between the groups during the study.12 There are a number of toxicity concerns associated with these agents. Nephrotoxicity is a commonly reported adverse event (AE) for bisphosphonates, necessitating monitoring of serum creatinine and appropriate dose adjustment. Denosumab, however, does not cause nephrotoxicity in men with prostate cancer.1

An integrated analysis of three randomized phase III trials (5723 patients) confirmed that both drugs are associated with hypocalcemia and osteonecrosis of the jaw (ONJ).13 Hypocalcemia incidence was higher among patients treated with denosumab versus zoledronic acid (3.1% vs 1.3% for grade 3/4). ONJ was found to occur more frequently in patients treated with denosumab than zoledronic acid (1.8% vs 1.3%), but the difference was not statistically significant.13The status of ß-particle emitters strontium-89 chloride and samarium Sm-153 lexidronam has recently been reviewed by Body et al.1 Considering the evidence, they conclude that although both agents seem to exert clinically relevant analgesic effects in patients with bone pain in mCRPC, they have not been unequivocally shown to reduce the incidence of SREs or to extend survival.1

The toxicities associated with these agents are largely hematological, with marrow toxicity being the major side effect of samarium Sm-153 lexidronam. A temporary increase in bone pain during early treatment occurs in 15% of patients treated with strontium- 89 chloride.1

The data for the α-particle emitter radium-223, which selectively binds to areas of increased bone turnover in bone metastases, that secured its approval came from the pivotal phase III ALSYMPCA trial (Table 2).14

The study randomized 921 patients in a 2:1 fashion to receive six injections of radium-223 or placebo, one injection given every 4 weeks. The primary endpoint was OS. Secondary endpoints included time to first SRE and biochemical endpoints. The efficacy analysis measured radium-223 survival benefit versus placebo seen at an interim analysis.

Safety profiles were similar between the treatment arms. One patient experienced grade 3 febrile neutropenia in each group. There was one grade 5 hematological event (thrombocytopenia) in the radium-223 group considered possibly related to the study drug. The incidence of bone pain was reduced in patients treated with radium-223 versus placebo (10% vs 16%).

Significantly more patients in the radium-223 group versus placebo experienced a meaningful improvement in QOL as determined by the Functional Assessment of Cancer Therapy-Prostate score (25 % vs 16%; P = .02).14Newly approved therapies appear to provide the greatest benefits to patients with asymptomatic metastatic prostate cancer, suggesting that earlier detection of metastases is essential to improving care.15-19 A leading question facing the early detection of bone metastases is whether scans should be triggered by a biochemical event or conducted at a fixed interval.

In a study published in 2014, using the SEARCH database, PSA levels, PSA doubling time, and PSA velocity were predictors of metastases in patients with increasing PSA levels after radical prostatectomy.15 In the study, data were analyzed from 401 patients undergoing a bone scan for suspected metastatic disease from 1995 to 2012 at six Veteran Affairs Medical Centers.

All patients had bone scans, and their PSA levels and PSA kinetics at the time of scan were available. The secondary objective of the study was to use PSA and PSA doubling time (PSA-DT) to rank bone scans according to positivity.

In the study, in patients who were hormone therapy naïve, screening for bone metastases should be initiated for a PSA-DT of <9 months. In contrast, there was only a 2% risk of a positive bone scan if the PSA-DT was ≥9 months. A longer PSA-DT was still associated with a very low risk of a positive scan, even in men with high PSA values.

In men after androgen deprivation therapy (ADT), they could not identify a subgroup where the risk of a positive bone scan was low. Even among patients with very low PSA and PSA-DT, the risk of a positive bone scan was ≥10%, and the authors recommended that bone scans should begin early in patients after ADT, even before a PSA level of 5 ng/mL was reached.15 In a more recent analysis, again using the SEARCH database, they devised a tool to assist physicians in the selection of patients with CRPC who may be in need of bone scans. The table combines PSA and PSA-DT, and stratifies patients according to the risk of having a bone scan. They also point out that the table could be used for the identification of particular populations of patients for specific clinical trials (Table 3). 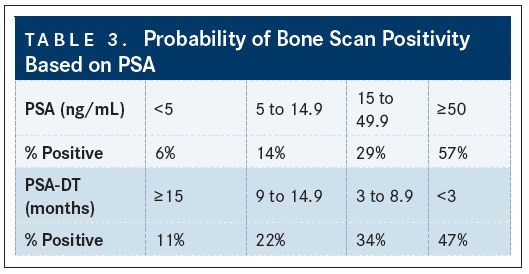 This analysis found that men with a PSA of <5, 5 to 14.9, 15 to 49.9, and ≥50 ng/mL had scan positivity of 6%, 14%, 29%, and 57%, respectively (P trend <.001). Scan positivity was 11%, 22%, 34%, and 47% for men with PSADT ≥15, 9 to 14.9, 3 to 8.9, and >3 months, respectively (P trend <.001).16Considering prostate cancer in general, the extent of the disease dictates the best timing and sequencing of treatments in addition to patient-specific factors. These include the site and extent of disease, speed of progression, symptoms experienced, comorbidities, availability of particular treatments, and contraindications of therapeutic agents/procedures.20 With novel bone-directed therapies available, trials are currently assessing the best use of these therapies in combination.