Mohamad Allaf, MD, discusses innovative and unique aspects of the PROSPER-RCC trial design, areas for continued analysis within the study, and the ways in which this trial will inspire and inform continued research in renal cell carcinoma. 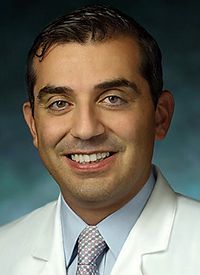 Despite its negative results, continued analysis of the phase 3 PROSPER-RCC trial (NCT03055013) evaluating perioperative nivolumab (Opdivo) in patients with renal cell carcinoma (RCC) can still greatly inform future research decisions and sustain interest in expanding the use of immunotherapy for this patient population to improve long-term outcomes, according to Mohamad Allaf, MD.

Data from the open-label study, which were presented at the 2022 ESMO Congress, showed that nivolumab plus nephrectomy followed by standard postoperative follow-up did not significantly improve recurrence-free survival (RFS) compared with surgery alone at a median 16-month follow-up (HR, 0.97; 95% CI, 0.74%-1.28%; 1-sided P = 0.43). Though overall survival data were not fully mature at the time of follow-up analysis, patients in the treatment arm did not show improved OS compared with those on the observation arm (HR, 1.48; 95% CI, 0.89%-2.48%; 1-sided P = 0.93).

“This is a very unique trial in this space, given its progressive design, the involvement of a neoadjuvant component, and other features,” said Allaf, urologist-in-chief and professor of urology at Johns Hopkins University, Baltimore, Maryland. “Ongoing radiometric, pathomic and other biomarker analyses within this trial may inform the design of future neoadjuvant renal cell trials, and also shed some light on the [negative] result.”

In an interview with OncLive, Allaf expanded on innovative and unique aspects of the PROSPER-RCC trial design, areas for continued analysis within the study, and the ways in which this trial will inspire and inform continued research in RCC.

OncLive: What was the rationale for evaluating nivolumab in patients with localized kidney cancer undergoing nephrectomy in the phase 3 PROSPER-RCC trial?

Allaf: The phase 3 PROSPER-RCC trial, also known as ECOG-ACRIN EA8143, was a randomized trial of perioperative nivolumab vs standard-of-care [SOC] observation in patients with resectable RCC who are at risk for recurrence.

Given the success of systemic nivolumab in improving RFS and OS in patients with metastatic kidney cancer, there's tremendous enthusiasm for expanding the use of immunotherapy to those with earlier-stage disease, who are at risk for recurrence. Administering immunotherapy in the neoadjuvant preoperative setting is [also] biologically sound. Preclinical studies have shown a strong and broad immune response that can be generated if immunotherapy is given while the primary tumor is still in place with draining lymph nodes. There are also preclinical data showing better survival in animal models with neoadjuvant therapy.

[Additionally,] neoadjuvant PD-1–based therapy has led to improved outcomes in clinical trials in other disease spaces. Work from my institution, Johns Hopkins, showed an impressive pathologic response and improved outcomes in [patients with] non–small cell lung cancer, leading to the FDA approval of neoadjuvant nivolumab in that disease space. [Although] this information [is promising], we also acknowledge that neoadjuvant therapy alone may not be enough to affect outcomes.

Please expand on the unique neoadjuvant/adjuvant design of this trial.

This is a unique trial in this space, given its progressive design. The treatment arm involved [both] neoadjuvant and adjuvant components. We [administered] neoadjuvant nivolumab followed by surgery in the treatment arm, followed by 9 months of adjuvant therapy. The idea [behind this was] to prime the immune system with the neoadjuvant component and continue engagement of the immune system by maximizing exposure after surgery.

In addition to the unique neoadjuvant/adjuvant design, we're proud that this trial design was aided tremendously by patient advocates. [Because] it is an open-label trial, there was no placebo in the control arm, [which] was strictly surgery followed by SOC observation. Given that we were going to administer neoadjuvant therapy, we mandated a biopsy in the treatment arm. However, patients with a non-diagnostic biopsy were still enrolled, as we considered that a good faith effort. We also included patients who had low-volume M1 disease as long as they were to be rendered disease-free within 12 weeks of enrollment.

What were the key findings?

[Results showed that] a neoadjuvant dose of perioperative nivolumab followed by 9 doses of adjuvant nivolumab did not improve RFS in patients with resected RCC at risk for recurrence. [Furthermore,] adverse events in the trial were consistent with toxicity profiles in other nivolumab monotherapy trials.

We enrolled more than 800 patients and had set 3 futility analyses based on the amount of follow-up events [collected]. These [follow-up events included] counts of recurrences and deaths. The efficacy analysis results were presented to the Data Safety and Monitoring Board, [who] recommended that we release the results for futility. At that time, the hazard ratio [exceeded] 0.96. Unfortunately, the trial did not meet its primary endpoint of RFS, and the [Kaplan-Meier] curves remain similar throughout the course at a median follow-up of 16 months.

Although the data were negative, are there any findings that warrant additional analysis?

We have a lot of data involving quality of life, which was a secondary endpoint [of the study]. [This is] because we can look for biomarkers and other important factors in tissue that had neoadjuvant treatment. [Moreover], about 20% of patients in the trial had non-clear cell RCC. [Lastly,] the OS data from this trial is immature at this point in time, so we can't [draw definitive] conclusions regarding OS.

How can these results inform future research decisions in this space?

When looking at the results of the study, great caution needs to be exercised in [drawing] conclusions regarding the efficacy of a neoadjuvant strategy. This trial is the first of its kind; we have patients who received the neoadjuvant dose, [followed by] surgery and then the adjuvant component. [Those of us in] the study team are still [conducting] subset analyses to understand why the overall result was negative.

As a urologist, one of the biggest wins from this trial is that it required an unusually significant partnership between medical oncology and urology. This collaboration also [allowed us to] include a biopsy component, [which many claim] takes weeks and months to organize. [Yet] our interventional radiology colleagues delivered, and we were able to do a trial that enrolled patients in this disease stage. This reaffirms that we can do these trials.

[Additionally,] understanding the effect of the open-label design on [study outcomes], and the effect of not having a placebo, [can help us find areas of] improvement in such trial designs.

What ongoing research in RCC do you find intriguing?

There is a lot of exciting work being done at the intersection of urology and medical oncology. Meetings like ESMO are great places for urologists to learn, [not only] from what's being done in the advanced setting, but also from what's being done in the earlier stages. [These studies can provide] insights on [how] urologists can design better trials in the earlier stage and participate in them in a meaningful way to help our patients.