Peter Voorhees, MD, discusses key points from his presentation on proteasome inhibitors in multiple myeloma and positive data with the agents in the transplant-eligible and transplant-ineligible populations. 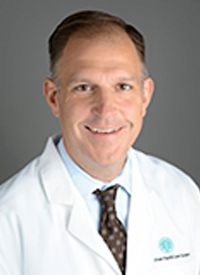 In an interview with OncLive®, Voorhees, the director of outreach for hematologic malignancies in the Plasma Cells Disorder Program in the Department of Hematologic Oncology and Blood Disorders at Atrium Health Levine Cancer Institute in Charlotte, North Carolina, discussed key points from his presentation on PIs in multiple myeloma. He noted positive data with PIs in the transplant-eligible and transplant-ineligible populations and the potential role of the CD38 mAbs daratumumab (Darzalex) and isatuximab-irfc (Sarclisa) in this arena.

OncLive®: What are some of the most important treatment developments with PIs in this area?

Voorhees: I touched on a number of different aspects regarding PI-based therapy in multiple myeloma. In the up-front setting, especially for transplant-eligible patients, the core of the PI [story is that] bortezomib with lenalidomide [Revlimid] and dexamethasone [RVd] is a standard of care [SOC].

The transplant-ineligible scenario is an evolving field. RVd is certainly an important SOC in transplant-ineligible patients, based on the [phase 3] SWOG S0777 trial [NCT00644228], which demonstrated that the addition of bortezomib to the lenalidomide plus dexamethasone backbone improved depth of response and translated into improved PFS and overall survival [OS].

Two studies have shown this. [The phase 3 CLARION study (NCT01818752)] in the non–transplant eligible patient population looked at melphalan, prednisone, and bortezomib vs melphalan, bortezomib, and carfilzomib. That study showed no difference regarding overall response, PFS, or OS.

More recently, the [phase 3] ENDURANCE trial [NCT01863550] was an ECOG-led study that looked at RVd vs [carfilzomib plus lenalidomide and dexamethasone] for patients not intending to undergo an up-front transplant. Similarly, in that study, there was no difference regarding depth of response, PFS, or OS. Not surprisingly, there were differences regarding adverse effects, with more neuropathy in the bortezomib-containing arm and more vascular-type effects, such as cardiac [effects], renal toxicity, and hypertension, in the carfilzomib arm.

We’re starting to see some neat CD38 antibody Kd platforms in early relapsed disease. The [phase 3] CANDOR trial [NCT03158688] looked at Kd with or without daratumumab in early relapsed multiple myeloma. Not surprisingly, the addition of daratumumab to the Kd backbone improved depth of response, PFS, and OS.

The [phase 3] IKEMA trial [NCT03275285] looked at the other CD38 antibody, isatuximab, in combination with Kd in early relapsed disease. There, too, [the combination] showed improved depth of response, as well as a median PFS that’s not been seen before in the relapsed space with a PI-based triplet.

I also briefly touched on the question of: Now that CD38 antibodies are being increasingly used in the up-front setting, how does that translate into optimal therapy in early relapsed disease? If you have a patient who’s treated per the [phase 3] MAIA trial [NCT02252172], they’re on daratumumab, lenalidomide, and dexamethasone until disease progression, at which point they have CD38 antibody– and lenalidomide-refractory disease at first relapse. A couple of phase 3 studies that have pointed to different PI-based triplets that might be appropriate in that specific clinical scenario. The [phase 3] OPTIMISMM trial [NCT02252172] looked at the addition of pomalidomide [Pomalyst] to the bortezomib/dexamethasone backbone in early relapsed myeloma and showed an improvement in depth of response and PFS. The [phase 3] BOSTON trial [NCT03110562] looked at the addition of the export inhibitor selinexor [Xpovio] to the bortezomib/dexamethasone backbone, and again, there was an improvement in PFS with that triplet.

How would you summarize the main points of your presentation?

The MAIA trial looking at daratumumab with lenalidomide and dexamethasone produced the longest PFS that we’ve ever seen in a non-transplant study in the newly diagnosed population. We’re hopeful that the addition of daratumumab to the RVd backbone in the transplant-eligible patients will further extend that PFS.

Importantly, as we develop all these new therapeutics in the relapsed/refractory setting, we’re increasingly seeing that as we bring them to the newly diagnosed populations, we continue to improve outcomes for our patients.