Residual cancer burden after neoadjuvant chemotherapy has been shown to be an accurate long-term predictor of disease recurrence and survival across all breast cancer subtypes. 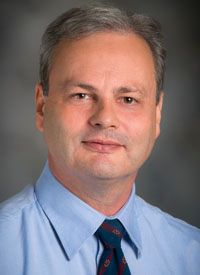 W. Fraser Symmans, MD, a professor and director of research operations in the Department of Pathology at The University of Texas MD Anderson Cancer Center

Residual cancer burden (RCB) after neoadjuvant chemotherapy has been shown to be an accurate long-term predictor of disease recurrence and survival across all breast cancer subtypes, according to data from a large meta-analysis presented at the 2019 San Antonio Breast Cancer Symposium.1

Several studies have demonstrated independent validation of the prognostic relevance of RCB post-neoadjuvant chemotherapy. The large, multicenter, pooled meta-analysis was done to determine estimates of long-term prognosis for each class of RCB across breast cancer subtypes to better inform patient outcomes.

RCB is evaluated through multiple factors, including primary tumor size, percentage of the tumor that is invasive versus in situ, and lymph node involvement, said W. Fraser Symmans, MD, a professor and director of research operations in the Department of Pathology at The University of Texas MD Anderson Cancer Center, in a press conference during the meeting.

An RBC calculator, hosted by The University of Texas MD Anderson Cancer Center, computes an RBC index and allocates a classification of pathologic complete response (pCR), with 0 equating to a pCR. That is then categorized into 1 of the following 3 classes: RCB-I (minimal burden), RCB-II (moderate burden), and RCB-III (extensive burden).

"The basic principle is that we estimate the area that still contains residual disease, map that area to the slides that we’ll be looking at under the microscope, and create an image so that we can reconstruct it and be able to determine what area still contains actual cancer," explained Symmans.

"Then, we combine that with the fraction of that area that still contains invasive cancer cells, as well as the number of positive lymph nodes and the size of the largest metastasis," he added. "This is just organizing what we would otherwise report in pathology, but we’re doing it in a quantitative and standardized manner."

For the analysis, investigators from the I-SPY Clinical Trials Consortium collected and reviewed subject-level RCB data, with relevant clinical and pathologic stage, tumor subtype and grade, demographic, treatment, and follow-up findings from a total of 12 institutions or clinical trials, encompassing a little over 5100 patients.

Using mixed effect Cox models, the relationship between the continuous RCB index and event-free survival (EFS) as well as distant relapse-free survival (DRFS) was evaluated; random RCB coefficients were incorporated to account for between-study heterogeneity. Furthermore, a multivariate analysis adjusted for age, T-category, nodal status, and grade was done within each breast cancer subtype. Results demonstrated that RCB index was tightly associated with both EFS and DRFS; this finding was consistent across 12 clinical sites and all 4 breast cancer subtypes, which included the following: hormone receptor (HR)—negative/HER2-negative, and HR-negative/HER2-positive, HR-positive/HER2-positive, and HR-positive/HER2-negative.

"The 20% of patients [in the] RCB-II and RCB-III [groups are estimated to] have a significantly worse survival than the rest,” said Symmans. “Although this is a small quantile of patients, they still have really substantial risk."

“In the HR-positive/HER2-negative breast cancer group, where there is still a bit of confusion about whether or not chemotherapy can help patients with this type of disease, we see that the extent of residual disease is strongly prognostic,” stressed Symmans.

"Here, you can see that there’s clearly an effect on prognosis from the chemotherapy," said Symmans. "However, the most prognostic aspects of the distribution of response [is] when there’s the most residual disease—the RCB-III and RCB-II [groups]. That’s a long-term risk that’s still continuing beyond 10 years."

"The most important conclusion is that there is a strong potential to calibrate an individual's RCB index score to her residual prognostic risk," said Symmans. "There is a generally linear relationship between RCB index value and the log of risk, and it is entirely feasible to have phenotype-specific calibration risk curves for use in the communication of risk and the interpretation of clinical trials."

One study limitation was that it included data from several institutions, and as such, there was some variation with regard to the clinical methods used, the handling of specimens, and other potential factors. Furthermore, some RCB data were collected prospectively and some were collected retrospectively.

"Looking ahead, if we can standardize the reporting of residual cancer burden, that will only improve its usefulness in determining long-term prognosis," concluded Symmans.2