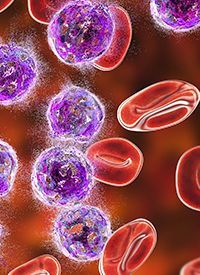 Resistance to CD19-directed CAR T-cell therapy was associated with molecular characteristics identified in pediatric patients with acute lymphoblastic leukemia (ALL), according to findings presented at the 2022 AACR Annual Meeting.1

Investigators observed 3 key features of leukemia cells that do not respond to CAR T-cell therapy: hypermethylation of DNA, a stem cell-like phenotype and inherent plasticity, and decreased antigen presentation. These are independent of CD19 status and leukemia subtype, indicating a new predictive biomarker.

“What’s most important about this is we can detect it prior to therapy in patient samples, so this highlights its potential as a biomarker for response,” Katherine E. Masih, BS, an NIH-Cambridge scholar in the Genetics Branch, Center for Cancer Research at the National Cancer Institute, said in a press conference. “We hope that eventually this can improve patient selection and eligibility for CD19 CAR T-cell therapy.”

CD19 is a common target of CAR T cells, and resistance to treatment can occur even if patients continue to show CD19 expression. The investigators explored primary non-response (PNR) to CAR T-cell therapy, which occurs in 10% to 20% of patients and whose causes are not fully understood. Known reasons for non-response to CAR T cells include collection of dysfunctional T cells and decreased death cell receptors on the cell surface.2,3

The investigators used bone marrow samples from 14 participants in the PLAT-02 trial (NCT02028455) of CD19-directed CAR T-cell therapy for relapsed/refractory pediatric ALL.1 These samples included those of 7 patients who had a complete response to therapy and 7 who had no response. Non-response was defined as not achieving and maintaining minimal residual disease negativity at 63 days.

In patients who went on to have PNR, investigators discovered epigenetic markers including 238 regions of hypermethylated DNA, which is associated with inactivated genes (P = 8.15 × 10-25). These regions are known to be activated in stem cells.

Investigators found that the epigenetic differences did not lead to differences in phenotype of B cells between primary sensitive and PNR patients. However, PNR cells did show an increase in regions associated with hematopoietic stem cells and myeloid and lymphoid progenitors. In addition, investigators observed decreased antigen presentation and processing that could lead to lack of response in cells that still express CD19 (P = .0001).

These factors characterized a potential novel biomarker associated with PNR that investigators named Stem-Cell Epigenome with Multi-Lineage Potential (SCE-MLP). Masih acknowledged that the sample size of 14 patients was small and more research on SCE-MLP’s link to PNR is needed. “We would love to see this validated in a larger cohort with more cases of PNR that exist around the country,” she said.

Another potential use of SCE-MLP could be to find ways to overcome resistance to CAR T-cell therapy by combining it with targeted therapies that disrupt these epigenetic factors for resistance.

Currently, the investigators hope that this research will be used to shape patient selection for CAR T-cell therapy and alternative therapies.

“If we can reliably identify responders, perhaps through screening for SCE-MLP, we can prioritize less toxic targeted therapies for our patients and overall improve outcomes for children with this devastating disease,” Masih said.