Rugo Spotlights Potential With Tucatinib, Other Novel Agents in HER2+ Breast Cancer

Hope S. Rugo, MD, discusses the pending approval of tucatinib in metastatic HER2-positive breast cancer and other potentially practice-changing agents in the pipeline. 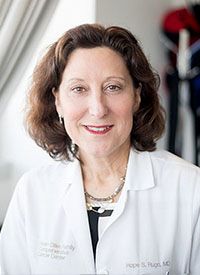 The advent of novel TKIs for the treatment of patients with metastatic HER2-positive breast cancer has expanded the armamentarium for those who relapse following frontline therapy, said Hope S. Rugo, MD.

For example, in February 2020, the FDA granted a priority review designation to a new drug application for tucatinib in combination with trastuzumab (Herceptin) and capecitabine (Xeloda) for the treatment of patients with unresectable locally advanced or metastatic HER2-positive disease, including those with brain metastases, following ≥3 prior HER2-directed agents separately or in combination, in the neoadjuvant, adjuvant, or metastatic setting.

In an interview with OncLive during the 37th Annual Miami Breast Cancer Conference, Rugo, a professor in the Department of Medicine and director of the Breast Oncology and Clinical Trials Education at University of California, San Francisco Helen Diller Family Comprehensive Cancer Center, and co-chair of the conference, discussed the pending approval of tucatinib in metastatic HER2-positive breast cancer and other potentially practice-changing agents in the pipeline.

OncLive: Could you discuss the potential approval of tucatinib in HER2-positive breast cancer?

Rugo: At the 2019 San Antonio Breast Cancer Conference (SABCS), we saw exciting data about targeting HER2-positive metastatic breast cancer with tucatinib. Unlike other oral TKIs, tucatinib targets HER2 more than EGFR or HER1. It doesn't cause as much diarrhea as other agents, such as neratinib (Nerlynx) or lapatinib (Tykerb).

Tucatinib was studied in the HER2CLIMB trial. HER2CLIMB was different from other trials, such as the NALA study that led to the approval of neratinib in the metastatic setting. NALA looked at neratinib versus lapatinib, both in combination with capecitabine. The difference with HER2CLIMB is that tucatinib was given with trastuzumab.

What activity does tucatinib have for patients with brain metastases?

A group of patients with brain metastases were enrolled [on HER2 CLIMB] who were relatively stable without a lot of symptoms. Some of those patients had not been previously treated with radiation while others had. Those patients were grouped together and showed a PFS improvement [with tucatinib].

In your opinion, what does the future application of tucatinib look like?

Where tucatinib goes will be interesting because when we looked at the adjuvant trial data from 2019 SABCS and compared it with other trials, we saw that we keep making improvements in HER2-positive breast cancer, but the rate of central nervous system (CNS) relapse has remained the same.

Tucatinib has a lot of activity in the CNS. We have seen from the phase Ib/II trials that it can be combined safely with ado-trastuzumab emtansine (T-DM1; Kadcyla). Additionally, as shown from a phase I trial, the combination demonstrated great efficacy with minimal toxicity.

There is an ongoing randomized trial looking at T-DM1 with a placebo versus tucatinib for patients with brain metastases.

The cooperative group ALLIANCE is looking at patients who did not have a pathologic complete response after neoadjuvant therapy and randomizing them to T-DM1 versus T-DM1 plus tucatinib. To me, that is a very exciting trial as well.

Will neratinib retain a role for this patient population, or will its use change if tucatinib is approved?

The extended adjuvant data with neratinib is quite interesting. It will still have a place for patients with high-risk disease. If we can give a less-toxic TKI, we are likely to use that in the metastatic setting, but there are a lot of interesting data with neratinib in patients with have HER2 mutations rather than HER2-amplified disease. There seems to be an increasing percentage of patients who have hormone receptor (HR)—positive breast cancer who also carry HER2 acquired mutations.

Lastly, could you discuss the data that have been reported thus far with margetuximab?

Margetuximab is a fascinating antibody that has had Fc engineering to improve its immune activity. It turns out that we have polymorphisms with the IgG Fc gamma receptor. Some of those polymorphisms make trastuzumab potentially less effective in a subset of patients, and it may be responsible for some resistance.

The randomized SOPHIA trial had treated patients who had all received prior trastuzumab and pertuzumab—and almost all of them had received T-DM1&mdash;and randomized them to receive chemotherapy with either trastuzumab or margetuximab. The trial showed a modest improvement in PFS.

Where it goes [in terms of sequencing] is unclear. There is a potentially planned neoadjuvant trial focused on patients who have the lower affinity IgG Fc gamma receptor and would compare margetuximab with trastuzumab in those patients to see whether or not we could demonstrate improved pCR rates.

I am interested to see whether or not we could move forward with that and where margetuximab will end up. It has a big competitive landscape at the moment with tucatinib, as well as [fam-] trastuzumab deruxtecan-nxki (Enhertu) coming out at the same time.