Men with metastatic castration-resistant prostate cancer who progressed following initial treatment with an androgen receptor-axis-targeted agent had better survival when treated with docetaxel in second-line. 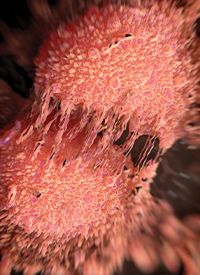 A total of 222 men who progressed following treatment with the ARATAs abiraterone acetate (Zytiga) or enzalutamide (Xtandi) were included in this retrospective analysis. Of these 222, 108 (48.6%) were treated with initial ARATA followed by alternative ARATA and 114 (51.4%) went from ARATA to docetaxel.

“These findings suggest that the introduction of docetaxel, rather than that of alternative ARATA, could result in favorable oncological outcomes in mCRPC patients progressing after treatment with initial ARATA,” first author Hideaki Miyake, MD, PhD, Department of Urology, Hamamatsu University School of Medicine, and coauthors wrote.

“It might be of merit to timely introduce docetaxel to mCRPC patients as a second-line agent considering several parameters associated with the prognosis of this cohort of patients, particularly performance score, in order to maximize the survival benefit of second-line docetaxel therapy,” added Miyake et al.

The study population included Japanese mCRPC patients diagnosed with progressive disease during or after treatment with initial ARATA who subsequently received either alternative ARATA or docetaxel from August 2014 to June 2016. All patients were histopathologically diagnosed with prostatic adenocarcinoma, and underwent androgen deprivation therapy (ADT) by medical or surgical castration.

The choice of first-line ARATA after the failure of the primary ADT, as well as that of a second therapy either with alternative ARATA or docetaxel , was usually determined by the preference of the treating physician and/or patient without strictly regulated criteria. As a rule, both ARATAs were administered in accordance with the previously reported standard dosing schedule, while docetaxel was generally administered at a dose of 70 mg/m2 every 3 weeks.

Men in the docetaxel group had higher PSA levels at baseline, but there were no significant differences in the remaining major clinicopathological parameters noted between these 2 groups. The proportions of patients achieving PSA decline of >0 (70.2% vs 50.0%), ≥30 (52.6% vs 33.3%), and ≥50% (42.1% vs 21.3%) were significantly higher in the ARATA-to-docetaxel arm.