The European Commission has granted a conditional approval to selumetinib for the treatment of pediatric patients with symptomatic, inoperable plexiform neurofibromas and neurofibromatosis type 1 who are at least 3 years of age.

The European Commission has granted a conditional approval to selumetinib (Koselugo) for the treatment of pediatric patients with symptomatic, inoperable plexiform neurofibromas (PN) and neurofibromatosis type 1 (NF1) who are at least 3 years of age.1

This marks the first approval of an option for patients with NF1 PN in the European Union (EU), and follows the positive opinion issued by the European Medicines Agency’s Committee for Medicinal Products for Human Use in April 2021.2

The regulatory decision is based on data from the phase 2 SPRINT Stratum 1 trial (NCT01362803), which was sponsored by the National Cancer Institute (NCI) Cancer Therapy Evaluation Program, of the National Institute of Health. Results indicated that the agent induced an objective response rate (ORR) of 66% in pediatric patients (n = 33/50) with NF1 PN.

Selumetinib is an inhibitor of MEK1/2; these proteins serve as upstream regulators of the ERK pathway. MEK and ERK are important components of the RAS-regulated RAF/MEK/ERK pathway, which is often activated in several cancers.

In the phase 2 SPRINT Stratum 1 trial, investigators set out to examine the ORR and impact on patient-reported and functional outcomes with selumetinib in pediatric patients with NF1-related inoperable plexiform neurofibromas.3

Study participants received selumetinib at the recommended phase 2 dose of 25 mg/m2 about every 12 hours in 28-day treatment cycles for a continuous dosing schedule. Adherence to the drug was evaluated by reviewing patient diaries and by counting capsules.

Notably, patients who had disease progression at trial entry were allowed to continue to receive selumetinib if they did not have progression during treatment. Those without evidence of progression at trial entry were permitted to continue treatment for a maximum of 2 years unless a partial response (PR) was reported. In that case, patients were able to continue treatment until discontinuation criteria for the trial were met. Patients were determined to be evaluable for response after they had received at least 1 dose of selumetinib.

Results from 50 patients enrolled to stratum 1 were published in the New England Journal of Medicine. The median age of these patients was 10.2 years (range, 3.5-17.4) and the median target neurofibroma volume at baseline was 487 mL (range, 5-3820). Forty-two percent of patients (n = 21) had progressive neurofibromas at the time of enrollment.

Moreover, participants had a median of 3 complications associated with neurofibroma (range, 1-5), and the most common complication observed was disfigurement (n = 44), followed by motor dysfunction (n = 33), and pain (n = 26).

The median duration of response and progression-free survival (PFS) had not yet been reached as of March 29, 2019. However, the 3-year PFS rate was 84% with the agent.

Additionally, 29 pediatric patients had data regarding tumor pain intensity that was available for assessment. Twenty-nine children and 42 parents had data on pain interference that could be examined.

Moreover, 29 pediatric patients and 45 parents had data available regarding health-related quality of life (QoL) that investigators were able to examine. Results indicated that the mean total QoL score on the PedsQL increased, which was indicative of improvement with selumetinib, on child-reported measures (mean change, 6.7 points; 95% CI, 01-13.3) and parent-reported measures (mean change, 13.0; 95% CI, 8.1-17.8). Moreover, 48% and 58% of children and parents, respectively, reported clinically meaningful increases in the score following 1 year of treatment.

One patient who discontinued treatment with the therapy because of an AE was noted to have disease progression at the time that the off-treatment assessment was performed 24 days later. Of the 6 patients documented to have progressive disease, 5 required prior dose reductions.

The AEs most frequently reported with selumetinib were grade 1 or 2 gastrointestinal effects such as nausea, vomiting, or diarrhea. Patients also experienced an asymptomatic increase in the creatinine phosphokinase level, acneiform rash, and paronychia.

Twenty-eight percent of patients required dose reductions because of AEs. Ten percent of these patients discontinued because of effects that were determined to potentially be associated with the study drug; these AEs included grade 3 diarrhea, grade 3 weight gain, grade 3 paronychia, grade 4 skin ulceration, and grade 4 elevated creatinine level.

Notably, no patients experienced symptomatic changes in the left ventricular ejection fraction or had retinal serous detachment or another vistion-threatening ocular effect.

“As the first medicine approved in the EU for patients with NF1, [selumetinib] has the potential to transform the way plexiform neurofibromas are managed and treated,” Dave Fredrickson, executive vice president of the Oncology Business Unit, at AstraZeneca, added in the release. “The SPRINT data showed that [selumetinib] not only shrank tumours in some children, but also reduced pain and improved their QoL.”

Zanubrutinib Approved in Canada for MCL 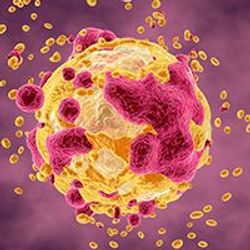