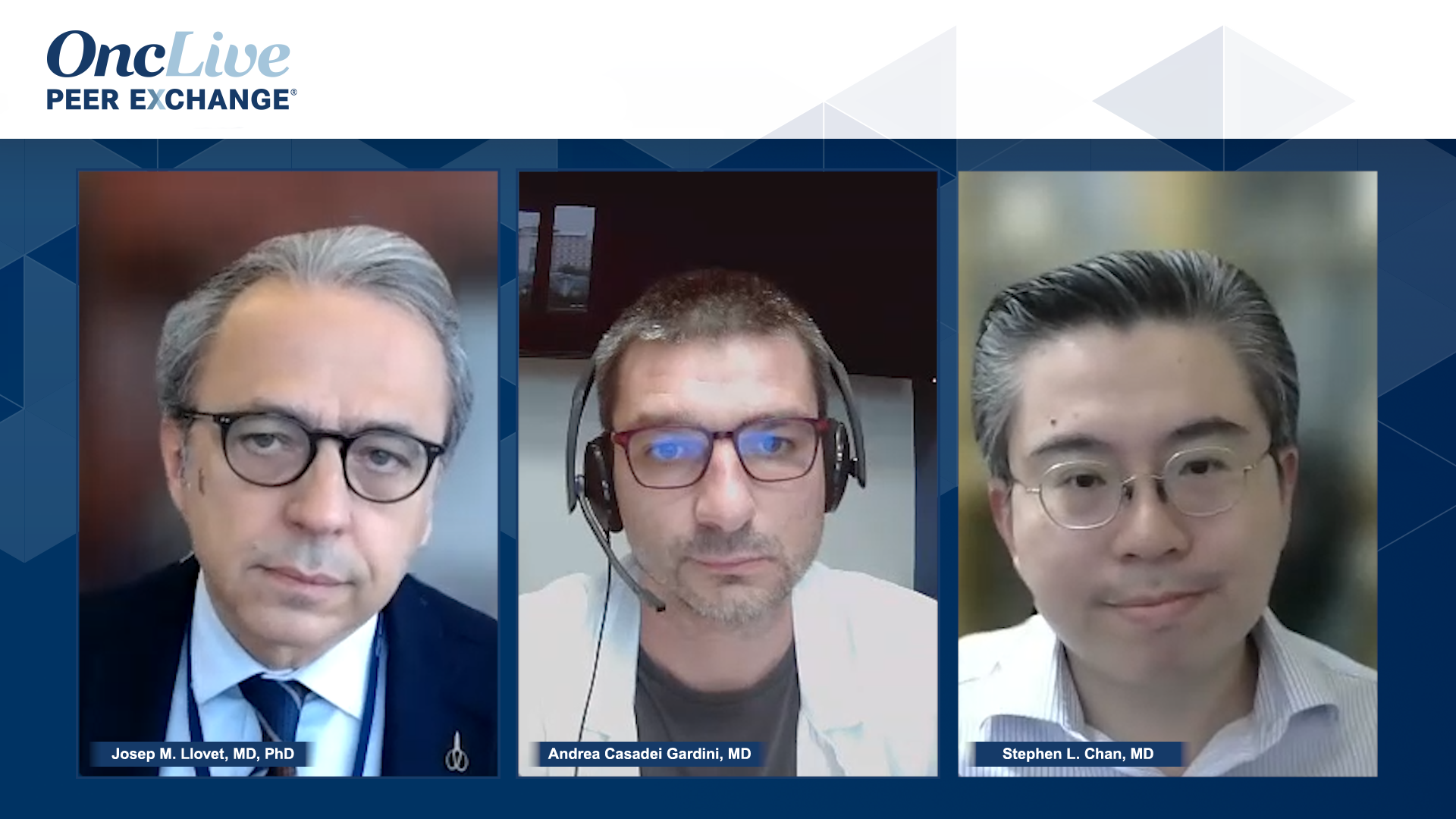 Josep M. Llovet, MD, PhD: One of the most important issues emerging is improving the bar of survival, which is 19.2 months for atezolizumab in the front line. More patients are exposed to systemic therapies, not only to 1 line but to 2 or 3 lines of therapies. Recent trials reported that around 50% of patients in the second line are receiving effective systemic therapies that impact the outcome. Atezolizumab is the frontline therapy, and a portion of patients will receive sorafenib or lenvatinib, depending on the criteria of the physician. But what happens with progression on atezolizumab? I’ve been checking the guidelines, and I’m involved in the AASLD [American Association for the Study of Liver Disease] guidelines.

Other guidelines, like the EASL [European Association for the Study of the Liver] guidelines or reviews, have suggested that we should respect the hierarchy. We reported in the AASLD trial design and end points paper last year and the hierarchy was established, let’s say sorafenib and lenvatinib first, and then regorafenib, cabozantinib, and ramucirumab afterward which should be respected. The ASCO [American Society of Clinical Oncology Annual Meeting] guidelines stated, “all treatments that are effective should be considered, but we should give priority to sorafenib or lenvatinib.” ESMO [European Society for Medical Oncology Congress] is more open. It stated, “Choose whatever treatment has been reported as positive, as superior compared with placebo, because we don’t have trials where patients progressed with atezolizumab.”

In cases of progression with atezolizumab, how do you enforce or suggest treating your patients with the established hierarchy, using lenvatinib or sorafenib? Or are you considering using other types of therapies that were approved in second-line progression to sorafenib?

Andrea Casadei Gardini, MD: We don’t have data from the phase 3 trial of the combination therapy. The problem is the local possibility of each state. In Italy it’s not possible to prescribe lenvatinib after atezolizumab-bevacizumab. You can only prescribe sorafenib. After progression of sorafenib, we prescribe cabozantinib. The USDA [United States Department of Agriculture] guidelines state that we should use the best option for the first and second lines. In the first line, sorafenib and lenvatinib are good because we have more options for our patients.

I just published a paper on Palermo [Italy] colleagues that evaluated the different overall survival between sorafenib and lenvatinib. In the second line, after this emerges…the colleagues see that lenvatinib is superior after sorafenib in 2 months. These data are known only in clinical practice, but we’re considering performing a study after progression from a first-line phase 2 or 3 trial. It’s difficult to conduct a study in the second line after atezolizumab. In the future I predict a study with regorafenib and pembrolizumab, and we will see the continuous forms of immunotherapy in the first, second, and third lines. As we change the TKI [tyrosine kinase inhibitor] associated with immunotherapy, we prescribe sorafenib, with lenvatinib as another option.

Stephen L. Chan, MD:I tend to be more restrictive. The simple reason is because the TKI sequence is already established by the phase 3 trials. The cabozantinib and regorafenib are second-line agents after sorafenib because of the additional targets, like RAF or EGFR inhibitions. If we allow using whatever TKI as a second-line therapy after atezolizumab-bevacizumab, then a lot of patients will require third- or fourth-line treatment. If you use cabozantinib, then what’s next? We have evidence to use lenvatinib or sorafenib afterward. I follow the established sequence: sorafenib and lenvatinib first, and then we follow the traditional sequence.