Should Sentinel Lymph Node Biopsy Be Postponed Until After Neoadjuvant Therapy?

With increasing use of neoadjuvant chemotherapy in early-stage breast cancer, controversy has erupted regarding the optimal timing of sentinel lymph node biopsy.

It has been hypothesized that the elevated falsenegative rate with delayed sentinel node surgery may be caused by uneven sterilization of the lymph nodes by the chemotherapy; certainly, it raises concern about the impact of this residual disease on the locoregional recurrence rate. When performed after neoadjuvant chemotherapy, sentinel lymph node biopsy also has a poorer identification rate of the sentinel lymph node than when it is performed prior to chemotherapy (87% vs 97%-100%).9 This decreased identification rate is postulated to be caused by structural changes in lymphatic drainage, such as fibrosis within the axilla.10 Finally, pretreatment determination of the pathological status of the lymph nodes can impact decisions regarding postoperative radiation therapy, and this information would be unavailable to patients who delayed sentinel node biopsy until after receiving chemotherapy.

Arguments for Delaying Sentinel Lymph Node Biopsy Proponents of performing sentinel lymph node biopsy after chemotherapy acknowledge both the lower sentinel node identification rate and the higher false-negative rate of this approach, but propose that both are reasonable. “Risk, like beauty,” Chagpar said, “is in the eye of the beholder. For some, the false-negative rate of 12% is too high; for others, it is acceptable.” She argued that there is less worry about residual disease in recent years, with regard to both its impact on locoregional recurrence and survival. For instance, the randomized NSABP B-04 trial, which was designed to determine whether outcomes would be compromised when the extent of surgery was reduced (from radical mastectomy), demonstrated that locoregional recurrences in the arm with the least extensive surgery (having no targeted axillary treatment) produced no worsening of overall survival.11 This suggests that the surgical resection of additional lymph nodes may have little to no impact on survival. It is also true that the timing of axilla staging in patients with locally advanced disease has minimal influence on the type of chemotherapy they will receive, and while upfront sentinel node biopsy may influence the decision to provide post-mastectomy radiation therapy, many of these patients would qualify for radiation therapy on the basis of tumor size alone.

Those in favor of delaying sentinel node surgery suggest that the benefits of this approach overshadow the modest risks (ie, residual disease in the axilla) associated with it, because it not only provides information regarding patients’ sensitivity to chemotherapy, which may be useful when making future treatment decisions, but it also permits those who achieve a pathologic complete response to chemotherapy to avoid the morbidity and reduced quality of life associated with axillary lymph node dissection.Regardless of when sentinel lymph node biopsy is performed, certain technical considerations are critical to optimal outcomes. For instance, Chagpar said it is now well accepted that nodal status is best determined by evaluating at least two sentinel nodes,12 and that a dual tracer—both a blue dye and a radioactive isotope—be used, if possible.13 A number of studies have tried to identify factors that can predict the status of nonsentinel nodes, but no robust variables have yet been found. However, research continues to search for ways to bolster sentinel lymph node findings. Despite the findings of the ACOSOG Z1071 and SENTINA trials, this remains an area of controversy, and physicians continue to search for the optimal means to stage their patients with locally advanced disease. 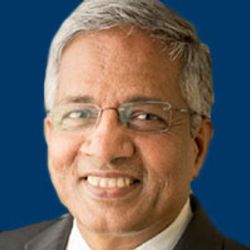