Staffing Costs for Oncology Practices Soar Amid Deluge of Paperwork

In the early years of his practice, George Kovach, MD, had three employees. A secretary and a nurse worked at the office, and his wife managed the business from home. The relatively light work of sending out bills was delegated to the secretary, who also handled the phones and reception.

More than 30 years later, Kovach’s practice, Iowa Cancer Specialists, has three oncologists, a nurse practitioner, and 27 other employees, which works out to nine staffers per physician or about seven per clinician. That includes multiple secretaries, billing staffers, pharmacy technicians, medical technicians, and nurses. Although the practice is busier now and operates a dispensary, Kovach said a significant portion of the added personnel costs resulted from the ever-increasing administrative burden of running an independent practice.

In the past, “You sent a bill, you put a diagnosis on it, you put a fee on it, and out it went,” said Kovach, a past president of the Association of Community Cancer Centers (ACCC). “Now there’s more complicated billing—the new coding system, the multiple insurance companies, the authorizations&mdash;so you’ve got to add people to deal with that. The poor secretary at the front desk didn’t have to do any of that stuff.”

These developments have driven practice staff levels steadily higher in recent years. From 2005 to 2014, the average number of full-timeequivalent employees per physician rose from less than seven to 10, according to the National Practice Benchmark for Oncology.1,2 In addition, the total annual compensation for those staffers cost practices about $500,000 per hematologist or oncologist. The survey, whose participating providers typically have 10 or fewer physicians, found that the average practice has 1.2 billing staffers per oncologist and one patient financial counselor for every three doctors.

The explosion of new drug options that has transformed oncology in the last decade is central to the need for more staff, said Robin Zon, MD, past chair of ASCO’s Clinical Practice Committee and chair-elect of its Government Relations Committee. Payers struggling to manage the very high costs of newer, often narrowly targeted therapies now require practices to submit patient clinical data in advance to prove the requested drug is indicated for the patient’s disease.

“It isn’t the old days, where it was just a certain small number of drugs and they all knew it worked and they all knew the data,” Zon said. “You have to get the data, you have to show that it’s compliant with a pathway, and there’s a lot of back-and-forth. It’s not only a burdensome task on our staff, it’s also a burdensome task on the payer’s staff, because there’s constant interaction. It’s much more complex and time-demanding.”

Whereas once preauthorization often took less than a day, three to five days is now standard, and some patients’ Medicaid or Affordable Care Act policies ask for as many as 14 days, Zon said. “Now you’ve got to have staff that not only submit the request, you’ve got to have staff checking to make sure it’s being worked on and you get the information,” she said. “You have staff dedicated to the Medicare payers, to the Medicaidtype payers, and to the private payers, and even within the private payers it’s split up because the contracts may be different and there are different ways the staff has to follow up.”

Along the way, insurer denials also became much more common. Zon said that made sense for some requests, like expensive, overused scans, but not for every non-standard drug use. Such requests generate an “ever-revolving door” of denials and appeals, she said. Payers are also very resistant to covering research, so some practices must hire business staffers who are trained in the details of clinical trials.

In many offices, employees find themselves taking on a variety of roles as new demands arise. Andrea Anderson, practice manager for Bruce Hayton, MD, a solo oncologist in Wildomar, California, said her duties have repeatedly shifted over the years as the office has adapted to new administrative obligations and hired additional staff.

Eight years ago, she started as a receptionist and helped with billing, but she soon was put on preauthorizations as preferred provider organization payers began requiring them more frequently, she said. Five years ago, the practice hired a biller so Anderson could refocus again, this time on the practice’s pharmacy and a series of mandates and programs introduced by CMS: Physician Quality Reporting System, electronic health record (EHR) Meaningful Use benchmarks, and electronic prescribing. “The amount of work I have as a manager, and to keep up as the compliance officer in managing all of these measures you have to be compliant with, is astronomical. There are so many balls in the air, you’re just praying that the wrong ones don’t fall, or they all don’t fall,” she said.

A medical assistant (MA) took over managing the drug inventory, and 18 months ago another MA was hired to handle insurance authorizations, referrals, and other tasks as needed. Hayton now has nine employees, and Anderson would like to hire another to work on accounts receivable and overdue bills. The practice is not part of CMS’s Oncology Care Model (OCM) pilot because it cannot afford more nurses to answer patient calls 24 hours a day, Anderson said.

A group that is participating in the OCM is Oncology Consultants of Houston, which has 14 physicians and 205 employees at 11 locations, including a dedicated business office. Practice administrator Alti Rahman said providing after-hours care is expected to eventually reduce emergency department visits and bring total treatment costs down.

Making the model work financially in the short term is a puzzle. The broader transition to a health system that coordinates care more efficiently, as accountable care and patient medical home models try to do, requires more upfront investment in staff and other resources, Rahman said. “The oncologist is essentially the primary care physician for the cancer patient. They’re the gateway, and they’re supposed to manage it.

We have to build infrastructure. We have to say to the patient, ‘Look, if you experience any issues, we’re not just going to send you the hospital. You’re going to call our triage center.’ Our practice has an-house triage that we’re going to further develop.”

Oncology Consultants appears to have a high ratio of staff to physicians, but Rahman said a payroll breakdown shows it is actually quite efficient. Of every dollar in revenues, $0.03 to $0.04 goes toward compensation for billing and other nonclinical staff, he said. The customary range is $0.04 to $0.05, and through the Community Oncology Alliance he has heard of practices that spend as much as 7 cents per dollar.

Brad Prechtl, CEO of the steadily expanding mega-group Florida Cancer Specialists (FCS), said that before becoming part of FCS, small practices are typically spending $0.06 to $0.08 per revenue dollar on services including revenue cycle management, purchasing, information technology, legal, accounting, marketing, compliance, and contracting. By switching them to its centralized back office and using quality-management tools, FCS can keep overall administrative spending to under $0.03, Prechtl said.

“The staffing ratios within smaller practices are going to be higher than what they would end up being within a larger practice like Florida Cancer,” he said. “A lot of that has to do with the fact that we’re able to leverage our size and scale, and spread those administrative tasks over a broader number of physicians.”

Prechtl and others said they gauge the effectiveness of their staffing models by dollars rather than headcount. Increasing revenue improves the efficiency calculation and makes a larger staff viable. That’s part of the reason that improving revenue cycle management—making sure co-pays are collected, claims are paid, and overdue bills are pursued&mdash;is so important. Some practices respond to that challenge by joining hospitals or large groups like FCS that have central business offices. Others try to improve their internal expertise, although that can be a difficult and uncertain process. Another option is to use the consulting services of US Oncology or another firm that can suggest process improvements or review the practice’s books and find missed financial opportunities.

Zon said she knows of a practice that used US Oncology and learned it was missing out on hundreds of thousands of dollars in rembursements because a payer contract wasn’t being followed correctly. Consultants can help with staff reorganizations, or point out unexpected opportunities like real estate tax breaks, which can save large sums over time. Finding the right EHR system is also key. Kovach said he built his own in-house EHR and billing solution that made his office workflow more efficient and eased the administrative burden; it ensures treatments are recorded and billed for, drug preauthorizations are obtained, and pathway requirements are front-and-center. It also provides quick access to billing records to help challenge denials, among other features.

Zon said her EHR likewise helps her billing staff and eases access to pathways and other information. But she said computerization had actually created more of an administrative burden for the physicians. Formerly, she would simply tell staffers which drug a patient needed and let them process the paperwork. Now “it’s just more clicks at the end of the day” for an oncologist who must navigate a series of screens instead of using her time more productively.

“It’s much more laborious, and it involves much more interaction with the provider, just to get the process started,” Zon said. “There are many more administrative duties that we, as providers, have had to assume that used to be delegated to our nurses or to our business staff.” 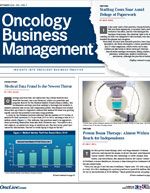