State of Immunotherapy Continues to Shift in NSCLC

Liza C. Villaruz, MD, addresses the immunotherapy clinical trials that have informed the treatment of patients with NSCLC and the current state of biomarkers in the field. 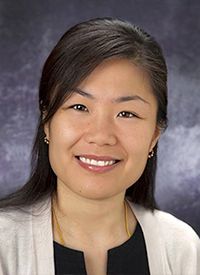 The KEYNOTE-024 trial may have positioned pembrolizumab (Keytruda) as the frontline treatment for patients with PD-L1—overexpressing tumors, but there have been many other trials that have followed suit, explained Liza C. Villaruz, MD. Additionally, other studies continue to showcase combination immunotherapy’s potential in the first-line setting.

In the CheckMate-026 trial, single-agent nivolumab (Opdivo) did not improve progression-free survival or OS compared with chemotherapy in the frontline setting for patients with PD-L1—positive NSCLC. However, patients enrolled in CheckMate-026 had PD-L1 expression on ≥5% of tumor cells—a much broader range than in the successful KEYNOTE-024 trial of single-agent pembrolizumab. Patients with tumors showing ≥50% PD-L1 were selected for that study. Further, although CheckMate-026 was negative, it gave physicians greater insight into the application of tumor mutational burden (TMB), said Villaruz, an application that was later utilized in the CheckMate-227 trial.

Results of a subgroup from the CheckMate-227 trial, which were presented at the 2018 ASCO Annual Meeting, showed that the combination of nivolumab and low-dose ipilimumab (Yervoy) reduced the risk of progression or death by 52% versus standard platinum doublet chemotherapy for patients with metastatic PD-L1—negative, TMB-high NSCLC.3

OncLive: What do we know about immunotherapy in NSCLC?

In an interview at the 2018 OncLive® State of the Science Summit™ on Lung Cancer, Villaruz, assistant professor of medicine, Division of Hematology/Oncology, University of Pittsburgh, addressed the immunotherapy clinical trials that have informed the treatment of patients with NSCLC and the current state of biomarkers in the field.Villaruz: I covered some of the data in the second-line setting, which established single-agent immunotherapy as part of the standard of care. I focused on the KEYNOTE-024 data, which established pembrolizumab in the first-line setting for PD-L1—overexpressing tumors.

It was truly practice changing. It was very impactful, and it established PD-L1 testing as part of the standard workup of advanced NSCLC.

I also spoke about the recently presented KEYNOTE-042 data, which looked at first-line pembrolizumab in patients with any level of PD-L1 expression. I mentioned some of the caveats in interpreting that data. I spoke about the CheckMate-026 data, which was a very similar trial to KEYNOTE-042, but with nivolumab as opposed to pembrolizumab. That trial is still very important even though it was negative, because it gives us insight into the TMB story as a biomarker for response to immune checkpoint inhibition.

In the second-line setting, what factors go into deciding which of the 3 checkpoint inhibitors to give?

What factors help you decide whether to give pembrolizumab as a single agent or in combination in the frontline setting?

I also discussed the CheckMate-227 data, which looked at the utility of nivolumab and ipilimumab in patients with high TMB. These are very intriguing data and also gives an indication that TMB is a potential biomarker for patient selection for combination immunotherapy. I rounded out the conversation by talking about single-agent immunotherapy in patients with stage III disease in which single-agent nivolumab has a foothold in treatment. In the previously treated setting, the immune checkpoint inhibitors are essentially equivalent from a therapeutic standpoint. There was a trial that looked at pembrolizumab in previously treated patients who were selected based on some level of PD-L1 expression. With that exception, nivolumab, atezolizumab (Tecentriq), and pembrolizumab all have about the same efficacy in previously treated patients, regardless of histology. There is always going to be the suggestion that the efficacy increases with increasing levels of PD-L1 expression. However, there’s efficacy across PD-L1 cut-points. PD-L1 expression is really the most important factor. I have the tendency to prescribe single-agent pembrolizumab in patients who have PD-L1—overexpressing tumors. The response rates are very significant. It's about a 45% response rate.

Could the combination of atezolizumab, bevacizumab (Avastin), and chemotherapy shift the landscape even more?

Your likelihood of getting response is more than likely going to be a bit higher if you combine chemotherapy with pembrolizumab, regardless of PD-L1 expression cut-points. Response rates are more on the order of 60%, rather than 45%. However, you have to take that with a grain of salt because you're doing cross-trial comparisons. In [tumors with] less than 50% [PD-L1 expression], chemotherapy and pembrolizumab is my new standard, whether they have any level of PD-L1 expression or not. The IMpower150 data were very intriguing and very impressive. There is a select patient population who can potentially benefit from the combination of chemotherapy, bevacizumab, and atezolizumab. Though the numbers are small, there’s a suggestion of benefit within the EGFR-mutant population who have been previously treated with tyrosine kinase inhibitors. The magnitude of benefit was quite impressive. If you're looking for a chemotherapy regimen for those patients, that would be my choice.

Can you expand on the CheckMate-227 study findings?

What other questions are remaining with biomarkers?

There are also interesting data with regard to the subset of patients who have liver metastases. There is a significant proportion of patients who have disease burdens within their liver. Those are the patients [for whom] I might also think about carboplatin, paclitaxel, bevacizumab, and atezolizumab. One can argue what the optimal TMB cut-point is, but it can be defined as high as 10 mutations/megabase in about one-third of patients. In the retrospective analyses, nivolumab tends to do better than chemotherapy in that patient population. This was studied in the CheckMate-227 trial, in which patients with high TMB performed better with nivolumab and ipilimumab and even with nivolumab compared with chemotherapy. It's intriguing, and it is hypothesis generating. The question is, “How is it going to apply in the real world in terms of different assays and cut-points?”It's also important to note that high TMB seems to be an independent predictive biomarker of response compared with PD-L1. They interplay, so patients with high PD-L1 expression and high TMB have the highest chances of response as opposed to patients who have one or the other. That's the suggestion in the literature.

What other abstracts presented at the 2018 ASCO Annual Meeting did you find interesting?

The unanswered questions are how readily accessible this TMB assay would be to a clinician, what type of assays they're using, and how those assays are going to translate amongst each other. [Determining] the TMB cut-point and defining TMB from peripheral blood [is another area of exploration. [We’ll have to see] how that will correlate with what we're finding in the tumor and if that can be used to predict response. The data with regard to immunotherapy in the mutant populations were very intriguing. There were reports of small trials looking at single-agent immunotherapy in the first-line setting, specifically EGFR-mutant patients. It confirms what we know, which is that immunotherapy should not be a mainstay of treatment for these patients. It's always been reserved for the third- or fourth-line of treatment after everything else has been exhausted. Even in that population, the response rates are very small. If you have the option, you should still be giving chemotherapy and potentially chemoimmunotherapy.