The antibody-drug conjugate T-DM1 (ado-trastuzumab emtansine; Kadcyla) will have an impact on the entire spectrum of care for patients with metastatic HER2-positive breast cancer, resulting in a greater emphasis on patient selection protocols and testing.

The antibody-drug conjugate T-DM1 (ado-trastuzumab emtansine; Kadcyla) will have an impact on the entire spectrum of care for patients with metastatic HER2-positive breast cancer, resulting in a greater emphasis on patient selection protocols and testing, according to the expert panelists in a recent Peer Exchange discussion.

T-DM1, which was first approved by the FDA in February 2013, is being explored in several settings as a single agent and in combinations for patients with HER2-positive metastatic breast cancer. Additionally, studies are exploring biomarkers of response that may provide clues for selecting optimal treatments. In general, many of these studies are ongoing or have recently been presented, noted Adam M. Brufsky, MD, PhD, in the recent OncLive Peer Exchange roundtable entitled “Practical Considerations in Breast Cancer.”

The approval of T-DM1 was based on results from the phase III EMILIA trial1 that randomized 991 patients with HER2-positive advanced breast cancer previously treated with trastuzumab (Herceptin) and a taxane in a 1:1 ratio to T-DM1 or lapatinib (Tykerb) plus capecitabine. Overall, treatment with T-DM1 resulted in a median progression- free survival (PFS) of 9.6 months versus 6.4 months with lapatinib/capecitabine. The median overall survival (OS) was 30.9 months for T-DM1 versus 25.1 months for lapatinib/ capecitabine.

Moreover, T-DM1 was associated with fewer adverse events (AEs). Grade 3 or higher AEs occurred in 57% of patients in the lapatinib/capecitabine arm compared with 41% for the T-DM1 arm. “This is an ongoing open-label study with some very significant results reported and by every measure used,” said Brufsky. “T-DM1 had a greater efficacy and less toxicity than combined lapatinib and capecitabine.”

Data from the phase III TH3RESA study2 were presented at the 2013 European Cancer Congress. This study randomized 602 patients with advanced HER2-positive breast cancer previously treated with at least two HER2-directed therapies in a 2:1 ratio to receive T-DM1 or physician’s choice of treatment. The administration of T-DM1 resulted in a median PFS of 6.2 months compared with 3.3 months in the control arm. The median OS findings are not yet available. “What data we have is that both in EMILIA and in TH3RESA, the T-DM1 should be the goto agent,” said Kimberly L. Blackwell, MD. “EMILIA and TH3RESA really suggest that T-DM1 should play a major role in the treatment of HER2- positive, trastuzumab-refractory metastatic breast cancer.”

Building upon these results, the phase III MARIANNE trial3 is examining T-DM1 plus or minus pertuzumab (Perjeta) compared with trastuzumab plus a taxane for recurrent locally advanced or untreated patients with HER2-positive metastatic breast cancer. Although results have not yet been presented, experts expect this trial to establish T-DM1 as the first-line standard of care. In addition to demonstrating the overall efficacy of T-DM1 in the frontline setting, the MARIANNE trial will establish whether the addition of pertuzumab to T-DM1 improves efficacy.

“This is an ongoing trial which really I believe— and I think all of us here probably share this opinion—that’s going to set the standard of care for first-line treatment for metastatic breast cancer,” Brufsky said during the Peer Exchange. “Unfortunately, in the MARIANNE trial, there’s no arm of THP [Taxotere, Herceptin, Perjeta], but I think that just was the way it was designed.”

The MARIANNE trial has a dual primary outcome measure of PFS and the incidence of adverse events. Results from this study are expected in 2016.

“I don’t think you can underestimate the importance of the MARIANNE study. I think it will set a standard of care for the patient who is just facing newly diagnosed metastatic or recurrent HER2-positive breast cancer,” Blackwell said. “And, I think we’re all anxiously awaiting whether or not adding pertuzumab, which has been shown to have efficacy in combination with trastuzumab, will add something on top of T-DM1.”

Adding to the data on these trials, Hope S. Rugo, MD, suggested that, even following treatment with five different regimens, patients with HER2-positive metastatic breast cancer still seem to respond to treatment with T-DM1. Moreover, some patients seem to experience a longer duration of response than others, including up to four years.

“What was really remarkable to me was that I had patients who didn’t respond, patients who had short-lived responses, but there were a few patients in my practice, one of whom still is on treatment, who stayed on for more than three years,” said Rugo. “It is clearly a very interesting agent with modest toxicity that we have no idea who responds to, other than they have HER2-positive disease. And, that would be a great task for moving forward.”

An assessment of HER2 overexpression is essential for determining the optimal use for T-DM1, highlighting the need for accurate testing. From a practical standpoint, Blackwell advises that if a patient does not seem to respond well to a trastuzumab- based regimen, there may be a need for HER2 retesting, in order to ensure that T-DM1 would be an appropriate treatment.

Obtaining a new tissue sample for retesting in the metastatic setting represents a fresh set of challenges. In these situations, Blackwell recommends a biopsy of the most easily accessible metastatic lesions, which usually are located in the liver or the mediastinal lymph nodes. Additionally, bone metastases are reasonable targets for biopsy. However, the results of these metastatic biopsies should be viewed in the context of clinical data, such as the therapies to which a patient has responded in the past.

“I’ve tried to stay away from the term ‘positive,’” Blackwell said. “There’s a disconnect in about 10% to 12% of patients, and so I think you have to use the clinical biopsy information in the context of what the patient’s tumor has responded to and what it hasn’t.”

Mark D. Pegram, MD, cautions against testing for HER2 gene amplification outside of IHC and FISH, since not all tumors fall within the intrinsic gene expression phenotype. Utilizing the phenotype method may result in misleading results that could be hazardous.

“You have to be very careful trying to make that substitution because you’ll be wrong a percentage of the time. The converse is also true,” said Pegram. “There are some cases that are in the HER2 transcript phenotype that don’t have the HER2 alteration based on gene amplification or protein overexpression and yet they have that same transcript profile. So, I think it would be hazardous to make that substitution.”

In order to accurately interpret HER2 test results, Joyce A. O’Shaughnessy, MD, recommends following the ASCO/CAP guidelines, which were updated in October 2013.4 The revisions now indicate that tumors are HER2-positive by IHC if protein expression is >3+ in more than 10% of cells. Also, by ISH testing, tumors are HER2-positive if the HER2/ CEP17 ratio is ≥2 or the HER2 gene copy number is ≥6. These revisions make the guidelines more helpful in the clinic and are based on evidence from clinical studies, notes O’Shaughnessy.

Moreover, Rugo suggests that ISH and IHC assays should be used preferentially for detecting HER2 status, as opposed to RT-PCR or microarrays.

In some situations, gene expression-based tests may incorrectly identify patients as HER2-positive or negative, resulting in patients not receiving the most effective therapy. The utilization of HER2-targeted therapies results in an improvement in survival for patients with breast cancer, which makes detecting HER2 positivity even more important.

“One wonders whether activation of HER2 by a kinase mutation might give you a transcript profile analogous to a HER2-like tumor, even in the absence of gene amplification or protein over-expression,” said Pegram. “But it’s speculation. I haven’t seen the array phenotypes of those rare mutations. It’s only about 2% of breast cancers.”

In addition to HER2-positivity, certain mutations in the PI3 kinase pathway seem to influence sensitivity to HER2-targeted therapy. These findings were initially supported by a biomarker analysis5 from the four-arm NeoSphere trial that examined pertuzumab plus trastuzumab with docetaxel in newly diagnosed patients with HER2-positive early-stage breast cancer. Overall, this analysis did not show a significant difference between PIK3CA-mutant and wild type, in terms of variation in pathologic complete response (pCR). However, when researchers examined patients with PIK3CA exon 9 mutations only, two out of 28 had a pCR. Moreover, zero out of four patients with PIK3CA exon 7 mutations had a pCR. This information suggests these mutations have a deleterious effect, even for patients receiving pertuzumab. However, biomarker analyses from the EMILIA trial did not find an association between PIK3CA mutations and resistance for women with HER2- positive metastatic breast cancer treated with T-DM1.6 Nevertheless, these same analyses did indicate that PIK3CA mutations negatively impacted the efficacy of lapatinib plus capecitabine.

In addition to improving upon testing strategies for HER2-positive breast cancer, studies are examining the optimization of dosing. One such study, explains Denise A. Yardley, MD, is exploring a weekly schedule of T-DM1 plus pertuzumab. This study will add to the clinical trial data already anticipated in the first-line setting from the MARIANNE study.

In a phase I study that examined weekly T-DM1,7 the results suggest that a weekly dose at 2.4 mg/kg has antitumor activity and is well tolerated in patients with HER2-positive metastatic breast cancer. In this study, objective partial tumor responses were reported in 46.4% patients with a median duration of response of 18.6 months. Overall, the 6-month clinical benefit rate for the weekly dose was 57.1%.

“Hopefully, with the biomarkers and looking at that schedule, we may see some further exploration of that combination and adding on to that whole frontline therapy with MARIANNE, and see if there is a signal with a weekly schedule,” said Yardley.

There are several ongoing clinical trials exploring treatments for HER2-positive breast cancer, including APHINITY. Of note, suggests Brufsky, the phase III randomized KAITLIN study (BO28407) will compare T-DM1 plus pertuzumab to trastuzumab with pertuzumab plus a taxane as adjuvant therapy following anthracyclines for patients with HER2-positive primary invasive breast cancer. 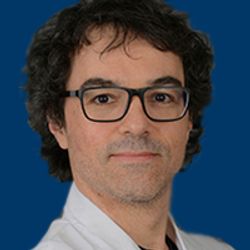 Trastuzumab Deruxtecan Approved in Europe for HER2+ Metastatic Breast Cancer