Targeted DNA sequencing prior to transplant can be used to determine which patients with myelodysplastic syndrome are at high risk for posttransplant relapse and should forego reduced-intensity conditioning in lieu of myeloablative conditioning. 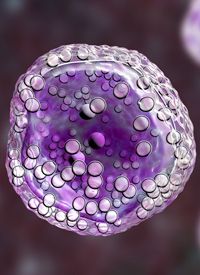 Targeted DNA sequencing prior to transplant can be used to determine which patients with myelodysplastic syndrome (MDS) are at high risk for posttransplant relapse and should forego reduced-intensity conditioning in lieu of myeloablative conditioning, according to findings from a study published in JCO Precision Oncology.

At a median follow-up of 53 months, of the 48 patients evaluated, 14 experienced treatment-related mortality (TRM), 23 were relapse free, and 11 had relapsed disease, of which 7 died. Forty-two percent of patients (n = 20) had detectable mutations prior to treatment. Patients with a positive mutational profile had a higher 3-year relapse rate compared with patients without detectable mutations, at 40% and 11%, respectively (P = .022) and a decreased 3-year overall survival (OS) rate, at 55% and 79%, respectively (P = .045).

“Detection of mutations using a DNA-sequencing panel covering regions of 10 genes, previously shown to have utility at the same timepoint in patients with acute myeloid leukemia, was associated with increased rates of relapse and decreased relapse-free survival [RFS] and OS. Many of these genes, including TP53, RUNX1, JAK2, and RAS pathway genes, have shown prognostic significance in other MDS studies or are indicative of potential leukemic progression, [such as] FLT3 and NPM1. However, it should be noted that mutations in IDH1, IDH2, JAK2, and NRAS were not seen in relapsing patients in this cohort,” wrote lead study author Laura W. Dillon, PhD, of the National Human Genome Research Institute, and co-investogators in the paper.

Allogeneic hematopoietic cell transplant is the only curative treatment for patients with MDS. However, some patients remain at risk for relapse after transplant, prompting investigators to evaluate the benefit of using ultra-deep genomic testing to tailor the use of conditioning regimens accordingly.

In the study, targeted error-corrected DNA sequencing was performed on patients’ blood samples (n = 48) prior to receiving conditioning therapy. Patient samples were collected from the Blood and Marrow Transplant Clinical Trials Network 0901 phase 3 randomized clinical trial (NCT01339910), which evaluated outcomes with allogeneic hematopoietic cell transplant conditioning in adult patients with MDS. All patients had less than 5% marrow myeloblasts and no leukemic myeloblasts in the blood on morphological analysis at the time of pretransplant assessment. TRM, relapse, RFS, and OS served as clinical end points of the study.

“The prognostic significance of the remaining mutations on relapse was dependent on conditioning intensity, with higher rates of relapse and lower RFS observed in patients randomly assigned to receive reduced intensity conditioning compared with myeloablative conditioning,” wrote the study authors. “Analysis of larger MDS cohorts using broad next-generation sequencing panels will have to be performed to define the mutations with greatest prognostic significance at the pre-allogeneic hematopoietic cell transplant timepoint.”