Targeted therapies have helped to improve responses in patients with relapsed chronic lymphocytic leukemia regardless of high-risk disease, although optimal sequencing and toxicity management need to be further explored to strengthen the utilization of these options. 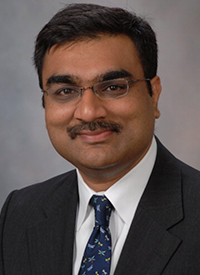 Targeted therapies have helped to improve responses in patients with relapsed chronic lymphocytic leukemia (CLL) regardless of high-risk disease, although optimal sequencing and toxicity management need to be further explored to strengthen the utilization of these options, according to Asher Chanan-Khan, MD.1

“Improved responses with targeted therapies in the relapsed setting is independent of high-risk disease,” Chanan-Khan, a professor of medicine at Mayo Clinic, said during a presentation during the 25th Annual International Congress on Hematologic Malignancies. “We are now in a fortunate time period where even patients with deletion (del)17p have an opportunity to have a longer duration of response.”

Several concepts must be considered when managing patients with relapsed CLL, Chanan-Khan said. First, a diagnosis of CLL must be confirmed. Disease can lead to the complication of Richter’s transformation, which is evidenced by a sharp increase in lactate dehydrogenase levels. Notably, not all patients with relapsed disease will need therapy, according to Chanan-Khan, who added that treatment should be reserved only for patients with active or progressive disease.2 “Second- and subsequent-line treatment decisions should follow the same indications as those used in the frontline setting,” noted Chanan-Khan.

When selecting a treatment strategy for a patient with relapsed disease who previously received treatment with a chemoimmunotherapy, patient characteristics, such as age and comorbidities; disease characteristics, including presence of bulky nodes, fluorescence in situ hybridization score, and IGHV mutational status; and the goal of treatment, should all be considered. The same considerations should be used for patients with relapsed disease who previously received a novel therapy. Here, initial response duration and tolerability of the initial therapy should also be taken into account, according to Chanan-Khan.

Several BTK inhibitors are available for use in the relapsed setting, one of which is ibrutinib (Imbruvica). In the phase 3 RESONATE trial (NCT01578707), ibrutinib was compared with ofatumumab (Arzerra) in patients with previously treated CLL or small lymphocytic lymphoma (SLL).3 After a median follow-up of 65.3 months, the median progression-free survival (PFS) continued to be significantly longer in the ibrutinib cohort compared with the ofatumumab cohort, at 44.1 months vs 8.1 months, respectively (HR, 0.148; 95% CI, 0.113-0.196; P <.001).

“Those who had (del)17p showed the most inferiority, [however] patients with del(11q) tended to do very well and their outcome was better,” Chanan-Khan said. “Again, if [a patient has] TP53 or (del)17p, concurrently, [they] tend to do worse than if [they] have 1 or the other. IGHV mutation status, which is another parameter that we tend to monitor in these patients, did not necessarily make a huge difference, [which] is refreshing to see.”

Additionally, ibrutinib has also yielded better outcomes when used in earlier lines of treatment, according to results from an integrated analysis done in patients with CLL who received the BTK inhibitor in either the first-line setting in the phase RESONATE-2 trial (NCT01722487) or the relapsed/refractory setting in the RESONATE trial.4

“These particular data show that…earlier use of a BTK inhibitor, in this case ibrutinib, resulted in a better [5-year] PFS vs if you were to use it later,” Chanan-Khan said. “If you were to use it after 3 prior therapies, the [median] PFS was around 33 months, whereas if you picked it [for use] earlier on in the first-line setting, [median] PFS could be as good as 70 months. This is significantly better in terms of choosing a BTK inhibitor early on.”

Patients in the first-line setting experienced a 5-year overall survival (OS) rate of 83% compared with 58% in patients who received 3 or more prior lines of therapy. The median OS for the overall patient population in the first-line setting had not yet been reached vs 67.4 months in patients who were treated with 3 or more prior lines of therapy.

Another BTK inhibitor, acalabrutinib (Calquence), was approved by the FDA in November 2019 for use in patients with CLL and SLL, based, in part, on the results from the phase 3 ASCEND study (NCT02970318).5,6 Patients with relapsed/refractory CLL who had progressed on at least 1 prior line of therapy were enrolled on the trial. Participants were randomized to receive either 100 mg of oral acalabrutinib or the control regimen of either 150 mg of oral idelalisib (Zydelig) plus rituximab (Rituxan) or 70 mg/m2 of intravenous bendamustine (Bendeka) on days 1 and 2 plus rituximab.

“If you look at the PFS for this particular study, you will see that the median PFS had not yet been reached at the time these data were presented [in those who received] acalabrutinib vs 16.5 months in those who received either a PI3K inhibitor or a chemoimmunotherapy,” Chanan-Khan reported. “Again, [this is] in favor of a BTK inhibitor in the relapsed setting.”

“Those who had undetectable MRD tended to have significantly better outcomes in terms of 24-month PFS vs high MRD–positive patients. If you look at the data that are available at 1.5 years, 90% of patients who [had undetectable MRD] were progression free vs 8%,” Chanan-Khan said. “MRD becomes an important area in terms of [patients with] relapsed/refractory [disease]. Therefore, there’s an increased desire to combine or achieve MRD as an end point, even in this particular patient population.”

Strategies for Progression on Targeted Regimens

Patients who have progressed on a targeted therapy is becoming increasingly common as novel agents such as PI3K inhibitors, BTK inhibitors, and BCL-2 inhibitors are used more often.

One possible approach for patients who progress after treatment with ibrutinib and/or idelalisib is venetoclax, a concept that was examined in a phase 2 study (NCT02141282).9 Patients enrolled on the study had a median of 4 prior lines of therapy (range, 1-15). Those who were treated with venetoclax monotherapy experienced a median PFS of 24.7 months. The median duration of response (DOR) and OS had not been reached at 24 months of follow-up.9-11

Chanan-Khan also reviewed strategies for patients who had progressed after being treated with venetoclax.

“If [a patient who] previously received venetoclax were to now receive a BTK inhibitor, the outcome is the best in terms of [the fact that] over 80% of these patients will respond. However, if [a patient is] BTK resistant, then the ORR tends to be less,” Chanan-Khan concluded. “Patients who are BTK intolerant, when given treatment, tend to have even better responses of around 70%. As I noted earlier, CD20 antibodies tend to [yield…the least] responses in terms of sequencing.”