Adi Diab, MD: NKTR-214, as I said, it’s a cytokine that leads to proliferation of the T cells and infiltration of the T cells into the tumor microenvironment. And proliferation is considered the first needed step for an active immune response. Whether it’s against cancer or against infections, proliferation is considered the hallmark of an active immune response. Once you proliferate, you also get the T cells activated and you get an activation marker. PD-1 is one of the activation markers. Obviously, it’s engagement whether its ligand, the PD-L1, leads to the exhaustion. But as a phenotype T cell that has a PD-1 on the surface, it’s a marker of activation.

And we notice from the monotherapy trial, from the on-treatment biopsies that we obtained on the patients who received NKTR-214, that the infiltrating T cells into the tumor microenvironment across different cohorts of tumors notice them; they’re upregulating their PD-1. And that has led us to the rationale that combining it with an anti—PD-1 agent will be very helpful. Obviously, the preclinical data also supported the combination and demonstrated that synergy.

But furthermore, these are completely nonoverlapping mechanisms. One truly leads to the stimulation of the immune cells. And sometimes you can call it a nonspecific way: anti—PD-1 rescues, most likely specific T cells that recognize the antigens. So, it relies on the immune system to recognize the cancer and then it comes to play by rescuing the last step of inhibitions. But it does not necessarily contribute to the increasing of those T cells that recognize further antigens.

The PIVOT-02 trial is a phase I/II study combining NKTR-214 together with nivolumab in patients with solid tumor malignancies. The initial data were as phase I to identify the recommended phase II. And in the phase I dose escalations, we tested 5 different doses and different scheduling. And ultimately, we recognized that recommended phase II as NKTR-214 0.006 mg/kg and nivolumab 360 mg, both given intravenously as an outpatient regimen every 3 weeks.

And the initial data that were presented last year at SITC, we had very promising responses. We had a 64% response in the melanoma cohorts, and initially we had a 46% response rate into the renal cell carcinoma. And only in patients who we enrolled into the lung cancer, we have 3 out of 6 patients who are responding.

What was interesting in the NKTR-214 combination with nivolumab, and that’s what we picked up early on, was that we’d see activity not only in the PD—L1 positive cohort, where you really expect single-agent nivolumab or single-agent anti–PD-1 to do well, but we’ve also seen very good responses and deep responses into the PD–L1 negative group, where anti–PD-1 is not necessarily doing a great job into those patient populations.

The same thing with non—small cell lung cancer. And those 5 patients, who all of them were PD–L1 negative, 3 out of those were responders and 2 out of these PD–L1-negative responders converted to be complete responders. And that’s the encouraging part. Obviously, the data have to be matured more. These are preliminary safety and efficacy data, so we’ll have to see how these data mature and translate into the final form. But the encouragement, and why we call it promising, is because of the results that we really see into the PD–L1 negative population.

And to further encourage us to see, we also reported at this meeting about 10 patients with urothelial cancer, where 6 out of 10 were responders and 3 out of these responders were PD-L1 negative. And 2 out of these 3 PD—L1-negative responders also achieved a complete response. I think some of them were unconfirmed complete responses. But nonetheless, these patient populations in urothelial cancer who are PD–L1 negative carry poor response rate to single-agent immunotherapy.

And recently, the FDA alerted us that they stopped enrolling single-agent anti—PD-1 because it was inferior to chemotherapy. So, that’s indicating that these patients are really an unmet need. And when you see responses, this is encouraging. Very early data, very preliminary data, but when you talk about the promise, that is the source of the promise: the deep responses and PD–L1 negative status.

The data presented at ASCO demonstrated that NKTR-214 in combination with nivolumab achieved the prespecified efficacy criteria for first-line metastatic melanoma, first-line renal cell carcinoma, and first-line urothelial cancer. So, at the moment, I think the plan is to go to registrational randomized trials to test the true efficacy, which is the ultimate test to see if these drugs truly demonstrate superiority over single agents and on the standard of care.

So, in melanoma, the randomized trials will be NKRT-214 plus nivolumab against nivolumab. And if this trial demonstrates superiority, then I think this regimen could be the first standard of care. Obviously, we have to wait for this trial to start and mature to see the results. 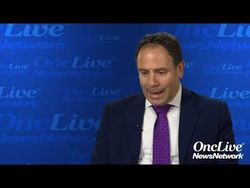 Immunotherapy Progress in Oncology and the Role of IL-2