Patients with HER2-positive uterine serous carcinoma had a greater than 50% improvement in progression-free survival when treated with trastuzumab and chemotherapy versus chemotherapy alone, a small randomized trial showed. 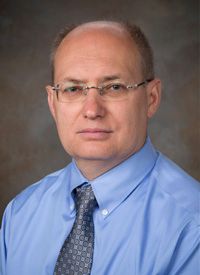 Patients with HER2-positive uterine serous carcinoma (USC) had a greater than 50% improvement in progression-free survival (PFS) when treated with trastuzumab (Herceptin) and chemotherapy versus chemotherapy alone, a small randomized trial showed.

A preliminary survival analysis showed a trend in favor of the trastuzumab arm, which appeared to increase for patients with more advanced-stage disease and those who received the combination as initial systemic therapy, as reported at the 2018 Society of Gynecologic Oncology Annual Meeting.

“The addition of trastuzumab to carboplatin-paclitaxel was well tolerated and increased progression-free survival in both advanced and recurrent uterine serous carcinoma,” said Alessandro D. Santin, MD, a professor of obstetrics, gynecology, and reproductive sciences at Yale School of Medicine.

“These encouraging results deserve further investigation to determine the impact of HER2/neu-targeted treatment on overall survival in women with advanced or recurrent uterine serous carcinoma who overexpress HER2/neu.”

USC has a distinct molecular makeup as compared with the more common endometroid carcinoma, said Santin. USC is characterized by high genomic instability, low mutational burden, and alterations in TP53. Additionally, dysregulation of HER2/neu may occur in more than a fourth of the tumors, and HER2/neu overexpression has been reported in as many as 60% of patients with USC.

The Gynecologic Oncology Group (GOG) evaluated single-agent trastuzumab in advanced or recurrent endometrial cancer with HER2/neu overexpression (GOG 1818). The study did not reach the patient-accrual target, and trastuzumab was considered inactive in HER2+ endometrial carcinoma.

“However, the final analysis of GOG 1818 was flawed in that 47% of the study subjects treated with trastuzumab ultimately did not have tumoral HER/2neu gene amplification,” said Santin. “Additionally, there was no limit on the number of prior lines of chemotherapy, much of the cohort had bulky, measurable, and heavily pretreated recurrent disease.”

Discoveries about USC since the completion of GOG 1818 added to evidence to explain the trial’s negative outcome, he continued. In contrast to breast cancer, USC is highly heterogeneous in HER2/neu expression. Additionally, mutations in the PIK3CA pathway may occur in as many as 60% of HER2/neu-amplified USC and represent a major mechanism of resistance to trastuzumab.

Given that background, investigators at 11 centers in the United States conducted a randomized phase II trial to determine the benefit of adding trastuzumab to carboplatin-paclitaxel chemotherapy in women with HER2/neu+ USC. The trial had a primary endpoint of PFS and secondary objectives that included objective response rate, overall survival, and safety.

The study initially had an accrual goal of 100 patients, which would give the trial the statistical power to demonstrate an improvement in median PFS from 6 months with chemotherapy alone to 10.5 months with the addition of trastuzumab (HR, 0.57). Accrual proceeded more slowly than anticipated, and the trial subsequently closed with 61 patients, 58 of whom were evaluable for the primary endpoint.

Eligible patients had FIGO stage III/IV or recurrent USC; HER2/neu overexpression, defined as 3+ by immunohistochemistry or 2+ by fluorescence in situ hybridization; enrollment within 8 weeks of surgery or diagnosis of recurrent disease; no more than three prior lines of chemotherapy in the case of recurrent disease; a treatment-free interval >6 months from the last carboplatin-paclitaxel regimen for patients with recurrent disease.

The study population comprised 41 patients with advanced disease and 17 had recurrent disease. The median number of prior lines of therapy was one and did not differ between the treatment arms.

All but 1 of the enrolled patients was included in the safety analysis. None of the toxicities differed significantly between treatment arms. One patients in the control arm had a fatal thromboembolism.

“The preliminary overall survival data suggest that the greatest benefit of trastuzumab may be in the upfront setting in those with the most advanced disease,” said Santin. “A statistically more robust analysis of trastuzumab’s effect on overall survival will be conducted once the number of deaths reaches 30.”