Lymphoma expert Andre Goy, MD, discussed the emerging landscape of mantle cell lymphoma (MCL) therapy at the 18th Annual International Congress on Hematologic Malignancies. Several novel agents are being tested in clinical trials for MCL. “This field is changing rapidly,” said Goy, who is chairman and director, and chief of the Lymphoma Division at John Theurer Cancer Center.According to Goy, the progression-free survival (PFS) of more than 5 years that current patients with MCL can experience is attributed to intensive chemotherapy approaches, and particularly, regimens that incorporate a high-dose version of the chemotherapy agent cytarabine. A recent analysis of 167 patients aged <65 years treated with intense chemotherapy regimens who were not on a clinical trial showed that patients treated with a high-intensity regimen had improved PFS and overall survival (OS) compared with those treated with R-CHOP.1

For those patients who are younger, several studies have shown that an induction regimen containing high-dose cytarabine improves outcomes, with a 5-year event-free survival of 56% to 65%. A recent large European trial demonstrated that high-dose cytarabine in addition to R-CHOP significantly increased complete response rates and prolonged time to treatment failure from 46 months to 88 months (P = .038) in patients aged <65 years.2 “This trial showed that the benefit of cytarabine is related to patients achieving minimal residual disease sooner and faster,” said Goy.

Still, there is a great need for novel therapies, as about 50% of patients are not eligible for intensive chemotherapies, and a relatively high relapse rate and chemoresistance persists. The MCL treatment scheme of chemotherapy followed by a transplant and more chemotherapy for those who relapse or become chemorefractory is not sufficient, said Goy, as the median duration of response in relapsed MCL is only 6 to 8 months with chemotherapy. “The new landscape is growing enormously and we have new options,” said Goy. “Agents are now being tested and approved in the relapsed and refractory setting and are slowly being moved into frontline treatment.”

Novel Agents in Development in the Relapsed Setting

One goal of new trials is to test whether the addition of novel therapies, such as bortezomib (Velcade) or ibrutinib (Imbruvica), to a chemotherapy backbone will achieve an earlier and deeper response in MCL. The second goal is to prevent relapse with either consolidation or maintenance therapy. A recent frontline study showed that adding bortezomib as either a maintenance or consolidation therapy improved 3-year PFS from 59% to 67% (P = .0086) in a 151-patient trial.3“R-CHOP alone is not enough for these patients,” said Goy. Researchers are evaluating whether bortezomib has a role in the frontline setting for elderly patients. Bendamustine (Treanda) plus rituximab (Rituxan) may be a new backbone that can be combined with novel agents, including bortezomib. Ongoing studies, such as the ECOG 1411 trial and a GOELAMS trial, are testing these combinations. Goy said that he believes that maintenance approaches will be part of routine MCL regimens in the future, based on improvement in survival of patients receiving maintenance after R-CHOP.The goal of studies with newer agents is to get away from using chemotherapy in MCL. Bortezomib has been approved by the FDA since 2006 for treating MCL patients who had received one prior therapy. In 2009, updated results of the phase II PINNACLE trial, which involved 134 relapsed/refractory MCL patients, showed that single-agent bortezomib had an overall response rate of 33%, a complete response rate of 8%, and a median duration of response of 10 months.4 Since then, combination trials, such as bortezomib with rituximab and dexamethasone, have been building on the initial efficacy of bortezomib as a single agent. Currently, second-generation proteasome inhibitors, including carfilzomib (Kyprolis), are also in clinical trials in MCL.

Another group of agents being evaluated in relapsed/ refractory MCL are mTOR inhibitors. In a 162-patient phase III trial, the median PFS with temsirolimus (175 mg weekly for 3 weeks followed by 75 mg weekly) was 4.8 months compared with 1.9 months in the investigator’s choice arm.5 “The benefit was marginal but sufficient enough for approval in Europe in a relapsed setting based on this trial,” said Goy. Temsirolimus combined with rituximab could be a new treatment option and trials are ongoing in the frontline setting.

The immunomodulatory agent lenalidomide was approved in 2013 for use in relapsed or refractory MCL patients. The approval was based on the single-arm EMERGE study, which involved 134 heavily pretreated patients (median of four prior therapies). The overall response rate with single-agent lenalidomide was 28% and the median duration of response was 16.6 months.6 A patient subset analysis showed that there were clear responses for all patient characteristics analyzed.

There are several ongoing trials combining lenalidomide with agents such as rituximab, bortezomib, or both in the relapsed MCL setting. “The most exciting of these combinations is rituximab plus lenalidomide,” Goy noted. In a phase II first-line, chemotherapy-free trial of 31 patients, the overall response rate with the combination was 77% and the complete response rate was 40%.7 “These are early results but are very promising,” said Goy.

Other agents in development are predominantly focused on targeting the B-cell receptor pathways important in MCL. Idelalisib, an oral PI3K delta isoform inhibitor, was tested in a phase I trial in relapsed/ refractory MCL and had a response rate of 69% in patients receiving a dosage of ≥150 mg twice daily.8

ABT-199, an oral second-generation BH3 mimetic which inhibits BCL-2, is also being examined in MCL. In a single-agent phase I study, all eight relapsed MCL patients had a partial response to treatment with ABT-199.9

Ibrutinib, an oral inhibitor of BTK, was approved by the FDA for MCL in November 2013 based on a phase II clinical trial showing a response rate of 68%, including a complete response rate of 21%, in patients who had received at least one prior therapy.10

“It’s a very exciting time in MCL and we need to focus on new clinical trials to develop nonchemotherapy options for elderly patients,” Goy concluded. 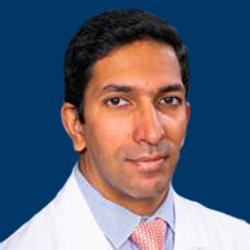