EP: 5.Practical Advice on Use of Maintenance Therapy in mUC

EP: 7.Key Takeaways on the Management of Metastatic Urothelial Carcinoma

Ignacio Durán, MD, PhD: What do you do with a patient who has received what we consider the standard: chemotherapy followed by maintenance immunotherapy? To me, the answer with the highest level of evidence is enfortumab vedotin [Padcev]. Enfortumab vedotin [Padcev] is an antibody-drug conjugate that has been tested in a phase 3 trial comparing this drug vs chemotherapy of choice, and it demonstrated significant survival benefit. If want to be academic, the No. 1 choice should be enfortumab vedotin [Padcev]. There are other choices. You could have tested your patient for FGFR mutations which is something we tend to do in my clinic. If the patient has a mutation in FGFR perfusion, you could use erdafitinib [Balversa], which has advantages and disadvantages. One advantage is that it’s an oral medication. The disadvantage is that the data that we have for erdafitinib [Balversa] doesn’t come from a phase 3 randomized trial; it comes from a phase 2 trial. The activity was remarkable and comparable to enfortumab vedotin [Padcev] in terms of overall response rate, but it’s not a randomized phase 3 trial.

How is adjuvant therapy going to influence our treatment decisions in the near future? We don’t have data level 1. In our clinic we’re looking at the timing between the end of the adjuvant treatment and the relapse. We’re setting a limit of 12 months. If we have a patient who’s received adjuvant treatment and then has a relapse 12 months later, I’d consider that patient to be I/O [immuno-oncology]–free. I’d treat this patient the same way I treat any patient with metastatic bladder cancer. However, if the relapse happens within 12 months following the conclusion of adjuvant therapy, then I’d have to deal differently. I’d have to consider that the patient most likely is not going to benefit from any I/O approach in that context. 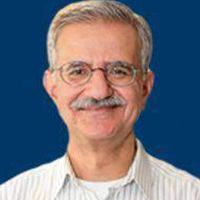