For the past 3 decades, Carlos L. Arteaga, MD, has focused his research on drug-resistant breast cancers, seeking to identify the causes of resistance and proposing combination therapies to beat that resistance. 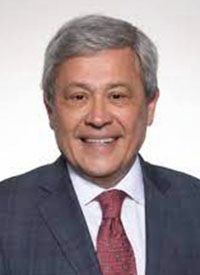 When Carlos L. Arteaga, MD, reflects on the people who have influenced his career and his contributions to the prevention and cure of breast cancer, his first thoughts go not to his physician father or any of his notable mentors.

Instead, he thinks first about the patients who have volunteered as research participants, making it possible for him and others to uncover treatments that will benefit subsequent generations.

“I thank these patients for their courage, their example, and the shining light they provide, because it illuminates the research we do and the application of it,” said Arteaga, who since September 2017 has served as director of the Simmons Comprehensive Cancer Center and associate dean of oncology programs at the University of Texas Southwestern (UTSW) Medical Center in Austin.

Arteaga played a crucial role in identifying what roles insulin-like growth factor receptors and transforming growth factor-β in breast cancer progression and in exploring how they might be targeted for treatment. He contributed to the development of a treatment for HER2-mutated cancer that combines chemotherapy with trastuzumab (Herceptin), a monoclonal antibody that stops cancer cells from growing and dividing. Forty years ago, HER2-mutated breast cancer was among the deadliest cancers. Now it’s one of the most curable.

Further, Arteaga was one of the first researchers to report on cellular alterations that confer resistance to therapies targeted to the ERBB family of receptors, including HER2, which is known to be amplified in approximately 20% of all breast cancers. He also was among the first investigators to observe that loss of tumor suppressor PTEN confers resistance to ERBB receptor–targeted therapies, and his work identified the role of aberrant PI3K signaling and HER2-activating mutations on resistance to estrogen receptor-targeting therapies.

“We always try to understand the ‘why,’ ” he said. “[If] we find a smoking gun, we want to know how the smoking gun does it.”

Arteaga, past president of the American Association of Cancer Research, the world’s largest cancer research organization, noted the incredible improvements in cancer outcomes between the 1980s, when he began his postgraduate training, and today.

“In the 2000s, the idea that breast cancer was generally a lethal disease was flushed down the toilet,” he said. “It became very clear that there were major improvement in patient outcomes as a result of research, clinical trials, and early mammography screening.”

Looking ahead, Arteaga predicts that as more people live longer and with cancer being a disease associated with aging, we may see more cancers in future years, However, with early detection and continuous advances in therapy, the overwhelming majority of these are likely to be caught early and be cured.

“Today, even patients with advanced cancer can have a long life,” he said. “Some cancers will continue to be a serious problem, like brain, ovarian, [and] pancreas cancers—they’ll still be very challenging. But in terms of the big ones—lung, colon, breast, prostate—we’re going to see more, but that doesn’t mean they’re going to be incurable.”

‘They Let Me Hang Around’

Arteaga grew up in the port city of Guayaquil, Ecuador, the oldest of 4 children. His mother was a homemaker. His father was a physician and professor who eventually became a dean at Universidad de Guayaquil’s medical school. Both parents made sure their children realized they were privileged in a country where not everyone’s basic needs—shelter, food, education, health—were being met. They encouraged their children to do more: Study another language, consider life in other countries, help others, understand “that it was OK to just open our wings and go,” Arteaga said.

Medicine was basically the family business, Arteaga said. Two of his great-uncles had also been physicians and his father maintained offices in the family home and at the university. “My father brainwashed me into becoming a doctor, starting in elementary school,” Arteaga joked. “I thought it was a cool thing to do.”

After college, he wanted to study medicine in the United States, but it was cost prohibitive, even for the son of a university administrator and practicing pulmonologist. Instead, Arteaga attended the medical school in Guayaquil, where his father was dean. There, he often served as a simultaneous translator for visiting American physicians, including Joseph E. Murray, MD. Murray won the Nobel Prize in Physiology or Medicine for performing the world’s first successful transplant of an organ from one living person to another at Boston’s Peter Bent Brigham Hospital in 1954.

“He was royalty at Harvard,” Arteaga remembered. Thanks to Murray’s help, Arteaga did 2 long stints as a visiting student at Peter Bent Brigham Hospital, experiences that further convinced him he needed to study in the United States.

After a stretch in Boston, Arteaga stopped in Atlanta, Georgia, before returning to Ecuador, to visit a friend who was studying at Emory University School of Medicine. Arteaga spent a month in Atlanta, primarily at Grady Memorial Hospital. “They let me hang around,” he said. “They saw me in action, and they said, ‘If you apply here, we’ll give you a spot in the residency.’”

Arteaga graduated from Facultad de Ciencias Médicas in Guayaquil in 1981, then became just the second graduate of a foreign medical school accepted into Emory’s internship and residency programs. He initially pursued cardiology, but that changed when, as a third-year resident, an inspiring attending physician took him on rounds into the oncology ward.

Arteaga was struck by the attending physician’s empathy as well as his clinical and scientific knowledge. And he was taken by the bravery and strength of the patients who endured so much without knowing if their treatment would be successful.

“I saw the early cures. I saw the promise,” Arteaga said. “We knew so little about cancer back then. I realized I would be able to ask interesting and challenging research questions.”

Timely Guidance From a Mentor

Arteaga completed his work at Emory, then moved west for a fellowship in medical oncology and hematology at The University of Texas Health Science Center at San Antonio. There he worked closely with C. Kent Osborne, MD, and the late, legendary William L. McGuire, MD, who coined the term “breast cancer translational research” and who discovered the use of the estrogen receptor as a biomarker in breast cancer.

With Osborne, Arteaga learned the endocrinology and role of growth factors in breast cancer. He also considered McGuire a key mentor. “Anything you saw him do, you wanted to emulate. He always aimed for perfection in [conducting and presenting] research. He always planned ahead. He was also extremely competitive. All of those things I remember of him and they also shaped me.”

San Antonio, Arteaga says, “was just a great place to work. We were young physician/scientists doing trials with some senior people already well known in the field,” including Osborne, who would later become the founding director of the Dan L. Duncan Comprehensive Cancer Center at the Baylor College of Medicine. “It was just magical for someone with a budding career in translational research.”

Arteaga’s passion for research thrived at in Texas. “I worked my butt off. I wrote and published a bunch of papers. I got an early grant for a young investigator award. I knew what I wanted to do,” he said.

When he was wrapping up his time in Texas and looking for another job, McGuire told Arteaga to let him first contact the leadership at any institution that seemed interesting to him. He believes McGuire’s influence and support played a role in him getting a job as assistant professor of medicine at Vanderbilt University in 1989 in Nashville, Tennessee.“

My letter, they would have thrown in the trash, but not his letter,” Arteaga said. “I’ve done the same for people I’ve trained.”

At Vanderbilt, Arteaga focused on translational research. By 1996, he was leading the breast cancer program at Vanderbilt-Ingram Cancer Center. Although research was his primary focus, Arteaga continued to see patients during his time in Nashville.

“The work I do is not basic science. It’s translational research, in between basic discovery and standard clinical care. It’s important to understand the needs of patients, the trends in clinical care, that leading edge, the horizons,” he said. “Having that patient contact is a constant reminder of those needs so we can shape the work we do in the laboratory.”

Arteaga spent 28 years at Vanderbilt. He served in several positions, including director of the Center for Cancer Targeted Therapies, director of the breast cancer program, and associate director of translational and clinical research at the Vanderbilt-Ingram Cancer Center.

“Our group was one of the first to test drugs in patients directly to understand how they worked in short presurgical (aka window) trials where we’d use a drug before a patient has a mastectomy or lumpectomy, then score the cellular and molecular effect on the operated cancer to try to understand how it works, [and if we used] the right dose,” he said. “We did this in a way that is deliberate and safe, that has the buy-in of the patient even though the information generated might not be helpful to her but to other patients with the disease.”

In 2017, Arteaga got an unexpected job offer: Would he be willing to move to Texas to join UTSW? He hadn’t been looking to leave Nashville, but the more he learned about the opportunities in Texas, the more he realized he needed to take the job.

“I didn’t leave Vanderbilt. I came here. There’s a difference,” he said. “This was just a great opportunity here in Texas that I found difficult to pass up, where I felt I could have a larger impact than I’d had at Vanderbilt. Like Vanderbilt, UT Southwestern also has a [National Cancer Institute]–designated center and my job was to continue that mission in a larger city with greater access, a diverse and generous community, and a legislature that had already allotted billions for cancer science through the Cancer and Prevention Research Institute in Texas (CPRIT).”

Despite his large administrative and institutional and national service duties, he still makes time for research. Arteaga considers his role at UTSW as “the advocate-in-chief of cancer science,” noting that “every day here is very full and rewarding.” In addition to his role at UTSW, Arteaga cochairs the annual San Antonio Breast Cancer Symposium; serves on the advisory boards of nonprofits, including Stand Up to Cancer and Susan G. Komen, and at least 8 NCI-designated Cancer Center External Advisory Boards; sits on multiple award committees; and provides editing and insight to multiple scientific publications.

“I’m on a list of people whose opinion, for some reason, is considered of value, and I do believe it’s part of academic citizenship to always offer our opinion and experience and work with others,” he said. “We also learn from others.”