The longest follow-up from the study (median 17.6 months) was available for patients receiving a 150 x 106 dose of bb21217, which was the lowest dose explored in the study. In this cohort, the complete remission (CR) or stringent CR (sCR) rate was 33% and the VGPR rate was 50%, for an objective response rate (ORR) of 83%. All patients in this group were MRD-negative and the median duration of response was 11.1 months.

"In the 150 x 106 dose cohort, the median duration of response is promising at 11.1 months. In the higher dose cohorts, follow up is short but there are no confirmed responders who have progressed," Jesus G. Berdeja, MD, from the Sarah cannon Research Institute, said during a presentation of the results. "The safety profile of bb21217 in this phase I study of relapsed/refractory multiple myeloma remains consistent with known toxicities of CAR T-cell therapies."

As part of the bb21217 manufacturing process, the CAR T-cell therapy bb2121 is cultured with the PI3 kinase inhibitor bb007 to enrich for T cells with a memory-like phenotype. In preclinical experiments, bb2121 and bb21217 both eliminated an initial tumor in mice; however, when rechallenged with a second tumor in the same mouse, only bb21217 prevented the tumor from growing without retreatment. Additionally, bb21217 also showed higher levels of CCR7 and CD27 compared with bb2121, suggesting higher levels of memory-like T cells, and bb21217 had lower levels of CD57, a marker of T cell exhaustion.

Across the study, 41 patients underwent leukapheresis, with 1 withdrawing and 2 receiving the infusion after the data cutoff. There was a 100% manufacturing success rate, although 3 patients were required to undergo remanufacturing prior to treatment. Patients were allowed to receive bridging therapy during the manufacturing process.

"[Time from leukapheresis to infusion] was about 4 to 5 weeks, which is standard for most of these targeted CAR T cells," said Berdeja. "Bridging therapy was left up to the individual investigator but I suspect that about half if not two-thirds of patients had bridging therapy."

The median follow-up for patients in the 300 x 106 and 450 x 106 doses was 4.0 and 3.3 months, respectively. At these early assessments, the ORR in the 300 x 106 dose arm was 43%, which included a VGPR rate of 29% and a partial response (PR) rate of 14%. However, Berdeja warned that with the short follow up, these numbers were misleading, as some patients were not included in the analysis.

"Many of these patients had not reached 2 assessments to have a confirmed response and were left off the overall response for these percentages, especially for the 450 group," he said. "As is expected with CAR T cells, the responses will deepen over time."

"bb21217 drug product is enriched for memory-like T cells, which are associated with robust CAR T cell expansion and less disease progression at month 6," said Berdeja. “Long-term CAR T-cell persistence was observed in 8 of 10 evaluable patients at month 6 and 2 of 2 at month 18.”

All-grade cytokine release syndrome (CRS) occurred in 66% of patients, most of which was grade 1 or 2 in severity; however, 1 patient had a grade 5 CRS event at the 450 x 106 dose. The median time to onset of CRS was 3 days and the median duration of CRS was 4 days. Neurotoxicity occurred in 24% of patients. There were 2 grade 3 events and 1 grade 4 event, with the remainder being grade 1 or 2. The median time to neurotoxicity onset was 7 days. 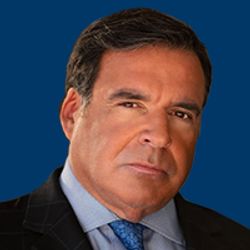 Dr. Manasanch on Key Takeaways From CASSIOPEIA in Multiple Myeloma