Alan P. Venook, MD, discusses the significance of the findings of the international IDEA study investigating doses of FOLFOX for patients with colon cancer.

FOLFOX has been the standard chemotherapy regimen for patients with stage III colon cancer, but it can cause peripheral neuropathy in almost every patient, creating a negative impact on quality of life, explains Alan P. Venook, MD.

The IDEA trial, therefore, investigated the dosage of FOLFOX by giving patients 3 months of chemotherapy versus 6 months. The trial enrolled over 12,000 patients into 6 international studies to evaluate the noninferiority of each dosing schedule and disease-free survival (DFS). With a median follow-up of 39 months, 3263 DFS events were observed. Overall, the DFS rate at 3 years was 74.6% for 3 months of FOLFOX versus 75.5% for 6 months (HR, 1.07; 95% CI, 1.00-1.15).

“What we would like to see from analyses in the future is some clarity as to the right number of doses that maintains curability and is not likely to cause neuropathy,” says Venook.

OncLive: Can you provide some background on the IDEA study and the significance of it?

In an interview during the 2018 OncLive® the State of the Science SummitTM on Gastrointestinal Cancers, Venook, The Madden Family Distinguished Professor of Medical Oncology and Translational Research at the University of California, San Francisco Helen Diller Family Comprehensive Cancer Center, discussed the significance of the findings of the international IDEA study investigating doses of FOLFOX for patients with colon cancer.Venook: The challenge in the management of colon cancer has been our inability to get beyond FOLFOX, which is the chemotherapy that was shown to be helpful in curing more patients in the adjuvant setting back in 2004. The problem with the drug is that it causes peripheral neuropathy in almost every patient. Somewhere between 7 and 8 doses into treatment is the average time of onset neuropathy.

The IDEA trial was a pooled analysis from 6 different groups around the world investigating the question of whether you could get away with less chemotherapy. If you could use 6 cycles you might eliminate neuropathy, and if it was equally effective that would be great. Every other story of adjuvant therapy has shown that you can get away with less therapy than previously thought.

The first study to be designed like that was an Italian trial that asked whether you could give FOLFOX for 3 versus 6 months. Subsequently, there was an international agreement amongst colon cancer researchers in recognition that this was an important question to investigate. Six trials were planned around the world, similar to the Italian study which had already started, and we agreed to pool the data to increase the statistical power and answer the question clearer.

It turns out that once enough data had been accumulated and looked at, the data show almost exactly similar survival between patients who get 3 months versus 6 months around the world. This is over 12,000 patients with stage III colon cancer. The issue, though, is how they designed the analysis. As a statistician who designed the analysis, they had a statistical endpoint. They used what is called noninferiority to make sure that patients were not jeopardizing their chance of being cured by taking less chemotherapy.

Even though the difference in DFS was less than 1% across all arms, it did not meet the criteria for being statistically noninferior so, technically, you could say that 3 months is not as good.

This is an individualized decision, but what the IDEA investigators did is look at a subset of patients who appeared to be at higher risk; these were mainly patients with many positive lymph nodes. Those patients generally needed 6 months of treatment versus 3. One thing that will come out when the paper is published, is that the authors will say that, “You could distinguish a difference between FOLFOX and CAPOX [capecitabine combined with oxaliplatin] Capecitabine was used as a substitute at the discretion of many of the doctors.

In 5 of the studies, either CAPOX or FOLFOX was permitted, but we only use FOLFOX in the United States and Canada. That was not a randomized decision; it was made by the doctors and patients. In some of these subset analyses, it looked like the patients who received capecitabine did better. That may be true, but I am hard-pressed to see how you can conclude that when it is not a randomized decision. In the United States and Canada, we did not use CAPOX in our study that contributed to the pooled analysis, since capecitabine is poorly tolerated in some patients.

Is the optimal number of doses of FOLFOX being investigated?

This has been such a landmark study. What is the importance of having a large international trial?

The take-home message is that many patients with low-risk stage III colon cancer can get away with 3 months of therapy. That is a discussion that you need to have with the patient, but they need to be aware that they are putting themselves at a slight risk for cancer recurrence. Patients with higher-risk disease should go to 6 months of therapy. My own approach would be to treat patients for at least 3 months and, if they are tolerating the FOLFOX well, you can continue a bit further. It is noteworthy that the studies encouraged the doctors to reduce the dose of FOLFOX if the neuropathy continued in the control arm. Very few patients got as much as 12 doses and yet there is a big difference in neuropathy. There is a sweet spot in the 7th or 8th dose of FOLFOX.With all the patients that we have, that is an analysis that we can do retrospectively. The challenge in colon cancer is that we lump these patients by lymph node status. None of us believe that is the best prognostic factor. I hope subsequent studies will investigate other biological markers to distinguish differences between colon cancer that would hold more hope than lymph nodes.The collaboration is great. However, the problem is the purists, meaning people who look at the statistics as being the most important, might say that the study was negative. The discussion at the 2017 ASCO Annual Meeting [was focused on that]; however, most of us believe that it is more nuanced than that. Noninferiority is an extremely complex question, so what we need to do is find a balance. What risks are you willing to take in terms of slightly increased risk of cancer recurrence versus living with neuropathy.

Part of the problem is where they set the statistical threshold. There was a group of cancer survivors and oncologists who chose what degree of neuropathy they were willing to accept when they were designing this study. This is a paradox, because the cancer survivors who had FOLFOX and are living with neuropathy, but they figured it was okay because they are alive. In a way, having survivors may be biased in accepting more neuropathy than others. It is speculative, but the way they came up with the numbers is subject to that interpretation.

Looking towards the future, is there anything else you hope to answer from this study?

Finally, you are co-chair of this State of the Science SummitTM. Could you comment on the importance of having an event like this?

I do not know if any of the advocates had severe neuropathy. However, you can imagine that those are not an unbiased population of patients because they survived colon cancer and I am sure they all had chemotherapy.I would like to see different doses as opposed to only 3 months and 6 months. However, we don’t have the time or energy to do 6 months versus 9 months, for example. My own view is that everyone will come to their own conclusions. The truth is that the difference is so small that it is hard to say one is any different than the other. It is always good for myself to watch my own faculty speak. We have a great group, so it is fun to watch them present. You also see the breadth of our group and their research for anyone who does not think we are making progress. When you come to a meeting like this, you can see how much progress is being made. The field has moved so rapidly in the last couple of years. We are not stagnant. These are young faculty who are the leaders of the future. 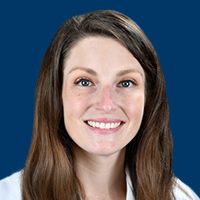